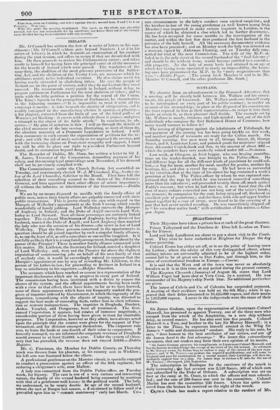 We observe from an advertisement in the Greenock Advertiser, that a meeting will be shortly held between Mr. Wallace and his consti- tuents, the people of Greenock. Mr. Wallace professes himself ready to be interrogated on every part of his public conduct ; to render an account of his stewardship ; to place at the disposal of his constituents the trust reposed in him as their representative—to resign it into their hands. or retain it, as their pleasure shall decide. The example set by Mr. Wallace is manly, virtuous, and high-minded : butt, out of the 658 individuals who compose the first Reformed House of Commons, how many would venture to follow it ?

The issuing of diligences against the inhabitants of Edinburgh, for non-payment of the annuity tax has been going briskly on this week, and another gaolful of recusants are ready for the Calton march. On Saturday morning, five men went to 57, George Street, 59, George Street, and 9, Lauriston Lane, and poinded goods for ministers' stipend from Alexander Cruickshank and Son, to the amount of about 3000.— which the 'minders have very modestly valued under 501.—Scotsman.

Last week, at Glasgow, an Irish beggar, who was levying contribu- tions on the tender-hearted, teas brought to the Police-office. He had different bags for all the different kinds of provisions he could col- lect,—a bag for meat, another for meal, another for praties, another for herrings, &c., and also a vessel for soup. He had been so successful in his vocation, that at the time of his arrest his bag contained a week's provision at least. The Police-officer by whom he was captured con- jectured that the rags by which he was covered concealed something more than his nakedness ; and proceeded to strip them off, much against Paddy's consent ; but when he had done so, it was found that the old coat of many colours concealed one not long out of the tailor's hands ; the trousers, fit companion for the coat, being stripped off, disclosed an excellent pair of pantaloons ; and the hoes, with sole and upper leather bound together by a rope of straw, were found to be the covering of a pair that had never Deeded mending. He was immediately shipped off to " his own dear native land," with certification of his merits.—Glas- gow Argus.