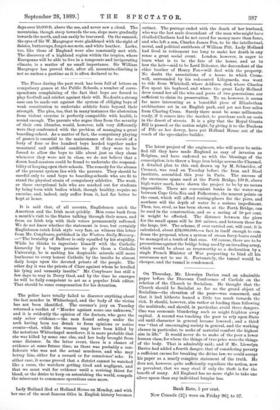 Page 3, 28 September 1889 — The latest project of the engineers, who will never be
Close

The latest project of the engineers, who will never be

satis- fied till they have made England as easy of invasion as Belgium, and have endowed us with the blessings of the conscription, is to throw a huge iron bridge across the Channel. A detailed plan to this end, drawn up by M. Schneider, of Creuzot, was read on Tuesday before the Iron and Steel Institute, assembled this year in Paris. The success of the enormous spans used at the Forth Bridge, 130 ft. above high-water mark, have shown the project to be by no means impossible. There are convenient banks in the water-way between Cape Gris-Nez and Folkestone, the nearest points on the coast, which will afford resting-places for the piers, and nowhere will the depth of water be a serious impediment. Then, too, steel, as has been shown at the Forth Bridge, can be used in the construction, and so a saving of 50 per cent. in weight be effected. The distance between the piers for the small spans will be 300 metres, and between those for the large, 500. The scheme, if ever carried out, will cost, it is calculated, about £34,000,000,—a fact in itself enough to con- demn the proposal, when a system of steam ferry-boats could be managed at a tenth of that sum. Of course, there are to be precautions against the bridge being used by an invading army, which would be about as trustworthy as a declaration by a single French Minister of War purporting to bind all his successors not to use it. Fortunately, the tunnel would be cheaper, and the tunnel is condemned.