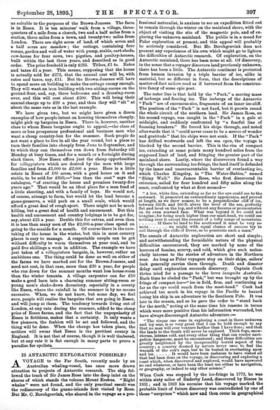 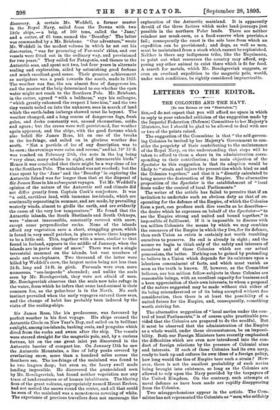 Page 13, 28 September 1895 — IS ANTARCTIC EXPLORATION POSSIBLE P A VOYAGE to the Far
Close

IS ANTARCTIC EXPLORATION POSSIBLE P A VOYAGE to the Far

South, recently made by an

Australian whaling-vessel, has once more drawn attention to projects of Antarctic research. The ship fol- lowed the track of Sir James Rosa into the deep inlet on the shores of which stands the volcano Mount Erebus. " Right whales" were not found, and the only practical result was the rediscovery of the guano-islands first visited by Boss. But Mr. C. Borchgrevink, who shared in the voyage as a pro-

fessional naturalist, is anxious to see an expedition fitted out to remain through the winter on the mainland shore, with the object of visiting the site of the magnetic pole, and of ex- ploring the unknown mainland. The public is in a mood for Polar exploration at present, and this appeal will probably be seriously considered. But Mr. Borchgrevink does not present any experiences of his own which might go to lighten the difficulties of Antarctic research. Of exploration, on the Antarctic mainland, there has been none at all. Of discovery, in the sense that a voyager discovers land previously unknown, there has been a little. The Antarctic continent is protected from human invasion by a triple barrier of ice, alike in material, but so different in form, that the descriptions of matter-of-fact sailors read as if borrowed from the construc- tive fancy of some epic poet.

The outer line is that held by the " Pack," a moving mass of icebergs and floating ice. The icebergs of the Antarctic " Pack " are of enormous size, fragments of an inner ice-cliff.

The position of the " Pack " is not fixed, but it prowls round the whole circuit of the southern land. Sir James Ross, on his second voyage, was caught in the " Pack " in a gale at midnight, and suddenly confronted by "a fearful line of foaming breakers." He forced his ships through, and noted afterwards that it " could never cease to be a source of wonder and gratitude" that his ships were not sunk. If the " Pack " has drifted westwards and left the sea open, the voyage is blocked by the second barrier. This is the rim of compact ice, extending at some points many hundred miles from the supposed limit of land, and fringing the greater part of the mainland shore. Lastly, where the discoverers found a way through the surrounding ice-fringe, the land itself is defended by the inner and unsurmountable barrier of everlasting ice, which Charles Kingsley, in " The Water-Babies," named " Shiny Wall." Sir James Ross, who first discovered its existence, sailed for four hundred and fifty miles along the coast, confronted by what at first seemed-

" A low, white line, extending as far as the eye could see to the eastward. It presented an extraordinary appearance, and proved at length, as we drew nearer, to be a perpendicular cliff of ice, between 150 ft. and 200 ft. above the level of the sea, perfectly flat and level on the top, and without any fissures or promontories on its even seaward face. What was beyond it we could not imagine ; for being much higher than our mast-head, we could see nothing over it except the summit of a lofty range of mountains.

If there be land to the southward it must be very re- mote we might with equal chance of success try to sail through the cliffs of Dover, as to penetrate such a mass."

The annals of Antarctic exploration are short and simple; and notwithstanding the formidable nature of the physical difficulties encountered, they are marked by none of the horrors of famine, scurvy, and cold, which give such melan- choly interest to the stories of adventure in the Northern seas. As long as Polar voyagers stay on their ships, sailors' luck generally carries them through. Death and disaster

delay until exploration succeeds discovery. Captain Cook thrice tried for a passage to the terra incognita Australia. Each time he eluded the "Pack," but was brought up by the fringe of compact ice—" ice in field, firm, and continuing as far as the eye could reach from the mast-head." Cook had achieved too much in his voyage in the Pacific to hazard losing his ship in an adventure to the Southern Pole. It was

late in the season, and so he gave the order to " stand back for the north," noting at the same time his reasons in terms which were more positive than his information warranted, but have always discouraged Antarctic adventure :—

" The risque one runs in exploring a coast in these unknown and icy seas, is so very great that I can be bold enough to say that no man will ever venture farther than I have done; and that the lands to the South will never be explored. Thick fogs, snow- storms, intense cold, and every other thing that can render navi- gation dangerous, must be encountered ; and these difficulties are greatly heightened by the inexpressibly horrid aspect of the country ; a country doomed by nature never once to feel the warmth of the sun's rays, but to lie buried in everlasting snow and ice It would have been rashness to have risked all that had been done on the voyage, in discovering and exploring a coast which, when discovered and explored, would have answered no end whatever, or have been the least use either to navigation, or geography, or indeed to any other science."

When Cook was stopped by the ice-fringe in 1773, he was

within sixty miles of Enderby Land, discovered by Billet* in 1831; and in 1823 his surmise that his voyage marked the probable limit of future discovery was contradicted by one of those " surprises " which now and then occur in geographical discovery. A certain Mr. Weddell, a former master in the Royal Navy, sailed from the Downs with two little ships, — a brig, of 160 tons, called the Jane,' and a cutter, of 65 tons, named the 113eaufoy.' The latter was commanded by a Mr. Brisbane. " Our adventure," wrote Mr. Weddell in the modest volume in which he set out his discoveries, "was for procuring of Fur-seals' skins, and our vessels were fitted out in the ordinary way, and provisioned for two years." They sailed for Patagonia, and thence to the Antarctic seas, and spent not two, but four years in alternate sealing and exploration, aided by astonishing good fortune and much excellent good sense. Their greatest achievement as navigators was a push towards the south, made in 1S23. The weather was fine, the sea almost free of dangerous ice, and the master of the brig determined to see whether the open water might not reach to the Southern Pole. Mr. Brisbane, in the cutter, agreed "with a boldness," says his colleague, "which greatly enhanced the respect I bore him," and the two tiny vessels sailed on into the unknown seas in search of land which the earth-laden icebergs showed must lie beyond. The weather changed, and a long course of dangerous fogs, fresh gales, and decks constantly wet, caused rheumatism, colds, and agues ; but the crews were well provisioned, fine weather again appeared, and the ships, with the good fortune which also befell Sir James Ross, hit on one of the breaks in the ice-fringe, and sailed on in glorious weather due south. " Not a particle of ice of any description was to be seen ; the evenings were calm and serene," and lat. 74° 15' S. was reached on February 20th, the note in the log being "very clear, many whales in sight, and innumerable birds." Hence it was concluded that there might be a way clear of ice to the Southern Pole. The mainland was not reached; but the time spent by the `Jane' and the Beaufoy ' in exploring the Antarctic Island was far longer than that at the disposal of Sir James Ross in his subsequent voyages. Yet Mr. Weddell's opinion of the nature of the Antarctic soil and climate did not differ greatly from Captain Cook's conjecture. It was "a cold, earthless land, with immense ice-islands, which are continually separating in summer, and are made, by prevailing westerly winds, almost to girdle the earth, and are evidently the cause of the very low temperature." He found that the Antarctic islands, the South Shetlands and South Orkneys, were "almost inaccessible, constantly covered with snow, except some perpendicular rocks. None of the islands afford any vegetation save a short, straggling grass, which is found in very small patches, in places where there happens to be a little soil. This, together with a moss, similar to that found in Iceland, appears in the middle of January, when the islands are in parts clear of snow." There was not a single terrestrial mammal on the islands, but vast numbers of seals and sea-elephants. Two thousand of the latter were killed by Weddell's crew, the largest males being not less than 24 ft. long and 14 ft. in girth. Fur-seals were even more numerous, " sea-leopards " abounded ; and unlike the seals seen by Mr. Borchgrevink, they were not afraid of man. Mr. Borchgrevink observes that the seals now take refuge in the water, from which he infers that some land-animal is their common foe, as the polar-bear is in the North. No such instinct prevailed when the early voyagers entered these seas, and the change of habit has probably been induced by the visits of the sealing-ships.

Sir James Ross, like his predecessor, was favoured by perfect weather in his first voyage. His ships crossed the Antarctic Circle on New Year's Day, and sailed on in brilliant sunlight, among ice-islands, basking seals, and penguins which dived from the rocks and swam after the ship. The vessels were steered straight for the magnetic pole, and, by a curious fortune, hit on the one great inlet yet discovered in the Antarctic barrier of compact ice. On January 11th he saw the Antarctic Mountains, a line of lofty peaks covered by everlasting snow, more than a hundred miles across the Southern sea. The ice-fringe of the mainland was found to be two leagues deep ; but even so, the heavy swell made landing impossible. He discovered the guano-island seen by Mr. Borchgrevink, but found neither vegetation nor any trace of land-creatures or of human inhabitants. The blazing fires of the great volcano, appropriately named Mount Erebus, had not melted the snows round the crater, and all that could be seen of the mainland was a monotonous covering of white. The experience of previous travellers does not encourage the exploration of the Antarctic mainland. It is apparently devoid of the three factors which make land-journeys just possible in the northern Polar lands. There are neither reindeer nor musk-oxen, as a food-reserve when provisioLa fail ; consequently the coast is the sole base from which an expedition can be provisioned ; and dogs, as well as men, must be maintained from a stock which cannot be replenished. Neither is there any indigenous tribe, like the Esquimaux, to point out what resources the country may afford, sup- posing any other animal to exist there which is fit for food. A search for metals, which Mr. Borchgrevink suggests, or even an overland expedition to the magnetic pole, would, under such conditions, be rightly considered impracticable.