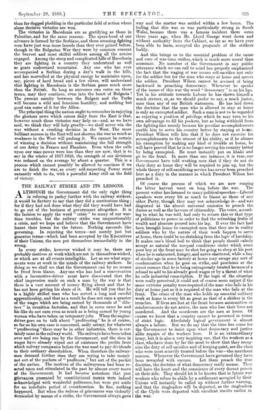 Page 5, 28 September 1918 — THE RAILWAY STRIKE AND ITS LESSONS. A LTHOUGH the Government did
Close

THE RAILWAY STRIKE AND ITS LESSONS. A LTHOUGH the Government did

the only right thing in refusing to parley further with the railway strikers, it would be flattery to say that they did a meritorious thing • for if they had not done what they did they would have had to go out of the business of government altogether. It is the fashion to apply the word crisis " to many of our war- time troubles, but the railway strike was unquestionably a crisis, and we hope and believe that the Government have learnt their lesson for the future. Nothing succeeds like governing. In rejecting the terms—not merely just but generous terms—which had been accepted by the Executives of their Unions, the men put themselves irremediably in the wrong. In every strike, however wicked it may be, there are probably motives at work which are not in themselves wicked, or which are at all events intelligible. Let us see what argu- ments were at work in the minds of the railway strikers. In doing so we shall see that the Government can by no means be freed from blame. Any one who has had a conversation with a locomotive-driver must have discovered that the chief impression made on such a man by the war is that there is a vast amount of money flying about and that he has not been getting his share of it. He will tell you that he is a highly skilled man who has served a long and careful apprenticeship, and that as a result he does not earn a quarter of the wages which are being earned by thousands of " dilu- tees " in munition factories, and that in some cases he and his like do not earn even as much as is being earned by young women who have taken on temporaryjobs. When the engine- driver goes on to talk about 1' profiteering" he is of course, so far as his own case is concerned, sadly astray, for whatever "profiteering "there may be in other industries, there is cer- tainly none in the railway world. The railways have been taken over and are being run by the Government, and the rises in wages have already wiped out of existence the profits from which railway companies before the war used to pay dividends to their ordinary shareholders. When therefore the railway- men demand further rises they are trying to take money not out of the pockets of " profiteers,' but out of the pocket of the nation. The motives of the railwaymen had been re- acted upon and stimulated in the past by almost every move of the Government. It had become notorious that just grievances presented by constitutional means were indeed acknowledged with wonderful politeness, but were put aside for an indefinite period of consideration. In fine, nothing happened. But when the redress of grievances was violently demanded by means of a strike, the Government always gave way and the matter was settled within a few hours. The feeling that this was so was particularly strong in South Wales, because there was a famous incident there some three years ago, when Mr. Lloyd George went down and without authority from the Cabinet, so far as we have ever been able to learn, accepted the proposals of the strikers bodily.

And this brings us to the essential problem of the cause and cure of war-time strikes, which is much more moral than economic. No member of the Government in any public utterance which we can call to mind has properly emphasized the fact that the waging of war means self-sacrifice not only for the soldier but for the man who stays at home and serves the soldier. President Wilson cannot be accused of being backward in preaching democracy. Whenever he speaks of the issues of this war the word " democracy " is on his lips. Yet in his attitude towards Labour he has shown himself a much sterner, or, as we should prefer to say, a much juster, man than any of our British statesmen. He has laid down the doctrine that the man who is allowed to stay at home is only an exempted soldier. Such a man is not to be regarded as enjoying a position of privilege which he may turn to his own advantage to fill his pockets, but as being withheld from the fighting-line merely because his peculiar accomplishments enable him to serve his country better by staying at home. President Wilson tells him that if he does not exercise his accomplishments to the utmost of his ability, or if he abuses his exemption by making any kind of trouble at home, he will have proved that he is no longer serving his country better by being exempted. He must instantly put on khaki and go to the front. In more than one instance, it is true, our Government have told working men that if they do not do their duty at home they will be required to join up, but the whole theory of self-sacrificing service has never been preached here as a duty in the manner in which President Wilson has preached it.

Of course the process of which we are now reaping the bitter harvest went on long before the war. The present writer has listened to many political speeches—Liberal speakers were every bit as much to blame as those of any other Party, though they may not acknowledge it—and was disgusted at the almost universal omission to preach the duties as well as the favours of citizenship. The voter, accord- ing to what he was told, had only to return this or that type of politicians to power in order to find the refreshing fruits of wealth and pleasure poured into his lap. If ever the fact had been brought home to exempted men that they are in reality soldiers who by the nature of their work happen to serve at home, there could be no shrinking from the logic of hardship. It makes one's blood boil to think that people should calmly accept as natural the unequal conditions under which some poor boy at the front may be shot for going to sleep at his post when he is exhausted, hungry, and nerve-shattered, while a boy of similar age in some factory at home may escape any sort of condemnation when he goes on strike, and proclaims at the street corners that he is being outrageously treated because of a refusal to add to his already good wages or by a threat of what he calls industrial conscription. If the logic of the situation were really perceived, it could not of course seem unjust if the same extreme penalty were required of the man who fails in his duty at home just as it is required of the man who fails at the front. The crime of the man who holds up essential military work at home is every bit as at as that of a shirker in the trenches. If lives are lost at the front because ammunition or reinforcements do not arrive, the men who lose their lives are murdered.. And the murderers are the men at home. Of course we know that a country cannot be governed in terms of strict logic. Absolutely logical government is almost always a failure. But we do say that the time has come for the Government to insist upon what democracy and justice alike require of the workers here. It is an extraordinary irony, but it is also a very inspiring one, that the workers as a class, who have done by far the most to show that they recog- nize the duty of self-sacrifice and of keeping quiet, are the class who were most scurvily treated before the war—the merchant seamen. Whenever the Government have governed they have been rewarded with success. Let them preach the true doctrine, the doctrine of what democracy really means. They will have the heart and the conscience of every decent person on their side. They should let it be known that in future war workers who refuse to abide by a settlement accepted by their Unions will instantly be called up without further warning, and that the ringleaders will be deported, as the ringleaders of the Clyde were deported with excellent results earlier in the war.