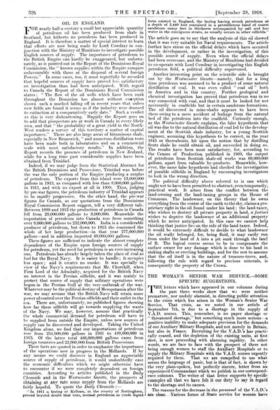 OIL IN ENGLAND. F OR nearly half-a-century a small but appreciable

quantity of petroleum oil has been produced from shale in Scotland, but hitherto no petroleum has been produced in England. It is therefore a matter of special interest to learn that efforts are now being made by Lord Cowdray in con- junction with the Ministry of Munitions to investigate possible English sources of supply. The importance of petroleum to the British Empire can hardly be exaggerated, but unfortu- nately, as is pointed out in the Report of the Dominions Royal Commission, the " known supplies within the Empire compare unfavourably with those at the disposal of several foreign Powers." In some cases, too, it must regretfully be recorded that hopeful sources of supply have proved less satisfactory on investigation than had been anticipated. With regard to Canada the Report of the Dominions Royal Commission states " The flow of the oil wells which have been sunk throughout the Dominion has almost without exception shown such a marked falling off in recent years that unless new fields are found it seems as if the industry were doomed to extinction at a comparatively early date." Such a verdict as this is very disheartening. Happily the Report goes on to add that prospectors are at work in Canada in every likely area, and that " the probability of a great yield in the North- West renders a survey of this territory a matter of capital importance." There are also large areas of bituminous shale, especially in New Brunswick, " and numerous distillation tests have been made both in laboratories and on a commercial scale with most satisfactory results." In addition, the Report records the presence of petroleum in New Zealand, while for a long time past considerable supplies have been obtained from Trinidad.

Indeed, if we may judge from the Statistical Abstract for the British Dominions and Possessions, Trinidad was before the war the only portion of the Empire producing a surplus of petroleum. The exports from this island were 13,000,000 gallons in 1913, as compared with less than 8,000,000 gallons in 1911, and with no export at all in 1909. Thus, judging by pre-war figures, the petroleum industry of Trinidad appears to be rapidly progressive. On the other hand, the pre-war figures for Canada, as our quotations from the Dominions- Royal Commission Report suggest, tell a very different tale. Between 1899 and 1913 the production of petroleum in Canada fell from 28,000,000 gallons to 8,000,000. Meanwhile the importation of petroleum into Canada rose from something over 9,000,000 gallons to 232,000,000. India is a considerable producer of petroleum, but down to 1913 she consumed the whole of her large production—in that year 277,000,000 gallons—and in addition imported 69,000,000 gallons. These figures are sufficient to indicate the almost complete dependence of the Empire upon foreign sources of supply for petroleum, yet the need for petroleum is an ever-increasing one. Petroleum has already largely taken the place of coal as fuel for the Royal Navy. It is easier to handle ; it occupies less space ; and it creates no smoke. It was specially in view of the Navy's requirements that Mr. Churchill, when First Lord of the Admiralty, acquired for the British Navy an interest in the Persian oilfields, and it was mainly to protect that source of supply that military operations were begun in the Persian Gulf at the very outbreak of the war. Whatever may be the political destiny of Mesopotamia after the war, we may assume that the British Navy will retain some power of control over the Persian oilfields and their outlet to the sea. Them are, unfortunately, no published figures showing how far these oilfields will go towards supplying the wants of the Navy. We may, however, assume that practically the whole commercial demand for petroleum will have to be supplied from outside the Empire, unless new sources of supply can be discovered and developed. Taking the United Kingdom alone, we find that our importations of petroleum rose from 254,000,000 gallons in 1901 to 488,000,000 in 1913. Of the latter total 466,000,000 gallons came from foreign countries and 22,000,000 from British Possessions.

These facts are quoted in order to emphasize the importance of the operations now in progress in the Midlands. If by any means we could discover in England an appreciable source of supply of petroleum, it would undoubtedly ease the economic difficulties which we might otherwise have to encounter if we were completely dependent on foreign countries. According to articles published in the Daily Chronicle and in the Westminster Gazette, the prospects of obtaining at any rate some supply from the Midlands are fairly hopeful. To quote. the Daily Chronicle :— in 1911 a boring at Kelham, in the .county of Nottingham, proved beyond doubt that true, normal petroleum in crude liquid

form existed in England, the boring having struck petroleum at a depth of 2,440 feet contained in a petroliferous band of coaret sandstone many feet in thickness accompanied by salt and hoe water in the contiguous strata, as usually occurs in other oilfields."

The article goes on to say that the analysis of this oil showed that it was very suitable for Naval requirements. The article further lays stress on the official delays which have occurred in the development, or rather in the investigation, of this possible source of supply. Even when the official delays had been overcome, and the Ministry of Munitions had decided to co-operate with Lord Cowdray in investigating this English petroleum field, a political difficulty supervened.

Another interesting point on the scientific side is brought out by the Westminster Gazette—namely, that for a long time petroleum was assumed to be a product of some natural distillation of coal. It was even called " coal oil" both in America and in this country. Further geological and chemical investigation has proved that petroleum was in no way connected with coal, and that it must be looked for not necessarily in coalfields but in certain sandstone formations. The oil discovered in mine-shafts appears to have been there owing to a mere accident of leakage from the natural bed of the petroleum into the coalfield. Curiously enough, as the Westminster Gazette explains, the false hypothesis that oil was due to the natural distillation of coal led to the develop- ment of the Scottish shale industry, for a young Scottish engineer, assuming this hypothesis to be correct, in the year 1845 or thereabouts, hit upon the notion that by distilling Scots shale he could obtain oil, and succeeded in doing so. The results have been most satisfactory, for, according to the Census of Production published in 1909, the output of petroleum from Scottish shale-oil works was 80,000,000 gallons, apart from valuable by-products. Meanwhile, how- ever, the- same false hypothesis had checked the investigation of possible oilfields in England by encouraging investigators to look in the wrong direction.

The political difficulty above referred to is one which ought not to have been permitted to obstruct, even temporarily, practical work. It arises from the conflict between the land-owning and the land-taxing groups in the House of Commons. The landowner, on the theory that he owns everything from the centre of the earth to the sky, claims a pro- prietary right in the oil found under his land ; the land-taxer, who wishes to destroy all private property in land, a fortiori wishes to deprive the landowner of an additional property which he never anticipated. In this case we cannot help thinking that justice lies on the side of the land-taxer. Indeed, it would be extremely difficult to decide to what landowner the oil really belonged, for, being fluid, it may easily run from under the land of A into a pit sunk through the land of B. The logical course seems to be to compensate the surface owner for any damage which is done to his land in sinking shafts or erecting buildings, and for the rest to assume that the oil itself is in the nature of treasure-trove, and, following the rule with regard to precious minerals, is consequently the property of the Crown.