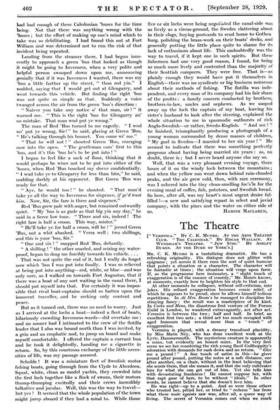 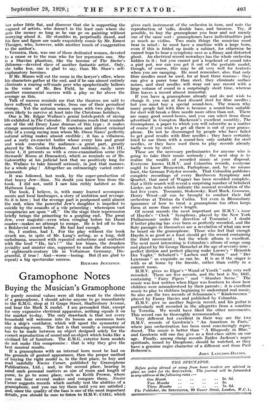 MR. C. K. MUNRO is a tantalizing dramatist. He has a refreshing originality. His dialogue does not glitter with epigrams ; yet across it there runs the sort of quiet humour that points a situation or a character. The character will be fantastic at times ; the situation will verge upon farce. If, as the programme here insinuates, a " slight touch of exaggeration is of the essence of comedy," Mr. Munrb knows, at moments, exactly how to heighten his style to that end.

At other moments he collapses, without self-criticism, into jokes. His refined exaggeration becomes comic relief, of which he appears to be proud, since he allows himself tedious repetitions. In At Mrs. Beam's he managed to discipline his straying fancy : the result was a masterpiece of its kind. In Cocks and Hens, the disastrous first venture of the Forum Guild in London, he wandered extravagantly, act after act. Veronica is between the two half and half. • In brief, an excellent first two acts ; a third act too much occupied with aged humours that reveal more than a " touch " of exaggeration.

Veronica is played, with a dreamy transfixed placidity, by Miss Marie Ney, who has done excellent work at the Lyric, Hammersmith. The mysterious creature is apparently a minx, but evidently an honest minx. In the very first scene we see her countering the rich young Basil Gullhoppity's adoration with demands for cash down and no return. Give me a pound ! " A fine touch of satire in this—he gives pound after pound, putting the notes at a safe distance, one after another, on a chair, without in the least believing that she wants them, that she means it, and that she only cultivates him for what she can get out of him. Yet she tells him with devastating frankness ! He cannot suppose her, with that rapt gaze of hers, to be without " ideals." - In other words, he cannot believe that she doesn't love him.

He was right—up to a point. And so were those others who trusted her, pitied her, or tried to redeem " her from what these male egoists saw was, after all, a• queer way of living. The secret of Veronica comes out when we reach

her sober little flat, and discover that she is supporting the vaguest Of artists, who doesn't in the least care where she gets the money so long as he can go on painting without worrying about it. He stumbles in, perpetually dazed, and his face and figure are made exquisitely comic by Mr. Ernest

• Thesiger, who, however, adds another touch ,of exaggeration to the author's.

Veronica, then, was one of those dedicated women, devoted to a cause or to the man who for her represents one. She is a Shavian phantom, like the heroine of The Doctor's Dilemma—devoted slave of another fantastic artist. Only,

she talks less, one is glad to say, than Mr. Shaw's self- explanatory heroines.

If Mr. Munro will cut the scene in the• lawyer's office, where his characters gather at the end, and if he can almost entirely eliminate a roaring self-made peer who apoplectically bellows in the voice of Mr. Ben Field, he may easily score another commercial success with a play so far above the average as this. Talk of success reminds me that the theatres are said to have suffered, in recent weeks, from one of their periodical slumps. Yet the autumn season opens with two plays that seem likely to survive at least into the Christmas holidays.

One is Mr. Edgar Wallace's. genial Notch-potch of racing life exhibited in The Calendar. It contains much that reminds

one of the old Drury Lane dramas of this type ; it makes strange assumptions about the careless and almost criminal folly of a young racing man whom Mr. Owen Nares' perfectly natural acting makes almost credible ; it has a villainess, and a surly ex-convict butler whose every hiss and grunt and wink convulse the audience—a great part, greatly played by Mr. Gordon Harker. And suddenly, in Act III., Scene I, it presents us with a cross-examination scene (the Stewards' Room at Doncaster), which so reminds us of Mr.

Galsworthy at his judicial best that we positively long for Mr. Wallace to take himself seriously, in just that manner, for a whole play ! Altogether an entrancingly varied enter- tainment.

• It was followed, last week, by the super-production of that heavy Jew—Siiss. No doubt you know him from the book. I did not, until I saw him richly habited as Mr. Matheson Lang.

The book, I believe, is, with many learned accompani- ments and local landscapes, a story of ambition and revenge. So it is here ; but the revenge part is postponed until almost the end, when the powerful Jew's daughter is impelled to suicide by the assaults of a vile princeling ' • whereupon vast conspiracies are spun " off." On the stage their repercussion briefly brings the princeling to a gurgling end. The great Jew, ever majestic—even when cringing before his Ducal master—makes no attempt to escape. He is led off to face a Bolshevist crowd below. He had had enough.

So, I confess, had I. For the play without the book struck me, in spite of Mr. Lang's acting, as a long, dull melodrama, seasoned with repeated seductions and scattered with the loud " Ha, ha's ! " the low hisses, the drunken joviality and sinister sins, supposed to mark the atmosphere of eighteenth-century life in Voliairean Germany. Dis- graceful, if true ! And—worse—boring. But (I am glad to repeat) a big spectacular success.