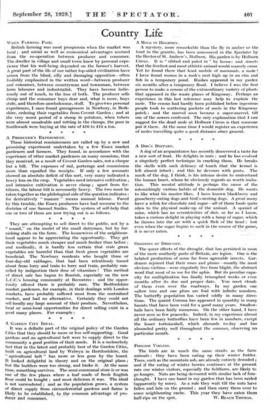 A dog of an acquaintance has recently discovered a taste for a new sort of food. He delights in nuts ; and he has evolved a singularly perfect technique in cracking them. He breaks the shells with such delicacy of touch that the kernel is left almost intact ; and this he devours with gusto. The mark of the dog, I think, is his intense desire to understand the human beast, whom he obviously regards as worth imita- tion. This mental attitude is perhaps the cause of the astonishingly various habits of the domestic dog. He wants to like what his master likes. I have known.blackberry and gooseberry-eating dogs and bird's-nesting dogs. A great many have a relish for chocolate and sugar—all of them foods quite alien to the physical make-up of the animal. A spaniel of mine, which has no eccentricities of diet, se) far as I know, takes a curious delight in playing with a lump of sugar, which he throws into the air with a quick flick of the head ; but even when the sugar begins to melt in the course of the-game, it is never eaten.