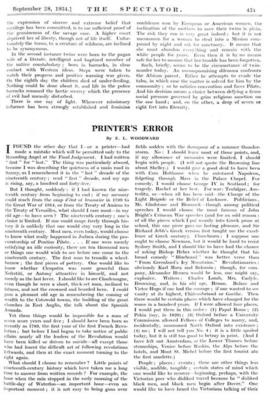 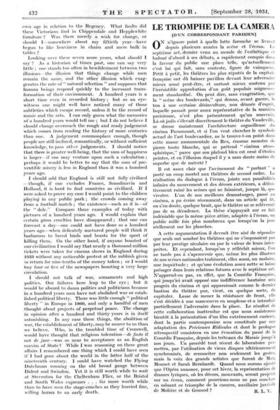 y FOUND the other day that I—or a printer—had I made a mistake which will be permitted only to the Recording-Angel at the Final Judgement. I had written "first ".for "last." The thing was particularly absurd, because I was describing the quietness of a main road in Surrey; as I remembered it in the " last " decade of the nineteenth century ; read " first " decade, and my age is rising, say, a hundred and forty-five.-- • - But I thought, suddenly ; if I had known the nine- teenth century frOM beginning to end ; if my memory could reach from the coup d'dat of brunurire•in 1799 to the Great War of 1914, or from the Treaty of Amiens to the Treaty of Versailles,' what shoukl I care most-in my old ate.---to have seen ? The nineteenth century ; one's choice is' limited.- If one could range freely through his- tory it is unlikely that one would stay very long in the nineteenth century. Most men, even today, would choose to know what really happened in Judaea during the pro- curatorship of Pontius Pilate. . . . If one were merely satisfying an idle curiosity, there are ten thousand men or things one would wish to see before one came to the nineteenth century. The first man to trundle a wheel- barrow ; the first pieces of pottery. One would like to know whether Cleopatra was more graceful than Nefertiti, or Antony attractive in himself, and not merely as the last lover. I should like to see Charlemagne, even though he were a short, thick-set man, inclined to fatness, and not the crowned and bearded hero. I could pass a pleasant old age in remembering the coming of wealth to the Cotswold towns, the building of the great churches in East Anglia, the talk about the Spanish Armada.

Yet these things would be impossible for a man of seven score years and five ; I should have been born as recently as 1789, the first year of the first French Revo- lution ; but before I had begun to take notice of public affairs nearly all the leaders of the Revolution would have been killed or driven to suicide—all except those who had learnt the difficult art of following revolutions leftwards, and then at the exact moment turning to the right again.

What should I choose to remember ? Little points of nineteenth-century history which have taken me a long time to answer from written records ? For example, the hour when the rain stopped in the early morning of the battle-day of Waterloo—an important hour—even an important moment ; it is not easy to bring guns over fields sodden with the downpour of a summer thunder- storm. No : I should leave most of-, those points, and, if my allowance of memories were limited, I should begin with people. (I will not quote the Browning line about Shelley.) I would give a good. ,deal to have been with Cam Hobhouse when he outstared Napoleon, fidgeting through Mass in the Palace Chapel. For comedy, I would choose George IV in Scotland ; for tragedy, Rachel at her best. For war: Trafalgar, Aus- terlitz, or—when all has been said—the Charge of the Light Brigade or the Relief of Lucknow. Politicians , Mr. Gladstone and Bismarck—though among political speeches I would choose the most famous of John Bright's Crimean War speeches (and for an odd reason ; of all the pieces which I put wearily into Greek prose at school, this one piece gave me lasting pleasure, and Sir Richard Jebb's Greek version first taught me the excel- lence of Greek oratory). Churchmen : I suppose one ought to choose Newman, but it would be hard to resist Sydney Smith, and I should like to have had the chance of asking Bishop Heber whether he thought that his broad comedy " Bluebeard " was better verse than " From Greenland's Icy Mountains." Revolutionaries : obviously Karl Marx and Bakunin ; though, for com- pany, Alexander Herzen would be less, one might say, explosive. Writers : Charles Lamb, Mrs. Carlyle, Browning, and, in his old age, Renan. Balzac and Victor Hugo if one had the courage ; if one wanted to see vanity at its highest, Chateaubriand or Goethe. Then there would be certain places which have changed for the worse in a hundred years. If I were allowed four places, I would put them in this order : (1) Papal Rome ; (2) Pekin (say, in 1820) ; (3) Oxford before a University Commission allowed Fellows of Colleges to marry, and, incidentally, summoned North Oxford into existence ; (4) no ; I will not tell you No. 4 ; it is a little spoiled today, but it is still too good to betray in print. (And I have left out Amsterdam, or the Lower Thames before steamships, Venice before Ruskin, the Alps before the hotels, and Mont St. Michel before the first tourist ate the first omelette.) People ; places ; events ; these are other things less visible, audible, tangible ; certain states of mind which one would like to recover—beginning, perhaps, with the Victorian peer who disliked travel because he " disliked black men, and black men begin after Dover." One would like to have heard the Victorians talking of their own age in relation, to the Regency. What faults did these Victorians find in Chippendale and Hepplewhite furniture ? Was there merely a wish for change, or should I—somewhere about my fiftieth year—have begun to like heaviness in chairs and mere bulk- in tables ?

Looking over these seven score years, what should I say ? As a historian of times past, one can say very little ; one stands too often in bewilderment between two illusions—the illusion that things change while men remain the same, and the other illusion which exag- gerates the rate of " natural selection " and supposes that human beings respond quickly to the incessant trans- formation of their environment. A hundred years is a short time even in recorded history ; but as an eye- witness one might well have noticed many of those subtleties which escape record, unless it be the record of music and the arts. I can only guess what the memories of a hundred years would tell me ; but I do not believe I should change overmuch the rough and ready judgement which comes from reading the history of more centuries than one. A judgement commonplace enough, though people are still inclined, romantically, or without sufficient knowledge, to pass other judgements. I should notice that there is greater well-being, that the sum of happiness is larger—if one may venture upon such a calculation ; perhaps it would be better to say that the sum of pre- ventible misery is less in England than it was a hundred years ago.

I should add that England is still not fully civilized —though, if one excludes France, Scandinavia and Holland, it is hard to find countries as civilized. If I were asked to prove my case I would point to the children playing in any public park ; the crowds coming away from a football match ; the existence—such as it is—of the " dole." Compare these examples of today with pictures of a hundred years ago. I would explain that certain gross cruelties have disappeared ; that one can forecast a day—one could not have done so a hundred years ago—when delicately nurtured people will think it barbarous to breed birds and beasts for the sport of killing them. On the other hand, if anyone boasted of our civilization I would say that nearly a thousand million tickets were taken for cinema shows in England during 1933 without any noticeable protest at the rubbish given in return for nine-tenths of the money taken ; or I would buy four or five of the newspapers boasting a very large circulation.

I should not talk of war, armaments and high politics. Our failures here leap to the eye ; but it would be absurd to damn politics and politicians because in a hundred years men have not abolished war or estab- lished political liberty. There was little enough " political liberty " in Europe in 1800, and only a handful of men thought about projects of perpetual peace. The change in opinion after a hundred and thirty years is in itself astonishing. In any case these things, the abolition of war, the establishment of liberty, may be nearer to us than we believe. Who, in the troubled time of Cromwell, would have thought that religious toleration—de facto if not de jure—was so. near to acceptance as an English maxim of State ? While I was reasoning on these great affairs I remembered one thing which I could have seen if I had gone about the world in the latter half of the nineteenth century. I could have watched the Flying Dutchman running on the old broad gauge between Dideot and Swindon. Yet it is still worth while to wait at Steventon for the Cheltenham Flier, or the Bristol and South Wales expresses . . fitr more - worth while . than to have seen the stage-coaches as they hurried fine, willing horses to an early death.