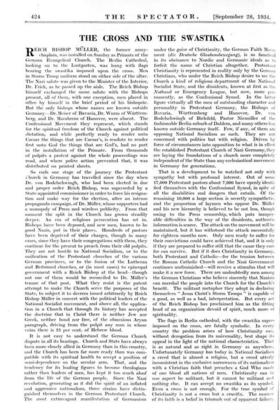 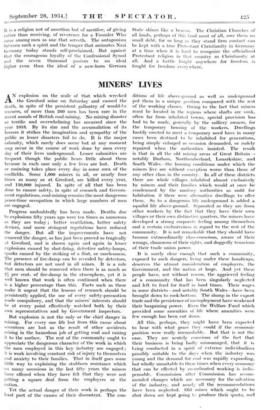 THE CROSS AND THE SWASTIKA

REICH BISHOP- MULLER, the former army chaplain, was installed on Sunday as Primate of the German Evangelical Church. The Berlin Cathedral, looking on to the Lustgarten, . was hung with flagi bearing the swastika imposed upon the cross. Men in Storm Troop uniform stood on either side of the altar. The Nazi salute was given to the Minister of the. Interior, Dr. Frick, as he passed up the aisle. The Reich Bishop himself exchanged the same salute with the Bishops present, all of them, with one exception, men placed in office by himself in the brief period of his bishopric. But the only bishops whose names are known outside Germany—Dr. Meiser of Bavaria, Dr. Wurm of Wurttem- berg, and Dr. Marahrens of Hanover, were absent. The Confessional Movement they • represent, which stands for the spiritual freedom of the Church against political dictation, and while perfectly ready to render unto Caesar the things that are Caesar's, is resolute to render first unto God the things that are God's, had no part in the installation of the Primate. From thousands of pulpits a protest against the whole proceedings was read, and where polite action prevented that, it was distributed on printed sheets.

So ends one stage of the journey the Protestant Church in Germany has travelled since the day when Dr. von Bodelschwingh, who had been elected in due and proper order Reich Bishop, was superseded by a State-appointed commissioner in order to force his resigna- tion and make way for the election, after an intense propaganda campaign, of Dr. Muller, whose supporters had a monopoly of Press and wireless publicity. From that moment the split in the Church has grown steadily deeper. An era of religious persecution has set in. Bishops have been deposed, and new men, known to be good Nazis, put in their places. Hundreds of pastors have been deprived of their charges, though in many cases, since they have their congregations with them, they continue for the present to preach from their old pulpits. They are not hostile to National Socialism, or to the unification of the Protestant churches of the various German provinces, or to the fusion of the Lutheran and Reformed churches, or (in most cases) to episcopal government with a Reich Bishop at the head—though not one of them would be reconciled to Dr. Milller's tenure of that post. What they resist is the patent attempt to make the Church serve the purposes of the State, to subject it to decrees issued arbitrarily by Reich Bishop Miiller in concert with the political leaders of the National Socialist movement, and above all, the applica- tion in a Church that through its history has accepted the doctrine that in Christ there is- neither Jew nor Greek, neither bond nor free, of the obnoxious Aryan paragraph, driving from the pulpit any man in whose veins there is 25 per cent. of Hebrew blood.

It is not easy to understand the German Church dispute in all its bearings. Church and State have always been more closely allied in Germany than in this country, and the Church has been far more ready than was com- patible with its spiritual health to accept a position of semi-dependence on the secular arm. That, and the tendency for its leading figures to become theologians rather than leaders of men, has kept it too much aloof from the life of the German people. Since the Nazi- revolution, generating as it did the spirit of an inflated and aggressive nationalism, three strains have distin- guished themselves in the German Protestant Church. The most extravagant manifestation of Germanism under the guise of Christianity, the German Faith Move- ment (die Deutsche Glaubensbewelung), is so fanatical in its obeisance to Nordic and Germanic ideals as to forfeit the name of Christian altogether. Protestant Christianity is represented in reality only by the German Christians, who under the Reich Bishop desire to see the Church a kind of religious department of the National Socialist State, and the dissidents, known at first as the Notbund or Emergency League, but now, more per- manently, as the Confessional Synod. In the latter figure virtually all the men of outstanding character and personality in Protestant Germany, the Bishops of Bavaria, Wurttemberg and Hanover, Dr. von Bodelschwingh of Bielefeld, Pastor Niemoller of the fashionable Berlin suburb of Dahlem, and many others less known outside Germany itself. Few, if any, of them are opposing National Socialism as such. They are not concerned with politics but with religion. Driven by force of circumstances into opposition to what is in effect the established Protestant Church of Nazi Germany, they are laying the foundations of a church more completely independent of the State than any ecclesiastical movement in Germany for generations.

That is a development to be watched not .only with sympathy but with profound interest. Out of some 17,000 Protestant pastors about 7,000 have openly identi- fied themselves with the Confessional Synod, in spite of all the disabilities and dangers that entails. Of the remaining 10,000 a large section is secretly sympathetic, and the proportion of laymen who oppose Dr. Muller and his new hierarchy is believed to be not less, though owing to the Press censorship, which puts insuper- able difficulties in the way of the dissidents, authentic information is scarce. The attack on the movement will be maintained, but it has withstood the attack successfully for eighteen months now. Only men ready to suffer for their convictions could have achieved that, and it is only if they are prepared to suffer still that the cause they care for can survive. But if it does Christianity in Germany, both Protestant and Catholic—for the tension between the Roman Catholic Church and the Nazi Government continues undiminished—will receive a stimulus that will make it a new force. There are undoubtedly men among the German Christians who believe sincerely that Nazism can marshal the people into the Church for the Church's benefit. The militant metaphor they adopt in declaring themselves " Jesus Christ's Storm Troops " is capable of a good, as well as a bad, interpretation. But every act of the Reich Bishop has proclaimed him as the fitting head of an organization devoid of spirit, much more of sj2irituality.

The flags in Berlin cathedral, with the swastika super- imposed on the cross, are fatally symbolic. In every country the problem arises of how Christianity can, without derogation from its universality, best shape its appeal in the light of the national characteristics. That is as natural and as right in Germany as anywhere.

Unfortunately Germany has today in National Socialism a creed that is almost a religion, but a creed utterly inconsistent in the exclusive narrowness of its nationalism with a Christian faith that preaches a God Who made of one blood all nations of men. Christianity can in one aspect be militant, but it cannot be militant and nothing else. It can accept no swastika as its symbol. Even a cross is not enough. For the true symbol of Christianity is not a cross but a crucifix. The essence of its faith is a belief in triumph out of apparent failure. It is a religion not of assertion but of sacrifice, of giving rather than receiving, of reverence for a Founder. Who came among men as one that serveth. The antagonism between such a spirit and the temper that animates Nazi Germany today stands self-proclaimed. But against that the courageous loyalty of the Confessional Synod and the • seven thousand pastors to an ideal higher even than the ideal of a new-born German State shines like a beacon. The Christian Churches of all lands, perhaps of this land most of all, owe them no small debt, for so long as they stand firm contact can be kept with a true Protestant Christianity in Germany at a time when it is hard to recognize the officialized Protestant religion in that country as Christianity at. all. And a battle fought anywhere for freedom is fought for freedom everywhere.