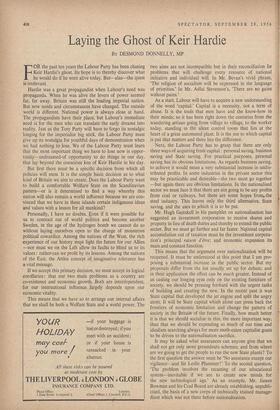 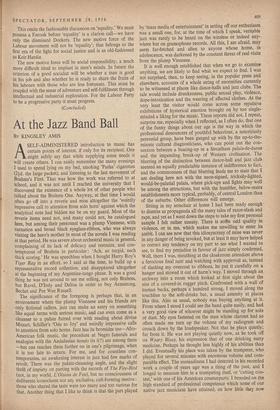 Laying the Ghost of Keir Hardie

BY DESMOND DONNELLY, MP FOR the past ten years the Labour Party has been chasing Keir Hardie's ghost. Its hope is to thereby discover what he would do if he were alive today. But—alas—the quest is irrelevant.

Hardie was a great propagandist when Labour's need was propaganda. When he was alive the levers of power seemed far, far away. Britain was still the leading imperial nation. But now needs and circumstances have changed. The outside world is different. National power is always close at hand. The propagandists have their place, but Labour's immediate need is for the men who 'can translate the early dreams into reality. Just as the Tory Party will have to forgo its nostalgic longing for the imperialist big stick, the Labour Party must give up its nostalgia for youthful days of demonstration when we had nothing to lose. We of the Labour Party must learn that the most important thing we have to lose now is oppor- tunity—undreamed-of opportunity to do things in our day, that lay 'beyond the conscious ken of Keir Hardie in his day.

But first there must be a specific decision from which all policies will stem. It is the simple basic decision as to what kind of Britain we aim to create. Does the Labour Party want to build a comfortable Welfare State on the Scandinavian pattern—or is it determined to find a way whereby this nation will also remain a world influence because we are con- vinced that we have in these islands certain indigenous ideas and values with a lesson for all mankind?

Personally, I have no doubts. Even if it were possible for us to contract out of world politics and become another Sweden, in the age of the hydrogen bomb we cannot do so without laying ourselves open to the charge of monstrous political cowardice. Among the nations of the West, the rich experience of our history must light the future for our Allies —nor must we on the Left allow its faults to blind us to its values : rather-can we profit by its lessons. Among the nations of the East, the Attlee concept of imaginative tolerance has a vital message.

If we accept this primary decision, we must accept its logical corollaries : that our two main problems as a country are co-existence and economic growth. Both are interdependent, for our international influence largely depends upon our economic vitality.

This means that we have so to arrange our internal affairs that we shall be both a Welfare State and a world power. The two aims are not incompatible but in their reconciliation lie problems that will challenge every resource of national initiative and individual will. In Mr. Bevan's vivid phrase, `The religion of socialism will be expressed in the language of priorities.' In Mr. Adlai Stevenson's, 'There are no gains without pains.'

As a start, Labour will have to acquire a new understanding of the word 'capital.' Capital is a necessity, not a term of abuse. It is the tools that men have and the know-how in their minds; so it has been right down the centuries from the wandering artisan going from village to village, to the worker today, standing in the silent control room that lies at the heart of a great automated plant. It is the use to which capital is put that matters and there lies the difference.

Next, the Labour Party has to grasp that there are only three ways of acquiring fresh capital : personal saving, business saving and State saving. For practical purposes, personal saving has its obvious limitations. As regards business saving, to achieve it would mean a very substantial increase in undis- tributed profits, In some industries in the private sector this may be practicable and desirable—the two must go together —but again there are obvious limitations. In the nationalised sector we must face it that there are not going to be any profits from coal or railways, but there are some hopes from, the steel industry. This leaves only the third alternative, State saving, and the uses to .which it is to be put.

Mr. Hugh Gaitskell in his pamphlet on nationalisation has suggested an investment corporation to receive shares and property in lieu of death duties and thereby to extend the public sector. But we must go farther and far faster. Naltional capital accumulation out of taxation must be the investment corpora- tion's principal raison d'etre; and economic expansion its main and constant function.

This means that the argument over nationalisation will be reopened. It must be understood at this point that I am pro- posing a substantial increase in the public sector. But my proposals differ from the list usually set up for debate; and in their application the effect can be much greater. Instead of us casting our longing eyes only on the existing furniture of society, we should be pressing for4/ard with the urgent tasks of building and creating the new. In the recent past it was State capital that developed the jet engine and split the angry atom. It will be State capital which alone can press back the frontiers of economic limitation and change the pattern of society in the Britain of the future. Finally, how much better it is that we should socialise in this, the more important way, than that we should be expending, so much of our time and idealism searching always for more moth-eaten capitalist goats to be driven to the nationalisation sacrifice.

It may be asked what assurances can anyone give that we shall not get only more groundnuts schemes; and from where are we going to get the people to run the new State plants? To the first question the answer must be 'No assurance except our vigilance—and Sir Leslie Plummer!' To the second question, `The problem involves the recasting of our educational system—inevitable if we are to create new minds, for the new technological age.' As an example, Mr. James Bowman and his Coal Board are already establishing, unpubli- cised, the basis of a new corps of technically trained manage- thent which was not there before nationalisation. This omits the fashionable discussion on 'equality.' We must possess a Farouk before 'equality' is a clarion call—we have only the dismissed Dockers. The new motive force of the Labour movement will not be `equality'; that belongs to the first era of the fight for social justice and is as old-fashioned as Keir Hardie.

The new motive force will be social responsibility; a much more difficult ideal to implant in men's minds. In future the criterion of a good socialist will be whether a man is good at his job and also whether he is ready to share the fruits of his labours with those who are less fortunate. This must be coupled with the sense of adventure and self-fulfilment through intellectual and industrial exploration. For the Labour Party to be a progressive party it must progress.