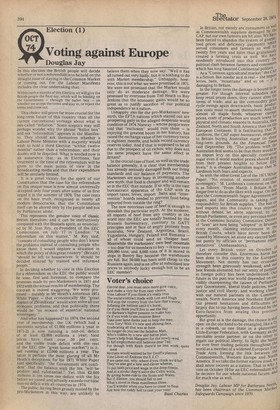 In this election the British people will decide whether or not a referendum is to be held on the straight issue of staying in the Common Market or coming out. For the Labour Manifesto includes the clear undertaking that:

Within twelve months of this Election we will give the British people the final say, which will be binding on the Government — through the ballot box — on whether we accept the terms and stay in, or reject the terms and come out.

This choice will prove far more crucial for the long-term future of this country than all the current conventional verbiage about what is mis-called "inflation." Some sceptics may still perhaps wonder why the phrase "ballot box" and not "referendum" appears in the Manifes to. They should ask themselves whether a Labour Prime Minister with a majority would wish to hold a third Election "within twelve months" rather than a referendum; and their doubts will be dispelled. What is needed now is an assurance that, as in Elections, fair treatment at the time of the referendum will be given to the main points of view in the broadcasting media and that their expenditure will be similarly limited.

It is a great victory for the spirit of our Constitution that the case for the referendum on this unique issue is now almost universally accepted only four years after some of us first urged it in the summer of 1970. The case rests on the basic truth, recognised in nearly all modern democracies, that the Constitution itself can be altered only by the people and not by Parliament alone.

This represents the genuine voice of classic British liberalism; and it can be instructively compared with the Brussels spirit, as enunciat

know them. I would deplore a situation in which the policy of this great country" (Britain) "should be left to housewives. It should be decided instead by trained and informed people.—

In deciding whether to vote in this Election for a rgerendum on the EEC the public would be wise, first and foremost, to compare the promises made by pro-Marketeers in 1971 and 1972 with the actual results of membership. The contrast is indeed staggering. We were pro mised — notably in Mr Heath's notorious 1971 White Paper — that economically the "great

market of 250 millions" would soon solve all our economic problems, and that politically there would be "no erosion of essential national sovereignty."

And what has happened? In 1974, the second year of membership the UK (which had a payments surplus of £1,000 millions a year in 1971-2) is now running a non-oil deficit of at least £2,000 millions a year; food prices have risen over 50 per cent; and the visible trade deficit with the rest of the EEC (the "great home market") is it self running at £2,000 millions a year. The latter is perhaps the most glaring of all Mr Heath's deceptions; for his 1971 White Paper said specifically: "the Government are confident" that the balance with the Six "will be • postive and substantial." Yet this £2,000 millions is ten times our deficit with the Six before we joined; and actually exceeds our total ' non-oil deficit with all countries in 1974. The public, having been grossly misled by the pro-Marketeers in this way, are unlikely to believe them when they now say: "Well it has all turned out very badly, but it is nothing to do with Market membership." Unhappily, however, this is not what we were promised in 1971. We were not promised that the Market would only do us moderate damage. We were promised by everyone from Ted Heath to Roy Jenkins that the economic gains would be so great as to justify sacrifice of our political independence as a nation.

Unhappily also for the pro-IV1arketeers' new myth, the EFTA nations which stayed out are prospering gaily in the alleged desperate world condition of 1974. Norway whose people were told that "exclusion" would ruin them — is enjoying the greatest boom in her history, has raised the exchange value of her currency twice in eighteen months, and holds record currency reserves today. And if that is supposed to be all due to the prospect of oil riches; why does not the same prospect have the same effect in Britain?

In the crucial case of food, as well as the trade balance generally, it is clear that membership has already seriously damaged both our living standards and our balance of payments. The Marketeers are now busy in inventing another new myth; that food is cheaper and will remain so in the EEC than outside. If so why is the vast bureaucratic apparatus of the CAP with its import taxes, levies, import bans and "intervention" hoards needed to prevent food being imported from outside the ring? The now notorious case of beef is enough to demolish this particular myth. At the moment, all imports of beef from any country in the world into the EEC are totally banned by the Brussels bureaucracy, contrary to GATT principles and in face of angry Protests from Australia, New Zealand, Argentina, Brazil, Yugoslavia, Hungary, Poland and Rumania — all of whom could send us cheaper beef. Meanwhile the marketeers' own beef mountain — too dear for us members to buy is now over 200,000 tons: and 8,000 tons of it is stored in ships in Bantry Bay because the warehouses are full. But 30,000 has been sold cheap to the Russians again, and is on offer at subsidised low prices to anybody lucky enough not to be an EEC member!

Elector dear, you must once more give voice, And make a very far from easy choice. Vote Labour! If you think it's really true The social contract made with Len and Hugh Will step the country from the fate that's worst, Inflating the balloon until it's burst; Or if you think you'll live to see the day On Barbara's higher pension to make hay; Or if you wish to see receiver Benn Take over lame ducks just to help the men, Vote Tory! With it's new and shining face, Eradicating all that was so base.

No longer do you see the Selsdon Man,

Who's hidden by a new and better plan.

There's help from Margaret for the newly-wed. In full employment still believes dear Ted; For though with Keith there'd be less work; quite soon Recruits would wanted be for Geoff's platoon.

If we came out, why, where d'you think we'd be? They've also got a new and clever wheeze, To put both price and wage in the deep-freeze. And at a stroke they'd solve.the Celtic wails, By giving home-rule to the Scots and Wales.

But if, Elector, you should fail to see What's novel in these manifestos three, You'll wonder when you have to cease to float Just how the ruddy hell to cast your vote!

In Britain, not merely are consumers as well as Commonwealth suppliers damaged by the CAP, but our own farmers are hit also. We have been forced to abandon the system of guaran' served consumers an ervedpccons s umd deficiency e r san and fa mrmpearys seon t v well eNii h ifrobr twenty five years and have thus gratuitous created a farming crisis as well. We have needlessly introduced into this country the political clash between farmers and consumers which has long haunted Continental politics„ As a "Common agricultural market" the CAY, is a fiction. But insofar as it is real — the imPor` levies, bans, "mountains" and so on — it Is damaging to Britain. In the longer term the damage is bound to be greater. For though internal subsidies rn5 keep retail prices down, they cannot alter til„e terms of trade; and as the commodity Pric: cycle swings again downwards, basic prockw tion costs must re-assert themselves. And fot almost all staple foods, whatever current prices, costs of production are much lower for physical and climatic reasons in Australia, Nelv Zealand, North and South America than on the European Continent. It is fascinating that Lardinois, the CAP super-bureaucrat, objecte to Britain buying Australian sugar On these long-term grounds. As the Financial Times said (September 19): "The problem with the Australian deal seems to be that there would bAe no import levy on this specially contracte' sugar even if world market prices should dro5 from their present heights to below EE.,‘-' levels." It is cheaper Australian sugar that Lardinois both fears and expects. So with the other Great Lie of the 1971 White, Paper: "No erosion of essential nationa: sovereignty." M. Lardinois's comment on Oat is as follows: "From March 1 Britain is Ii longer free to do as she likes with sugar. On tha.0 date the Commonwealth Sugar Agreement WI,. expire, and the Community is taking aye' responsibility for British supplies." The ban 1:11 beef imports into this country was imP°5,e, without debate, let alone approval, by British Parliament, or even any previous notice to the Commons Scrutiny Committee. Dozens of "laws" are now being "adopted" in Brussels every month, claiming enforcement in the British Courts, which have never been 4,15 cussed by Ministers, let alone any elected boa' but purely by officials or "permanent repre' sentatives" (Ambassadors). Let every British voter on October 10 therefore consider this. Enormous harm ha„s been done to this country by the Europea!:. Movement. Not merely has our econornl'.. strength been grievously weakened, and out best friends alienated; but our unity of purpose in foreign policy has been undermined. Our future in the post-war world depended on Or visibly championing. the causes of Parliamen; • tary Government, liberal trade policies, socia' justice and civil liberty; and working closelY with our natural partners in the Cominon' wealth, North America and Northern Europe' Our present hesitations and difficulties are largely due to our having been diverted by Euro-fanatics from seizing this prect°11' opportunity. But great as is the damage, the choice is still open: on the one hand to be entangled, like a 11,Y in a cobweb, as one State in a plutocratic Little-Europe Federation, with Germany as the inevitable senior partner; or on the . other t° regain our political liberty, to fight the battle for ever freer trading policies throughout the„ world as a member of a widened European Fre' Trade Area, forming the link between tb,lie Commonwealth, Western Europe and Nor'', America. If we take the former narrow road, W: shall never recover as a nation. That is witY.,1 vote on October 10 for an EEC referendum wl'A' be decisive for our whole national future. an for much else as well.

Douglas Jay, Labour MP for Battersea North, has been chairman of the Common Market Safeguards Campaign since 1970.