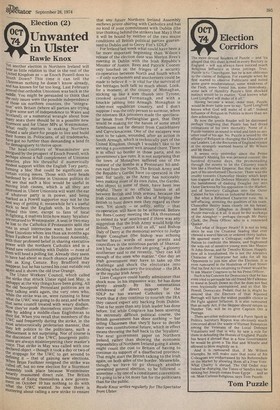 Liam Cosgrove could hardly administer that shock now. In his impassive way, he has done plenty already. By his ostentatious withdrawal of direct support for the SDLP he has warned Catholics in the North that if they continue to nourish the IRA they cannot expect any backing from Dublin. That is far more than any Irish leader has done before. Yet while Cosgrove has been steering his extremely difficult political course, the British government has done nothing — bar telling Ulstermen that they'll have to decide their own constitutional future; which in' effect means throwing the hall back to the loyalists'. The next government paper on Northern Ireland, rather than showing the, economic impossibility of Northern Ireland going it alone, might count the cost to Britain of having to continue its support of a disaffected province. That might start the British talking to the Irish again, on both sides of the border. Meanwhile, though, we have to go through another unwanted general election, to be followed — sometime — by one of a constituent convention. It's going to be a lot more fun for the politicians than for the public.

Rawle Knox writes regularly for The Spectator from Ulster.