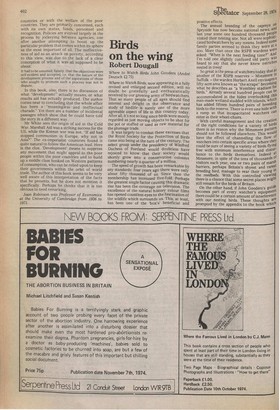 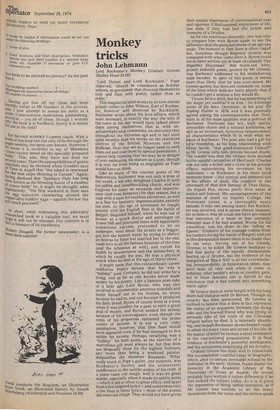 Birds on the wing

Where to Watch Birds, now appearing in a fully revised and enlarged second edition, will no doubt be gratefully and enthusistically reveived by our growing army of birdwatchers. That so many people of all ages should find interest and delight in the observance and study of birdlife is surely one of the more agreeable aspect of life in this country today. After all, it's not so long since birds were mostly regarded as just moving objects to be shot for the pot or stuffed or used as raw material for the plumage trade. It was largely to combat these excesses that the Royal Society for the Protection of Birds came into being at the turn of the century. The select group under the presidency of Winifred Duchess of Portland would doubtless have rejoiced to know that their society would shortly grow into a conservation colossus numbering nearly a quarter of a million..

The speed of growth has been remarkable by any standards: four years ago there were only about fifty thousand of us. Since then the membership has increased five-fold. Perhaps the greatest single factor causing this dramatic rise has been the coverage on television. The excellence of the natural history colour films has opened countless eyes to the fascination of the wildlife which surrounds us. This, at least, has been one of the 'box's' beneficial and The annual breeding of the ospreys und Speyside has now become national news, an last year some one hundred thousand peopl visited their nesting site. Not all were sophisticated birdwatchers by any means. Indeed some family parties seemed to think they were at a zoo. More than once the RSPB wardens were asked: "When is the next feeding time?" And I'm told one slightly confused old party was heard to say that she never knew ostriches nested in trees! So great is the press of watchers today that a. i another of the RSPB reserves — Minsmere Suffolk — the warden Herbert Axell envisages a fifty-acre area known as "the scrape" becoming what he describes as "a Wembley stadium fur birds." Already several hundred people can 13.e accommodated in the hides overlooking

man-made wetland studded with islands, wh■ch has added fifteen hundred pairs of breedirig birds to the reserve. There is even one hide With a ramp so that incapacitated watchers can enter in their wheel-chairs,

With careful management and the creation of the right conditions for a variety of birds there is no reason why the Minsmere pattern should not be followed elsewhere. This wouldf have the effect of channelling the flow 0 watchers into certain specific areas where they could be sure of seeing a variety of birds flying free with minimum interference and disturbance to the birds themselves. Indeed at, Minsmere, in spite of the tens of thousands 0' visitors each year, one or two pairs of marsh harriers, perhaps Britain's shyest and rares. t breeding bird, manage to rear their young JO the reedbeds. With this controlled viewing there is a chance that some secret places might still remain for the birds of Britain. On the other hand, if John Gooders's'guide, becomes part of every watcher's equipment there could be a certain amount of interference with our nesting birds. These thoughts are prompted by the appendix to the book whicil Solicits readers to send yet more revelatory information. Thus:

it would be helpful if information could be set out under the following headings: I. Name of area.

Are birds to be allowed no privacy? As the poet has it, RUr meddling intellect !!4.1sshapes the beauteous forms of things: We murder to dissect.

Having got that off my chest and been horribly unfair to Mr Gooders in the process, rriaY I now attempt to assess his merit as a guide. Conscientious, meticulous, painstaking, Practical — yes all of these, though I wonder Why the book is in hardback. Surely it is meant fOr use in the field?

, For his total accuracy I cannot couch. With a nook of this kind one can only riffle through the. Pages seeking the spots one knows. However I 0 know it is incorrect to say of Minsmere 'stone curlew breed on the specially prepared fields." This, also, they have not done for several years. Then the susceptibilities of gentle watchers may be shocked when Gooders says (r)f Tiree in Argyll that "the island is renowned the best snipe shooting in Europe." Again, k_aving disclosed that "Salisbury Plain has long ueen known as the breeding haunt of a number of scarce birds" he, it might be thought, adds ingenuously: "The first weekend in June sees the egg collectors clambering around the enPses after hobbys' eggs — against the law but still much practised."

_ In short, while welcoming this admirably searched book as a valuable tool, we must no

facpe will not be misused. Our concern is in t a measure of its excellence.