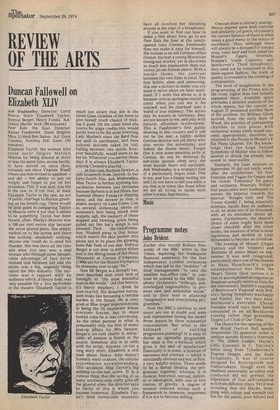 Ash Wednesday. Director: Larry Peerce. Stars: Elizabeth Taylor, Helmut Berger, Henry Fonda. 'AA' Odeon Marble Arch (99 minutes) Fear Eats the Soul. Director Rainer Fassbinder. Stars: Brigitte Mira, El Hedi Ben Salem. 'AA' Gate Cinema, Notting Hill Gate (93 minutes) Elizabeth Taylor, the woman who could never forgive Marilyn Monroe for being around at more or less the same time, seems hardly to have moved on since then, certainly not since Virginia Woolf where one was invited to applaud – and did – her ability to put on weight and forget to put on her eyelashes. This, it was said, was life in the raw, or, if not that, at least Elizabeth Taylor in the raw, an act of public marriage to Burton grunting on the hearth rug. There would be little point in comparing Taylor to Monroe were it not that it seems to be something Taylor has done herself, often. Marilyn Monroe was a 100 per cent movie star because she never played parts. She simply walked on to the screen and there was nothing, absolutely nothing, anyone else could do to steal her thunder. She was there all the time and what you saw was a real woman who through some inexplicable advantage of fate never realised that between her and the public was a big, ungainly thing called the film industry. The outcome was a rapport with an audience which, if theory held, was only possible for a live performer in the theatre. Elizabeth Taylor is much too aware that she is the Great Glam Goddess of the Aeon to give herself much chance of making it good. On the other hand she yearns for stage credits too, would surely love to be the most towering Lady Macbeth since the Bard first put quill to parchment, and here cultural atavism takes its toll. Falling between two stools, however beautifully, would seem to b.e her lot. Whenever you see her these days it is always Elizabeth Taylor playing Cleopatra playing ... in this case, Barbara Sawyer, a rich housewife from Detroit. In her forty-fourth film, Ash Wednesday, Miss Taylor is further stylising her oscillation between two fantasies because Barbara is in her fifties, her husband (Henry Fonda) is slipping away, and the answer to that is plastic surgery on Lake Como. Cue in several sickening shots of someone's face being sliced with scalpels, ugh, the memory of those snipped and bleeding jowls being pulled out like bat's wings is not pleasant. Then. . . the transformation. Washed away is that lotion which makes the skin pucker into pleats and in its place the glowing bona fide flesh of our star. Helmut Berger is not slow to notice either and in the dining room of the Hotel Miramonti at Cortina d'Ampezzo (1960s site for the Winter Olympics) he shimmies over to say "Hi." Now Mr Berger is a thought too, once described with cruel lack of foresight as "the most beautiful man in the world." (All this beauty, it's heavy weather). I think he over-reacted. His thwarted narcissism looks like becoming a terrible burden in the future. He is very good at Blue Angel impersonations or being the SS lieutenant whom everyone fancies, . but in more human roles he is less convincing. As the 'other partner in what is presumably only the first of many post-op affairs for Mrs Sawyer, Berger's ice-cold charm is intractable, all passion is frozen at the source. Somehow this is at odds with the script. Anyway, to cut a long story short, Elizabeth is still mad about Henry who doesn't honestly want to know, the cellular rejuvenation notwithstanding. This occasions Miss Taylor's big sobbing-on-the-bed scene. it is a curious thing that the acting of so many actresses only really gets off the ground when the director says be bitchy or this is where you become hysterical. Elizabeth Taylor's most memorable moments have all involved her threshing around at the edge of a blasphemy.

If you want to find out how to make a film about love, go to see Fear Eats the Soul at the newlyopened Gate Cinema. Fassbinder does not make it easy for himself. His woman is an old German office cleaner, his man a young Moroccan immigrant worker, yet in the event so much less implausible than our yawny jet-set friends above. With a similar theme, the contrast between the two films is total. The first brittle, alien and unmoving, this one a picture to make you cry since it never plays on false sentiment. If 1 write less about it, it is because critical apologias sound so corny when you can see it for yourself and be charmed into a world of true intimacy. The actors may be known in Germany, they are not known to me, and play with natural, effortless involvement. This is Fassbinder's first public showing in this country and it will not be the last; a highly skilled German director not yet thirty who also wrote the screenplay and indeed the theme music. Forget that it won some amazing prize at Cannes, do not be deterred by sub-titles (people often are), the most brutish heart will succumb. Ash Wednesday is .a woman's film of a particularly bogus kind. This is not, and has a happy ending too and I do not have to tell you what a joy that is in times like these when we are all trying to outdo each other's manic depressions.