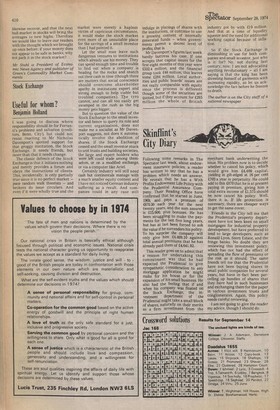 I was going to discuss where responsibility should lie for Ferranti's problems and salvation (creditors, Benn, City), but could not resist reacting to Mr Nicholas Davenport's spirited support for that groggy institution, the Stock Exchange. It needs friends, but more than that it needs change.

The classic defence of the Stock Exchange is that it initiates nothing and merely provides a forum and obeys the instructions of clients. This, incidentally, is only partially true since it is no perfect market — pace random walk theorists — and brokers do issue circulars. And even if it were wholly true and the

market were merely a hapless victim of capricious circumstance, it would make the stock market even more of an unsuitable place for the savings of a small investor than I had painted it.

Let the small man leave such dangerous ventures to institutions which already use his money. They can spend enough time and trouble to find out when a company is heading for the rocks and snatch out their cash in time (though there are mutters that social conscience should overcome shareholder apathy in institutions expert and strong enough to help viable but troubled companies). Ttie tyro cannot, and can all too easily get swamped in the rush as the big money gets bigger.

But to question the value of the Stock Exchange to the small investor and hence to query its role and current organisation, does not make me a socialist as Mr Davenport suggests, not does it automatically involve the abolition of shares. If the Stock Exchange ceased and the small investor stuck to unit trusts and building societies the large and expert holders who were left could trade among themselves, or on a modified exchange, or via a computer like Ariel.

Certainly industry will still need cash but continentals manage with a much smaller equity content and I have not noticed German industry suffering as a result. And companies could in any case still indulge in placings of shares with the institutions, or continue to use a growing content of internally generated funds — when governments permit a decent level of profits, that is. Mr Davenport's figures last week hardly buttress his case. If one accepts that capital issues for the first eight months of this year were £332.4 million, and the financial group took £48 million, this leaves some £284 million. Local authorities and public boards' issues are not really comparable with equity since the process is different though some of the securities are quoted, but if they account for £265 million the whole of British industry got by with £19 million. And that at a time of liquidity squeeze and the need for additional working capital because of inflation.

So if the Stock Exchange is diminishing in use for both companies and small investor, just who is it for? No, not during last century, now. I am not advocating anything revolutionary — all I am saying is that the king has been divesting himself of garments with increasing rapidity, so let us acknowledge the fact before he freezes to death.

The author is on the City staff of a national newspaper