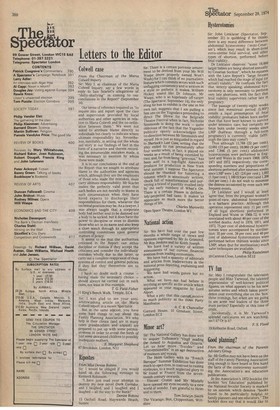 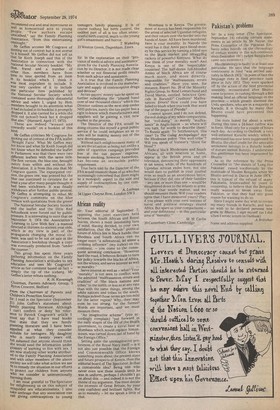 From the chairman of the Parents Advisory Group Sir: Mr Geffen may not have been on the staff of the Family Planning Association long enough to have heard at first hand the facts of the controversy surrounding the Association's sex education publications.

In the Association's 1472 book list the booklet 'Sex Education' published by the National Secular Society is marked by an asterisk which denotes "books found to be particularly helpful to family planners and sex educators." The booklet does say that it would like to recommend oral and anal intercourse as well as homosexual acts to young people. "Few authors escape unscathed," say the Family Planning Association, "from this entertaining onslaught." Mr Geffen accuses Mr Cosgrave of quoting out of context but is not averse to it himself. Mr Geffen did not tell us that Sir Keith Joseph said this of the Association in connection with the National Secular Society booklet. "My Hob. friend and a number of Other Hon, members have from time to time quoted from an item irl its booklist which I think it Was most imprudent to include. It was very careless of it to include one particular item published by the National Secular Society which contained some thoroughly distasteful advice and when I, urged by Hon. Members brought to its attention what it had included in its booklist it promptly dropped it. It also carried for a while the little red (school) book but it dropped that also," (Hansard, April 17, 1973). These are indeed "weasel and Cowardly words" on a booklet of this kind.

Mr Geffen criticises Mr Cosgrave for quoting out of context of the FPA leaflet 'Straight Facts'. What Mr Geffen may not know and what Sir Keith Joseph did not know when he defended the leaflet in Parliament was that there were two different leaflets with the same title. The first version, the blue one, brought Outcry from within and without the Association. It is from this one that Mr Cosgrave quotes. The expurgated version, the green one, was printed but the blue one continued to circulate for at least a year after many people thought it had been withdrawn. It was finally Withdrawn after further public protest. Mr Geffen is attempting to rebut Mr Cosgrave's comments on the blue version with quotations from the green! The National Secular Society booklet and the leaflet and the little Red Schoolbook were forced out by public Pressure. It is interesting to note that on September 9, 1974 the Association's Learning to Live With Sex', a manual directed at thirteen-to-sixteen year olds, Which in my view is part of the Propaganda changing the moral climate, was said to be not on sale in the Association's bookshop though a copy was eventually produced from "under the counter."

This group has spent three years gathering information on the Family Planning Association's attitudes to sex education and sees Mr Cosgrave's article as fair comment based on fact — simply the tip of the iceberg. Mr Geffen's letter rebuts nothing.

Sir: I read in the Spectator (September .21) John Geffen's statement about Family planning literature. Although I can't confirm or deny his reference to Patrick Cosgrave's article I must say that I have read books that state that they are family Planning literature and I have been appalled at what they consider suitable for teenagers. My daughter who is nearly twenty years old, felt ashamed that anyone should think she would need the information under glossary of learning to live with sex. I am now studying other works attributed to the Family Planning Association and with other members of the above society we will take what action we see fit to remedy the situation in our efforts to protect our children from anyone Who we consider is unintentionally harming them.

I am most grateful to The Spectator for enlightening us on this subject of misguided sex educationalists. I also take umbrage that any association can call giving contraceptives to young teenagers family planning. It is of course nothing but birth control, the saddest part of all is too often unsuccessful birth control, much to the young girl's amazement and horror.

T. Wakeling 23 Weston Green, Dagenham, Essex Sir: In the explanation on their "provision of medical advice and assistance" given for the Family Planning Association by its Director, it is not made clear whether or not financial profit results from such advice and assistance. Is it true that the Family Planning Association is involved in the manufacture and supply of contraceptive drugs and devices? As tax-payers money is,to be spent on further subsidising the "phased hand over of one thousand clinics" which the Director outlines as the next step under NHS policies, surely the tax-payer has a right to know which manufacturers and suppliers will be gaining a vast new market in the process. The Director of the FPA would be doing citizens like myself a great public service if he could enlighten us as to who will be making money out of the new developments. Without such enlightenment many of us see the situation as being not unlike a sales of cigarettes campaign provided free at the tax payers' expense, because smoking, however hazardous, has become an invincible public requirement. True facts told by the Director of the FPA would reassure those of us who feel increasingly concerned that there might be a monopoly aspect to the sale and supply of contraceptives by one commercial complex, A. Lothian 54 Upper Cheyne Row, London SW 3