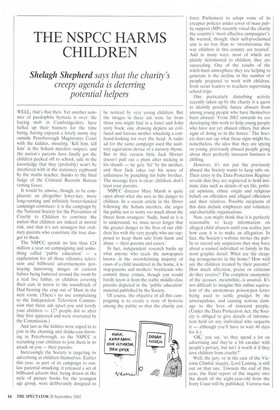 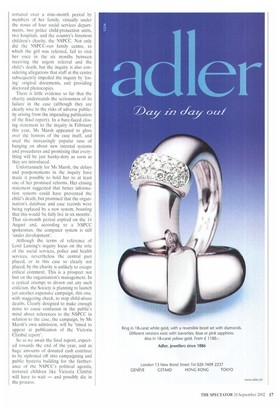 Shelagh Shepherd says that the charity's

WELL, that's that then. Yet another summer of paedophile hysteria is over: the baying mob in Cambridgeshire have furled up their banners for the time being, having enjoyed a lovely sunny day outside Peterborough Magistrates Court with the kiddies, shouting, 'Kill him, kill him' at the Soham murders suspect; and the nation's parents have finally got the children packed off to school, safe in the knowledge that they (probably) won't be interfered with in the stationery cupboard by the maths teacher, thanks to the final fudge of the Criminal Records Bureau vetting fiasco.

It would be unwise, though, to be complacent: an altogether lower-key, more long-running and infinitely better-funded campaign continues: it is the campaign by the National Society for the Prevention of Cruelty to Children to convince the nation that children are indeed at mortal risk, and that it's not strangers but ordinary parents who constitute the true danger to them.

The NSPCC spends no less than £24 million a year on campaigning and something called 'public education' — a euphemism for all those offensive television and billboard advertisements portraying harrowing images of cartoon babies being battered around the room by a real live father, or children covering their ears in terror to the soundtrack of Dad beating the crap out of Mum in the next room. (There's no use complaining to the Independent Television Commission that these ads upset you and terrify your children — 127 people did so after they first appeared and were overruled by the Commission.) And just as the kiddies were roped in to join in the chanting and drinks-can-throwing in Peterborough, so the NSPCC is recruiting your children to join them in its attack on you — their parents.

Increasingly the Society is targeting its advertising at children themselves. Earlier this year, as part of its campaign to outlaw parental smacking, it released a set of billboard adverts that, being drawn in the style of picture books for the youngest age group, were deliberately designed to be noticed by very young children. But the images in these ads were far from those you might find in a Janet and John story book: one drawing depicts an evilfaced and furious mother whacking a confused-looking tot over the head. A radio ad for the same campaign used the auditory equivalent device of a nursery rhyme. But in this version little Jack Horner doesn't pull out a plum after sticking in his thumb — he gets 'hit' by his mother, and then Jack takes out his sense of unfairness by punching his baby brother. The message here is clear: children, don't trust your parents.

NSPCC director Mary Marsh is quite open about what she sees as the danger to children. In a recent article in the Mirror following the Soham murders, she urges the public not to worry too much about the threat from strangers: 'Sadly, hard as it is to understand, we must never forget that the greater danger to the lives of our children lies with the very people who are supposed to keep them safe from harm and abuse — their parents and carers.'

In fact, independent research backs up what anyone who reads the newspapers knows: in the overwhelming majority of cases of a child murdered in the home, it is step-parents and mothers' boyfriends who commit these crimes, though you would hardly know it from the stable middle-class parents depicted in the 'public education' material published by the Society.

Of course, the objective of all this campaigning is to create a state of hysteria among the public so that the charity can force Parliament to adopt some of its creepier policies under cover of mass public support (MPs recently voted the charity the country's 'most effective campaigner'). Be warned, though: their self-proclaimed aim is no less than to 'revolutionise the way children in this country are treated'. And in many ways, most of which are plainly detrimental to children, they are succeeding. One of the results of the witch-hunt atmosphere they are helping to generate is the decline in the number of people prepared to work with children, from scout leaders to teachers supervising school trips.

One particularly disturbing activity recently taken up by the charity is a quest to identify possible future abusers from among young people who have themselves been abused: 'From 2002 onwards we are developing this work to help young people who have not yet abused others, but show signs of doing so in the future.' The Society does not say what these signs might be; nonetheless, the idea that they are spying on young, previously abused people going about their perfectly innocent business is However, it's not just the previously abused the Society wants to keep tabs on. Their entry in the Data Protection Register reveals that they are registered to hold intimate data such as details of sex life, political opinions, ethnic origin and religious beliefs on offenders and alleged offenders and their relatives. Possible recipients of this data include employers and voluntary and charitable organisations.

Now, you might think that it is perfectly reasonable to keep information on alleged child abusers until you realise just how easy it is to make an allegation. In fact, the Society's website invites the public to record any suspicions they may have about a named individual or family in the most graphic detail. What are the sleeping arrangements in the home? How well are the children treated by their parents? How much affection, praise or criticism do they receive? The complete anonymity of the accuser, meanwhile, is assured. Ifs not difficult to imagine this online equivalent of the anonymous poison-pen letter being used to settle grudges by the unscrupulous, and causing serious damage to the lives of innocent people. (Under the Data Protection Act, the Society is obliged to give details of information held on any individual who requests it — although you'll have to wait 40 days for it.) `OK,' you say, 'so they spend a lot on advertising and they're a bit cavalier with people's privacy, but isn't it worth it if they save children from cruelty?'

Well, the jury, or in the case of the Victoria Climbie inquiry, Lord Laming, is still out on that one. Towards the end of this year, the final report of the inquiry into the death of the eight-year-old from the Ivory Coast will be published. Victoria was tortured over a nine-month period by members of her family, virtually under the noses of four social services departments, two police child-protection units, two hospitals, and the country's foremost children's charity, the NSPCC. Not only did the NSPCC-run family centre, to which the girl was referred, fail to visit her once in the six months between receiving the urgent referral and the child's death, but the inquiry is also considering allegations that staff at the centre subsequently impeded the inquiry by 'losing' original documents, and providing doctored photocopies.

There is little evidence so far that the charity understands the seriousness of its failure in the case (although they are clearly wise to the risks of adverse publicity arising from the impending publication of the final report). In a bare-faced closing statement to the inquiry in February this year, Ms Marsh appeared to gloss over the horrors of the case itself, and used the increasingly popular ruse of banging on about new internal systems and procedures and promising that everything will be just hunky-dory as soon as they are introduced.

Unfortunately for Ms Marsh, the delays and postponements in the inquiry have made it possible to hold her to at least one of her promised reforms. Her closing statement suggested that better information systems could have prevented the child's death, but promised that the organisation's database and case records were being replaced by a new system, boasting that this would 'be fully live in six months'. That six-month period expired on the 14 August and, according to a NSPCC spokesman, the computer system is still 'under development'.

Although the terms of reference of Lord Laming's inquiry focus on the role of the social services, police and health services, nevertheless the central part played, or in this case so clearly not played, by the charity is unlikely to escape critical comment. This is a prospect not lost on the organisation's management. In a cynical attempt to drown out any such criticism. the Society is planning to launch yet another expensive campaign, this one, with staggering cheek, to stop child-abuse deaths. Clearly designed to make enough noise to cause confusion in the public's mind about references to the NSPCC in relation to the case, the campaign, by Ms Marsh's own admission, will be 'timed to appear at publication of the Victoria Climb ie report'.

So as we await the final report, expected towards the end of the year, and as huge amounts of donated cash continue to be siphoned off into campaigning and public hysteria building for the furtherance of the NSPCC's political agenda, tortured children like Victoria Climbie. will have to wait — and possibly die in the process.