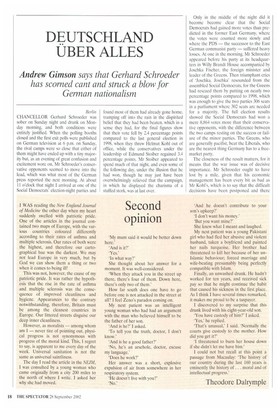 I WAS reading the New England Journal of Medicine the other day when my heart suddenly swelled with patriotic pride. One of the articles in the journal contained two maps of Europe, with the various countries coloured differently according to their rates of asthma and multiple sclerosis. Our rates of both were the highest, and therefore our cartographical hue was the darkest. We may not lead Europe in very much, but by God we can show them a thing or two when it comes to being ill!

This was not, however, the cause of my patriotic pride. It was rather the hypothesis that the rise in the rate of asthma and multiple sclerosis was the consequence of improved cleanliness and hygiene. Appearances to the contrary notwithstanding, therefore, Britain must be among the cleanest countries in Europe. Our littered streets disguise our deep inner cleanliness.

However, as moralists — among whom am I — never tire of pointing out, physical progress is not synonymous with progress of the moral kind. This, I regret to say, is apparent to me every day of the week. Universal sanitation is not the same as universal saintliness.

The day I read the article in the NEJM, I was consulted by a young woman who came originally from a city 200 miles to the north of where I write. I asked her why she had moved. 'My mum said it would be better down here.'

She thought about her answer for a moment. It was well-considered.

How far south does one have to go before one is not attacked in the street at all? I feel Zeno's paradox coming on.

My next patient was an intelligent young woman who had had an argument with the man who believed himself to be the father of her son.

'No, he's an arsehole, doctor, excuse my language.'

Her answer was a short, explosive expulsion of air from somewhere in her respiratory system.

'He doesn't live with you?'

`No.' 'And he doesn't contribute to your son's upkeep?'

'But you want mine?'

She knew what I meant and laughed.

My next patient was a young Pakistani girl who had fled her abusive and violent husband, taken a boyfriend and painted her nails turquoise. Her brother had threatened to kill her because of her unIslamic behaviour; forced marriage and wife-beating presumably being perfectly compatible with Islam.

Finally, an unwashed drunk. He hadn't worked for ten years, and received sick pay so that he might continue the habit that caused his sickness in the first place. As I think I have several times remarked, it makes me proud to be a taxpayer.

I discovered to my surprise that this drunk lived with his eight-year-old son. 'You have custody of him?' I asked. 'Yes,' he replied.

'That's unusual,' I said. 'Normally the courts give custody to the mother. How did you get it?'

'I threatened to burn her house down if she didn't let me have him.'

I could not but recall at this point a passage from Macaulay: 'The history of our country during the last 160 years is eminently the history of. . . moral and of intellectual progress.'