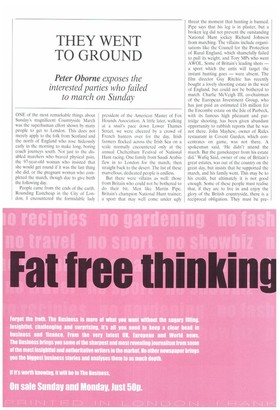 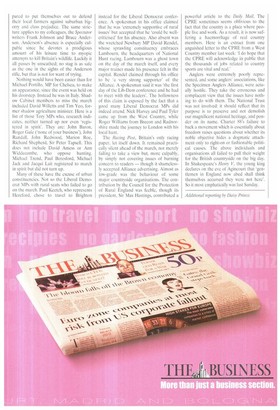 THEY WENT TO GROUND

ONE of the most remarkable things about Sunday's magnificent Countryside March was the superhuman effort shown by many people to get to London. This does not merely apply to the folk from Scotland and the north of England who rose hideously early in the morning to make long, boring coach journeys south. Not just to the disabled marchers who braved physical pain, the 97-year-old woman who insisted that she would get round if it was the last thing she did, or the pregnant woman who completed the march, though due to give birth the following day.

People came from the ends of the earth. Rounding Eastcheap in the City of London, I encountered the formidable lady president of the American Master of Fox Hounds Association. A little later, walking at a snail's pace down Lower Thames Street, we were cheered by a crowd of French hunters over for the day. Irish farmers flocked across the Irish Sea on a scale normally encountered only at the annual Cheltenham Festival of National Hunt racing. One family from Saudi Arabia flew in to London for the march, then straight back to the desert. The list of these marvellous, dedicated people is endless.

But there were villains as well: those from Britain who could not be bothered to do their bit. Men like Martin Pipe, Britain's champion National Hunt trainer; a sport that may well come under ugly threat the moment that hunting is banned. Pipe says that his leg is in plaster, but a broken leg did not prevent the outstanding National Hunt jockey Richard Johnson from marching. The villains include organisations like the Council for the Protection of Rural England, which shamefully failed to pull its weight, and Tory MPs who went AWOL. Some of Britain's leading shots — a sport which the antis will target the instant hunting goes — were absent. The film director Guy Ritchie has recently bought a lovely shooting estate in the west of England, but could not be bothered to march. Charlie McVeigh III, co-chairman of the European Investment Group, who has just paid an estimated £16 million for the Encombe estate on the Isle of Purbeck, with its famous high pheasant and partridge shooting, has been given abundant opportunity to rubbish reports that he was not there. John Mayhew, owner of Rules restaurant in Covent Garden, which concentrates on game, was not there, A spokesman said, He didn't attend the march. But the gamekeeper from his estate did.' Wafiq Said, owner of one of Britain's great estates, was out of the country on the great day, but insists that he supported the march, and his family went. This may be to his credit, but ultimately it is not good enough. Some of these people must realise that, if they are to live in and enjoy the glory of the British countryside, there is a reciprocal obligation. They must be pre pared to put themselves out to defend their local farmers against suburban bigotry and class prejudice. The same stricture applies to my colleagues, the Spectator writers Frank Johnson and Bruce Anderson. Anderson's absence is especially culpable since he devotes a prodigious amount of his leisure time to myopic attempts to kill Britain's wildlife. Luckily it all passes by unscathed; no stag is as safe as the one in the sights of the Anderson rifle, but that is not for want of trying.

Nothing would have been easier than for Michael Portillo, MP for Chelsea, to make an appearance, since the event was held on his doorstep. Instead he was in Italy. Shadow Cabinet members to miss the march included David Willetts and Tim Yeo, former shadow agriculture minister. Here is a list of those Tory MPs who, research indicates, neither turned up nor even 'registered in spirit'. They are: John Baron, Roger Gale ('none of your business'), John Randall, John Redwood, Marion Roe, Richard Shepherd, Sir Peter Tapsell. This does not include David Amess or Ann Wicidecombe, who oppose hunting. Michael Trend, Paul Beresford, Michael Jack and Jacqui Lait registered to march in spirit but did not turn up.

Many of these have the excuse of urban constituencies. Not so the Liberal Democrat MPs with rural seats who failed to go on the march. Paul Keetch, who represents Hereford, chose to travel to Brighton

instead for the Liberal Democrat conference. A spokesman in his office claimed that he was 'extremely supportive of rural issues' hut accepted that he 'could be wellcriticised' for his absence. Also absent was the wretched Newbury MP David Rendel, whose sprawling constituency embraces Lambourn, the headquarters of National Hunt racing. Lambourn was a ghost town on the day of the march itself, and every major trainer made his presence felt in the capital. Rendel claimed through his office to be 'a very strong supporter' of the Alliance. A spokesman said it was 'the first day of the Lib-Dem conference and he had to meet with the leaders'. The hollowness of this claim is exposed by the fact that a good many Liberal Democrat MPs did indeed attend. Nick Harvey and Paul Tyler came up from the West Country, while Roger Williams from Brecon and Radnorshire made the journey to London with his local hunt.

The Racing Post, Britain's only racing paper, let itself down. It remained practically silent ahead of the march, not merely failing to take a view but, more culpably, by simply not covering issues of burning concern to readers — though it shamelessly accepted Alliance advertising, Almost as low-grade was the behaviour of some major countryside organisations. The contribution by the Council for the Protection of Rural England was feeble, though its president, Sir Max Hastings, contributed a powerful article to the Daily Mail. The CPRE sometimes seems oblivious to the fact that the country is a place where people live and work, As a result, it is now suffering a haemorrhage of real country members. Here is an extract from one anguished letter to the CPRE from a West Country member last week: 'I do hope that the CPRE will acknowledge in public that the thousands of jobs related to country sports are vital and real.'

Anglers were extremely poorly represented, and some anglers' associations, like the Specimen Anglers Alliance, were actually hostile. They take the erroneous and complacent view that the issues have nothing to do with them. The National Trust was not involved: it should reflect that its purpose is to preserve and not demolish our magnificent national heritage, and ponder on its name. Charter 88's failure to back a movement which is essentially about freedom raises questions about whether its noble objective hides a dogmatic attachment only to right-on or fashionable political causes. The above individuals and organisations all failed to pull their weight for the British countryside on the big day. In Shakespeare's Henry V, the young king declares on the eve of Agincourt that 'gentlemen in England now abed shall think themselves accursed they were not here'. So it most emphatically was last Sunday.