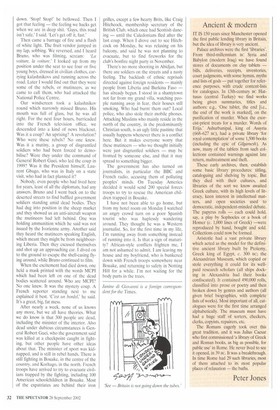 IT IS 150 years since Manchester opened the first public lending library in Britain, but the idea of library is very ancient.

Palace archives were the first 'libraries'. From third-millennium BC Syria and Babylon (modern Iraq) we have found stores of documents on clay tablets — bills, deliveries, receipts, inventories, court judgments, with some hymns, myths and lists of gods — put together for reference purposes, with crude content-lists for catalogues. In 13th-century BC Hattusas (central Turkey) we find works being given summaries, titles and authors: e.g., 'One tablet, the end [i.e., the end of the work is marked}, on the purification of murder. When the exorcist-priest treats for a murder. Words of Erija.' Ashurbanipal, king of Assyria (668-627 BC), had a private library 'for royal contemplation' of some 1,500 books (including the epic of Gilgamesh). As now, many of the tablets from such collections contained warnings against late return, maltreatment and theft.

These early archives, then, establish some basic library procedures: titling, cataloguing and shelving by topic. But they died with their cultures, and libraries of the sort we know awaited Greek culture, with its high levels of literacy, keen interest in intellectual matters, and open societies used to democratic, independent-minded debate. The papyrus rolls — each could hold, say, a play by Sophocles or a book of Homer (c. 1,000 lines of Greek) —were reproduced by hand, bought and sold. Collections could now be formed.

Aristotle had a vast private library which acted as the model for the definitive ancient library built by Ptolemy, Greek king of Egypt, c. 300 BC; the Alexandrian Museum, which copied or stole everything it could for its wellpaid research scholars (all ships docking in Alexandria had their books confiscated). It contained 490,000 rolls, classified into prose or poetry and then broken down by genres and authors (all given brief biographies, with complete lists of works). Most important of all, catalogues were for the first time arranged alphabetically. The museum must have had a huge staff of sorters, checkers, clerks, copyists, repairers, etc.

The Romans eagerly took over this great tradition, and it was Julius Caesar who first commissioned 'a library of Greek and Roman books, as big as possible, for public use' in Rome. He never lived to see it opened, in 39 BC. It was a breakthrough. In time Rome had 29 such libraries, most of them attached to its most popular places of relaxation — the baths.