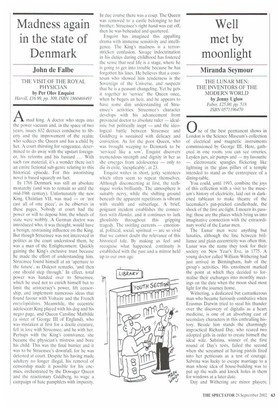 Madness again in the state of Denmark

THE VISIT OF THE ROYAL PHYSICIAN by Per Olov Enquist Harvill,E16.99, pp. 309. ISBN 1860469493 Amad king. A doctor who steps into the power vacuum and, in the space of two years. issues 632 decrees conducive to liberty and the improvement of the realm; who seduces the Queen and has a child by her. A court thirsting for vengeance, determined to do away with the upstart foreigner, his reforms and his bastard „ . With such raw material, it's a wonder there isn't an entire fictional sub-genre relating to this historical episode. For this astonishing novel is based squarely on fact.

In 1768 Denmark was still an absolute monarchy (and was to remain so until the mid-19th century). Unfortunately the new King, Christian VII, was mad — or not cast all of one piece', as he observes in these pages. Nobody at court had the power or will to depose him; the wheels of state were wobbly. A German doctor was introduced who, it was thought, would have a benign, restraining influence on the King. But though Struensee was not interested in politics as the court understood them, he was a man of the Enlightenment. Quickly gaining the King's exclusive trust because he made the effort of understanding him. Struensee found himself at an 'aperture to the future', as Diderot remarks, 'and then one should step through.' In effect, total power was handed over to Struensee, which he used not to enrich himself but to limit the aristocracy's power, lift censorship, and implement numerous ideas that found favour with Voltaire and the French encyclopedistes. Meanwhile, the eccentric adolescent King played with his dog and his negro page, and Queen Caroline Mathilde (a sister of George III of England), who was mistaken at first for a docile creature, fell in love with Struensee, and he with her. Perhaps with the King's connivance, she became the physician's mistress and bore his child. This was the final barrier and it was to be Struensee's downfall, for he was detested at court. Despite his having made adultery no longer illegal, his removal of censorship made it possible for his enemies, orchestrated by the Dowager Queen and the reactionary Guldberg, to wage a campaign of hate pamphlets with impunity. In due course there was a coup. The Queen was removed to a castle belonging to her brother; Struensee's right hand was cut off, then he was beheaded and quartered.

Enquist has imagined this appalling drama with immense sensitivity and intelligence. The King's madness is a terrorstricken confusion. Savage indoctrination in his duties during childhood has fostered the sense that real life is a stage, where he is going to get into trouble because he has forgotten his lines. He believes that a courtesan who showed him tenderness is the Sovereign of the Universe, and suspects that he is a peasant changeling. Yet he gets it together to 'service' the Queen once, when he begets an heir, and he appears to have some dim understanding of Struensee's activities. Struensee's character develops with his advancement from provincial doctor to absolute ruler — idealistic but politically inept — and the ideological battle between Struensee and Guldberg is sustained with delicacy and conviction. As for the poor Queen, who was brought weeping to Denmark to be 'serviced like a sow', Enquist discovers tremendous strength and dignity in her as she emerges from adolescence — only to die in exile, 'inexplicably', at 23.

Enquist writes in short, jerky sentences which often seem to repeat themselves. Although disconcerting at first, the technique works brilliantly. The atmosphere is suitably nervy, while the shifting ground beneath the apparent repetitions is vibrant with stealth and subterfuge. A brief, poignant incident establishes the connection with Hamlet, and it continues to lurk ghoulishly throughout this gripping tragedy. The swirling currents — emotional, political, social, spiritual — are so vivid that we cannot doubt the relevance of this historical tale. By making us feel and recognise what happened, continuity is established with the past and a mirror held up to our own age.