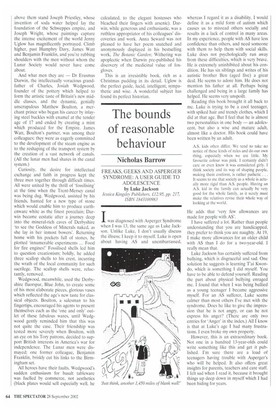 The bounds of reasonable behaviour

FREAKS, GEEKS AND ASPERGER SYNDROME: A USER GUIDE TO ADOLESCENCE by Luke Jackson

Iwas diagnosed with Asperger Syndrome when I was 13, the same age as Luke Jackson. Unlike Luke, I don't usually discuss the illness; I keep it to myself. Luke is open about having AS and unembarrassed,

whereas I regard it as a disability. I would define it as a mild form of autism which causes us to misread others socially and results in a lack of control in many areas. In my experience, people with AS have less confidence than others, and need someone with them to help them with social skills. Luke does not psychologically run away from these difficulties, which is very brave. He is extremely uninhibited about his condition. He has six siblings and writes of his autistic brother Ben (aged five) a great deal. He seems to adore him. He does not mention his father at all. Perhaps being challenged and being in a large family has helped. He seems very unspoilt.

Reading this book brought it all back to me. Luke is trying to be a cool teenager, with spiked hair and trendy clothes, which I did at that age. But [feel that he is almost two personalities in one body — an adolescent, but also a wise and mature adult, almost like a doctor. His book could have been written by an adult.

A.S. kids often differ. We tend to take no notice of these kinds of rules and do our own thing, especially when we are little. My favourite colour was pink. I certainly didn't care or even know it was considered girly. I think society and its way of shaping people, making them conform, is rather pathetic . . It seems to me that society as a whole is actually more rigid than A.S. people. Having an A.S. kid in the family can actually be very good for the whole family, as it surely must make the relatives revise their whole way of looking at the world.

He adds that 'very few allowances are made for people with AS'.

I have suffered a lot. Rather than people understanding that you are handicapped, they prefer to think you are naughty. At 19, I make more allowances for an older child with AS than I do for a two-year-old. I really mean that.

Luke Jackson has certainly suffered from bullying, which is disgraceful and sad. One solution he suggests is learning T'ai Kwondo, which is something I did myself. You have to be able to defend yourself. Reading the part about physical bullying enraged me. I found that when I was being bullied as a young teenager I became aggressive myself. For an AS sufferer, Luke seems calmer than most others I've met with the syndrome. Does he like to give the impression that he is not angry, or can he not express his anger? (There are only two entries for 'Anger' in the index.) All I know is that at Luke's age I had many frustrations. I even broke my own property.

However, this is an extraordinary book. Not one in a hundred 13-year-olds could write something like this and get it published. I'm sure there are a load of teenagers having trouble with Asperger's who will be helped. It also offers great insights for parents, teachers and care staff. I felt sad when I read it, because it brought things up deep down in myself which I had been hiding for years.