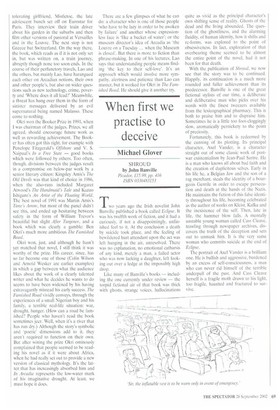 When first we practise to deceive

SHROUD by John Banville Picador, 115.99, pp. 416 ISBN 0330483153 Two years ago the Irish novelist John Banville published a hook called Eclipse. It was his twelfth work of fiction, and it had a curiously, if not a disappointingly, unfinished feel to it, At the conclusion a death by suicide took place, and the feeling of bewildered hurt attendant upon the act was left hanging in the air, unresolved. There was no explanation, no emotional catharsis of any kind, merely a man, a failed actor who was now lacking a daughter, left looking out over a ledge at the impossibly high drop.

Like many of Banville's books — including the one currently under review — the torpid fictional air of that book was thick with ghosts, strange voices, hallucinations quite as vivid as the principal character's own shifting sense of reality. Ghosts of the dead and the living abounded. The question of the ghostliness, and the alarming fluidity, of human identity, how it shifts and re-forms, was explored to the point of obsessiveness. In fact, exploration of that overbearing theme seemed to be almost the entire point of the novel, had it not been for that death.

With the publication of Shroud, we now see that the story was to be continued. Happily, its continuation is a much more rounded and fuller achievement than its predecessor. Banville is one of the great fictional stylists of our time, a deliberate and deliberative man who picks over his words with the finest tweezers available from the lexicographical pharmacy. This is both to praise him and to dispraise him. Sometimes he is a little too foot-cloggingly slow, aromatically pernickety to the point of preciosity.

Fortunately, this book is redeemed by the cunning of its plotting. Its principal character, Axel Vander, is a character straight out of some classic work of postwar existentialism by Jean-Paul Sartre. He is a man who knows all about bad faith and the creation of duplicitous selves. Early in his life he, a Belgian Jew and the son of a rag merchant, steals the identity of a bourgeois Gentile in order to escape persecution and death at the hands of the Nazis. He maintains the fiction of this false identity throughout his life, becoming celebrated as the author of works on Kleist, Kafka and the inexistence of the self. Then, late in life, the hammer blow falls. A mentally unstable young woman called Cass Cleave, trawling through newspaper archives, discovers the truth of the deception and sets Out to unmask him. It is the very same woman who commits suicide at the end of Eclipse.

The portrait of Axel Vander is a brilliant one. He is bullish and aggressive, burdened by an excess of self-consciousness, a man who can never rid himself of the terrible underpull of the past. And Cass Cleave herself is a fragile moth drawn to his light, too fragile, haunted and fractured to survive.