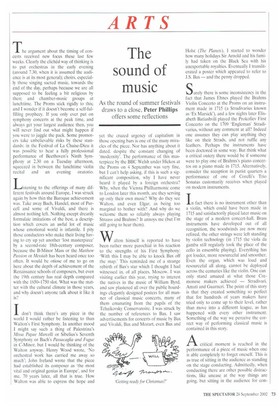 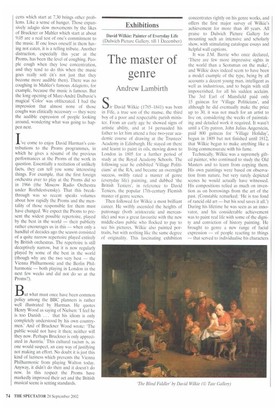 The sound of music

As the round of summer festivals draws to a close, Peter Phillips offers some reflections The argument about the timing of concerts received new focus these last few weeks. Clearly the cliched way of thinking is to put orchestras in the early evening (around 7.30, when it is assumed the audience is at its most general); choirs, especially those singing sacred music, towards the end of the day, perhaps because we are all supposed to be feeling a bit religious by then; and chamber-music groups at lunchtime. The Proms stick rigidly to this; and I wonder if it doesn't become a self-fulfilling prophecy. If you only ever put on symphony concerts at the peak time, and always get your largest audience then, you will never find out what might happen if you were to juggle the pack. Some promoters take unbelievable risks by these standards: in the Festival of La Chaise-Dieu it was possible to hear a fully professional performance of Beethoven's Ninth Symphony at 2.30 on a Tuesday afternoon, squeezed in between the lunchtime violin recital and an evening oratorio.

Listening to the offerings of many different festivals around Europe, I was struck again by how thin the Baroque achievement was. Take away Bach, Handel, most of Purcell and some of Vivaldi, and there is almost nothing left. Nothing except drearily formulaic imitations of the best, a description which covers an awful lot of music whose emotional world is infantile. I pity those conductors who make their living having to cry up yet another 'lost masterpiece' by a second-rate 18th-century composer, because the B-Minor Mass or the Matthew Passion or Messiah has been heard once too often. It would be otiose of me to go on here about the depth of achievement of the Renaissance schools of composers, but even the 19th century has real depth compared with the 1650-1750 slot. What was the matter with the cultural climate in those years, and why doesn't anyone talk about it like it is?

Idon't think there's any piece in the world I would rather be listening to than Walton's First Symphony. In another mood I might say such a thing of Palestrina's Missa Papae Marcelli or Sibelius's Seventh Symphony or Bach's Passacaglia and Fugue in C-Minor, but I would be thinking of the Walton anyway. Henry Wood wrote, No orchestral work has carried me away so much'; John Ireland wrote that the piece had established its composer as the most vital and original genius in Europe', and for me, 70 years later, all that is true. How Walton was able to express the hope and

yet the crazed urgency of capitalism in those opening bars is one of the many miracles of the piece. Nor has anything about it dated, despite the constant changing of 'modernity'. The performance of this masterpiece by the BBC Welsh under Hickox at the Proms on 4 September was very fine, but I can't help asking, if this is such a significant composition, why I have never heard it played by a foreign orchestra? Why, when the Vienna Philharmonic come to London later this month, are they serving up only their own music? Why do they see Walton, and even Elgar, as being too marginal to bother with? And why do we welcome them so reliably always playing Strauss and Brahms? It annoys me (but I'm still going to hear them).

Walton himself is reported to have been rather more parochial in his reaction to the strengths of his First Symphony: With this I may be able to knock Bax off the map.' This reminded me of a strange rebirth of Bax's star which I thought I had witnessed in, of all places, Moscow. I was visiting earlier this year, trying to interest the natives in the music of William Byrd, and saw plastered all over the public hoardings elegantly designed posters for all manner of classical music concerts, many of them emanating from the pupils of the Tchaikovsky Conservatoire. I was struck by the number of references to Bax. I saw advertisements for concerts of music by Bax and Vivaldi, Bax and Mozart, even Bax and

Hoist (The Planets). I started to wonder how many holidays Sir Arnold and his family had taken on the Black Sea with his unexportable royalties. Eventually I transliterated a poster which appeared to refer to J.S. Bax — and the penny dropped.

Surely there is some inconsistency in the fact that James Ehnes played the Brahms Violin Concerto at the Proms on an instrument made in 1715 (a Stradivarius known as 'Ex Marsick'), and a few nights later Elisabeth Batiashvili played the Prokofiev First Concerto on the 1709 'Engleman' Stradivarius, without any comment at all? Indeed one assumes they can play anything they like on their Strads, and not ruffle any feathers. Perhaps the instruments have been doctored in some way. But think what a critical outcry there would be if someone were to play one of Brahms's piano concertos on a piano made in 1715. Alternatively, consider the reception in purist quarters a performance of one of Corelli's Trio Sonatas customarily receives when played on modern instruments.

In fact there is no instrument other than a violin, which could have been made in 1715 and satisfactorily played later music on the stage of a modern concert-hall. Brass instruments have developed out of all recognition, the woodwinds are now more refined, the other strings were left standing by violin technology (in 1715 the viola da gamba still regularly took the place of the cello in ensemble playing). Everything has got louder, more resourceful and smoother. Even the organ, which was loud and resourceful all along, cannot be deployed across the centuries like the violin. One can only stand amazed at what those Cremonese makers achieved — Stradivari, Arnati and Guarneri. The point of this story is that they created something so perfect that for hundreds of years makers have tried only to come up to their level, rather than move into a different league, as has happened with every other instrument. Something of the way we perceive the correct way of performing classical music is contained in this story.

Acritical moment is reached in the performance of a piece of music when one is able completely to forget oneself. This is as true of sitting in the audience as standing on the stage conducting. Admittedly, when conducting there are other possible distractions, like unease at the way things are going, but sitting in the audience for con certs which start at 7.30 brings other problems. Like a sense of hunger. Those expansively adagio slow movements by the likes of Bruckner or Mahler which start at about 9.05 are a real test of one's commitment to the music. If one loses oneself in them having not eaten, it is a telling tribute. Another distraction, especially this year at the Proms, has been the level of coughing. People cough when they lose concentration, and they tend to do this when the music goes really soft (it's not just that they become more audible then). There was no coughing in Mahler's famous Adagietto, for example, because the music is famous. But the long opening of Marc-Andre Dalbavie's magical 'Color' was obliterated. I had the impression that almost none of those coughs was clinically necessary — they were the audible expression of people looking around, wondering what was going to happen next.

I've come to enjoy David Harman's contributions to the Proms programmes, in which he gives a résumé of the previous performances at the Proms of the work in question. Essentially a recitation of unlikely facts, they can tell you some interesting things. For example, that the first foreign orchestra ever to play at the Proms did so in 1966 (the Moscow Radio Orchestra under Rozhdestvensky). That this breakthrough was so recent speaks volumes about how rapidly the Proms and the mentality of those responsible for them must have changed. We expect the Proms to present the widest possible repertoire, played by the best in the world — their publicity rather encourages us in this — when only a handful of decades ago the season consisted of a quite narrow repertoire played entirely by British orchestras. The repertoire is still deceptively narrow, but it is now regularly played by some of the best in the world (though why are the two very best — the Vienna Philharmonic and the Berlin Philharmonic — both playing in London in the next few weeks and did not do so at the Proms?).

But what must once have been common policy among the BBC planners is rather well illustrated by Harman. He quotes Henry Wood as saying of Nielsen: 'I feel he is too Danish . . . that his idiom is only completely understood by his own countrymen.' And of Bruckner Wood wrote: The public would not have it then; neither will they now. Perhaps Bruckner is only appreciated in Austria.' This cultural racism is, as one would suspect, an easy way of justifying not making an effort. No doubt it is just this kind of laziness which prevents the Vienna Philharmonic from playing Walton today. Anyway, it didn't do then and it doesn't do now. In this respect the Proms have markedly improved their act and the British musical scene is setting standards.