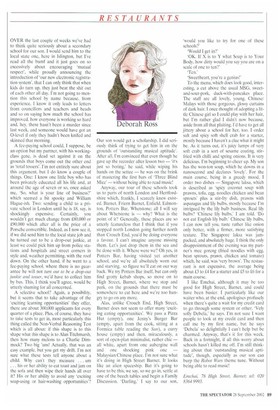 OVER the last couple of weeks we've had to think

quite seriously about a secondary school for our son. I would send him to the local state one, here in Islington, but I've read all the bumf and it just goes on so excessively about encouraging 'mutual respect', while proudly announcing the introduction of 'our new electronic registration system', that I can only think that when kids do turn up, they just beat the shit out of each other all day. I'm not going to mention this school by name because, from experience. I know it only leads to letters from councillors and teachers and heads and so on saying how much the school has improved, how everyone is working so hard and, hey, there hasn't been a murder since last week, and someone would have got an 0-level if only they hadn't been knifed and skinned that morning.

A fee-paying school could, I suppose, be an option but my partner, with his workingclass gene, is dead set against it on the grounds that boys come out the other end as 'total tossers'. I'm not entirety sure about this argument. but I do know a couple of things. One: I know one little boy who has been privately educated all his life and, at around the age of seven or so, once asked me, 'So, what is your line of business?' which seemed a bit spooky and William Hague-ish. Two: sending a child to a private school in London until he is 18, say, is shockingly expensive. Certainly, you wouldn't get much change from £80,000 or £90,000 which after all is the price of a Porsche convertible. Indeed, as I now see it, if we did send him to the local state job and he turned out to be a drop-out junkie, at least we could pick him up from police stations and hospitals and street corners in style and, weather permitting, with the roof down. On the other hand, if he went to a fee-paying school, where there is no guarantee he will not turn out to be a drop-out junkie and tosser, we'd have to collect him by bus. This, I think you'll agree, would be utterly shaming for all concerned.

A selective school? Again, a possibility, but it seems that to take advantage of the 'exciting learning opportunities' they offer, there are about 300,000 applicants for every quarter of a place. Plus, of course, they have to take tests to get in, most particularly this thing called the Non-Verbal Reasoning Test which is all about: if this shape is to this shape what this shape is to Alan Titchmarsh, then how many melons to a Charlie Dimmock? Two big 'uns! Actually, that was an easy example, but you get my drift. I'm not sure what these tests tell anyone about a child. Why can't they measure .. . um ... his or her ability to eat toast and jam on the sofa and then wipe their hands all over it? His or her ability to avoid any 'exciting soap-using or hair-washing opportunities'?

Our son would get a scholarship. I did seriously think of trying to get him in on the grounds of 'outstanding musical aptitude'. After all, I'm convinced that even though he gave up the recorder after lesson two — 'it's just so boring,' he said, while wiping his hands on the settee — he was on the brink of mastering the first bars of 'Three Blind Mice' — without being able to read music!

Anyway, our tour of these schools took us to parts of north London and Hertfordshire which, frankly. I scarcely knew existed. Barnet. Friern Barnet, Enfield, Edmonton, Potters Bar, Whetstone; all I will say about Whetstone is — why? What is the point of it? Generally, these places are so utterly featureless that I think that if you stopped north London going further north than Crouch End, you'd be doing everyone a favour. I can't imagine anyone missing them. Let's just drop them in the sea and be done with it, Where were we? Oh yes, in Potters Bar, having visited yet another school, and we're all absolutely worn out and starving, so figure we'll eat on our way back. We try Potters Bar itself, but can only find grotty kebab shops, so move on to High Street, Barnet, where we stop and park, on the grounds that there must be somewhere to eat here and we're too hungry to go on any more.

Alas, unlike Crouch End, High Street, Barnet does not seem to offer many 'exciting eating opportunities'. We pass a Pizza Hut (empty), one Jenny's Burger Bar (empty, apart from the cook, sitting at a Formica table reading the Sun), a curry house (empty) and then, miraculously, a sort of open-plan minimalist, rather chic — all white, apart from one aubergine wall and one shocking pink one — Malaysian/Chinese place. I'm not sure what it's doing in High Street Barnet. It looks like an alien spaceship. But it's going to have to he this, we say, so we go in, settle at one of the beech tables and begin a Family Discussion. 'Darling,' I say to our son, 'would you like to try for one of these schools?'

'OK. If X is to Y what Soap is to Your Body, how dirty would you say you are on a scale of one to ten?'

'Sweetheart, you're a genius!'

To the menu, which does look good, interesting, a cut above the usual MSG, sweetand-sour-pork, duck-with-pancakes place. The staff are all lovely, young, Chinese/ Malays with those gorgeous, glossy curtains of dark hair. I once thought of adopting a little Chinese girl so I could play with her hair, but I'm rather glad I didn't now because, aside from all that plaiting, I'd have to get all jittery about a school for her, too. I order salt and spicy soft shell crab for a starter, mostly because I haven't a clue what it might be. As it turns out, it's juicy lumps of very soft crab in a sort of sesame coating, stirfried with chilli and spring onions. It is very delicious. I'm beginning to cheer up. My son has the won-ton soup, which he downs in a nanosecond and declares 'lovely'. For the main course, being in a greedy mood, I order two dishes — Singapore taksa, which is described as 'spicy coconut soup with prawns, tofu, egg. noodles chicken and bean sprouts' plus a stir-fry dish, prawns with asparagus and lily bulbs, mostly because I'm intrigued by the lily bulb business. Real lily bulbs? 'Chinese lily bulbs,' I am told. `Do not eat English lily bulb.' Chinese lily bulbs, I can now tell you, taste rather like onion only better, with a firmer, more satisfying texture. The Singapore laksa was jampacked, and absolutely huge. I think the only disappointment of the evening was my partner's mee goreng (fried noodles with egg, bean sprouts, prawn, chicken and tomato) which, he said, was 'very brown'. The restaurant is not expensive, the average being about £3 to £4 for a starter and £5 to £6 for a main course.

I like Emchai, although it may be too good for High Street, Barnet, and could have been busier. I particularly like our waiter who, at the end, apologises profusely when there's quite a wait for my credit card to go through some system or other. 'Vely solly Debeta,' he says. I'm not sure I want people to look at my credit card and then call me by my first name, but he says Debela' so delightfully I can't help but be charmed. Anyway, that's it for this week. Back in a fortnight, if all this worry about schools hasn't killed me off. I'm still thinking about that 'outstanding musical aptitude', though, especially as our son can burp the Robot Wars theme tune. Without being able to read music!