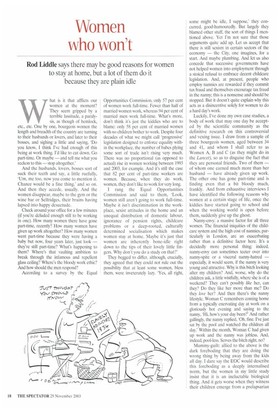 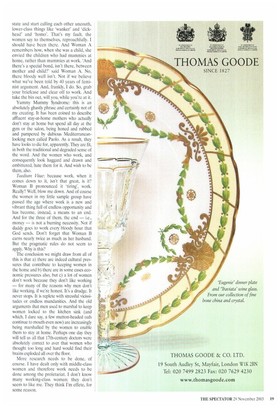 Rod Liddle says there may be good reasons for women to stay at home, but a lot of them do it because they are plain idle Ivhat is it that afflicts our women at the moment? They seem gripped by a terrible lassitude, a paralysis, as though of hemlock, etc., etc. One by one, bourgeois women the length and breadth of the country are turning to their husbands or lovers, and later to their bosses, and sighing a little and saying, 'Do you know, I think I've had enough of this being at work thing. I'd like to cut down. Go part-time. Or maybe — and tell me what you reckon to this — stop altogether.'

And the husbands, lovers, bosses sort of suck their teeth and say, a little ruefully, 'Um, me too, now you come to mention it. Chance would be a fine thing,' and so on. And then they accede, usually. And the women disappear, maybe to the gym or the wine bar or Selfridges, their brains having lapsed into happy desuetude.

Check around your office for a few minutes (if you're deluded enough still to be working in one). How many women there have gone part-time, recently? How many women have given up work altogether? How many women went part-time because they were having a baby but now, four years later, just look — they're still part-time? What's happening to them? Where's that vaulting ambition to break through the infamous and repellent glass ceiling? Where's the bloody work ethic? And how should the men respond?

According to a survey by the Equal Opportunities Commission, only 57 per cent of women work full-time. Fewer than half of married women work, whereas 94 per cent of married men work full-time. What's more, don't think it's just the kiddies who are to blame: only 58 per cent of married women with no children bother to work. Despite four decades of what we might call 'progressive' legislation designed to enforce equality within the workplace, the number of babes plying some sort of trade isn't rising very much. There was no proportional (as opposed to actual) rise in women working between 1993 and 2003, for example. And it's still the case that 82 per cent of part-time workers are women. Because, when they do work, women, they don't like to work for very long.

I rang the Equal Opportunities Commission and said to them, 'Look, women still aren't going to work full-time. Maybe it isn't discrimination in the workplace, sexist attitudes in the home and an unequal distribution of domestic labour, ignorance of pension rights, childcare problems or a deep-rooted, culturally determined socialisation which makes women stay at home. Maybe it's just that women are inherently bone-idle right down to the tips of their lovely little fingers. Why don't you do a study on that?'

They begged to differ, although, crucially, they agreed that they could not rule out the possibility that at least some women, bless them, were inveterately lazy. 'Yes, all right, some might be idle, I suppose,' they concurred, good-humouredly. But largely they blamed other stuff, the sort of things I mentioned above. Yet I'm not sure that those arguments quite add up. Let us accept that there is still sexism in certain sectors of the economy — the City, one imagines, for a start. And maybe plumbing. And let us also concede that successive governments have not helped women into employment through a stoical refusal to embrace decent childcare legislation. And, at present, people who employ nannies are rewarded if they commit tax fraud and themselves encourage tax fraud in the nanny; this is a nonsense and should be stopped. But it doesn't quite explain why this acts as a disincentive solely for women to do a hard day's work.

Luckily, I've done my own case studies, a body of work that may one day be accepted by the scientific community as the definitive research on this controversial and vexing issue. 1 draw from a sample of three bourgeois women, aged between 34 and 41, and whom I shall refer to as Women A, B and C (as they might do in the Lancet), so as to disguise the fact that they are personal friends. Two of them — of whom one earned much more than her husband — have already given up work. The other one has gone part-time and is finding even that a bit bloody much, frankly. And from exhaustive interviews I have identified the following reasons why women at a certain stage of life, once the kiddies have started going to school and when the working world is open before them, suddenly give up the ghost.

Nanny-envy: a massive factor for all three women. The financial iniquities of the childcare system and the high cost of nannies, particularly in London, are an exacerbating rather than a definitive factor here. It's a decidedly more personal thing; indeed, nanny-envy can sometimes teeter over into nanny-spite or a visceral nanny-hatred — especially, it would seem, if the nanny is very young and attractive. Why is this bitch looking after my children? And, worse, why do the children ask, a little wistfully, where she is of a weekend? They can't possibly like her, can they? Do they like her more than me? Do they love her? And then there's the nanny lifestyle. Woman C remembers coming home from a typically enervating day at work on a gloriously hot evening and saying to the nanny, 'Hi, how's your day been?' And rather gallingly, the nanny replied, 'Oh, fine. I've just sat by the pool and watched the children all day.' Within the month, Woman C had given up work and the nanny was jobless. And, indeed, pool-less. Serves the bitch right, no?

Mummy-guilt: allied to the above is the dark foreboding that they are doing the wrong thing by being away from the kids all day. I dare say the EOC would describe this foreboding as a deeply internalised norm, but the women in my little study insist that it is an ineluctable biological thing. And it gets worse when they witness their children emerge from a prelapsarian

state and start calling each other uncouth, lower-class things like `wankee and 'dickhead' and 'homo'. That's my fault, the women say to themselves, reproachfully. I should have been there. And Woman A remembers how, when she was a child, she envied the children who had mummies at home, rather than mummies at work. 'And there's a special bond, isn't there, between mother and child?' said Woman A. No, there bloody well isn't. Not if we believe what we've been told by 40 years of feminist argument. And, frankly, I do. So, grab your briefcase and clear off to work. And take the bin out, will you, while you're at it.

Yummy Mummy Syndrome: this is an absolutely ghastly phrase and certainly not of my creating. It has been coined to describe affluent stay-at-home mothers who actually don't stay at home but spend all day at the gym or the salon, being honed and rubbed and pampered by dubious Mediterraneanlooking men called Paolo. As a result, they have looks to die for, apparently. They are fit, in both the traditional and degraded sense of the word. And the women who work, and consequently look haggard and drawn and embittered, hate them for it. And wish to be them, also.

Taedium Vitae: because work, when it comes down to it, isn't that great, is it? Woman B pronounced it 'tiring', work. Really? Well, blow me down. And of course the women in my little sample group have passed the age where work is a new and vibrant thing full of endless opportunity and has become, instead, a means to an end. And for the three of them, the end — i.e., money — is not a burning necessity. Not if daddy goes to work every bloody hour that God sends. Don't forget that Woman B earns nearly twice as much as her husband. But the pragmatic rules do not seem to apply. Why is this?

The conclusion we might draw from all of this is that a) there are indeed cultural pressures that contribute to keeping women in the home and b) there are in some cases economic pressures also, but c) a lot of women don't work because they don't like working — for many of the reasons why men don't like working, if we're honest. It's a drudge. It never stops. It is replete with stressful vicissitudes or endless mundanities. And the old arguments that men used to marshal to keep women locked to the kitchen sink (and which, I dare say, a few mutton-headed oafs continue to mouth even now) are increasingly being marshalled by the women to enable them to stay at home. Perhaps one day they will tell us all that 17th-century doctors were absolutely correct to aver that women who thought too long and hard would find their brains exploded all over the floor.

More research needs to be done, of course. I have dealt only with middle-class women and therefore work needs to be done among the proletariat. I don't know many working-class women; they don't seem to like me. They think I'm effete, for some reason.