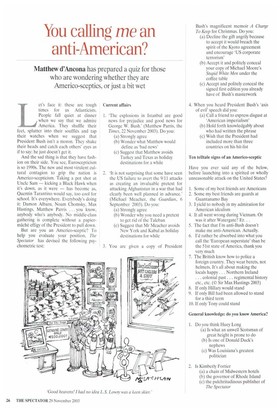 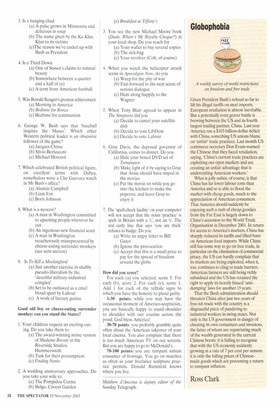 You calling me an

Matthew d'Ancona has prepared a quiz for those who are wondering whether they are Americo-sceptics, or just a bit wet

Let's face it: these are tough times for us Atlanticists. People fall quiet at dinner when we say that we admire America. They shuffle their feet, splutter into their souffles and tap their watches when we suggest that President Bush isn't a moron. They shake their heads and catch each others' eyes as if to say: he just doesn't get it.

And the sad thing is that they have fashion on their side. You see, Euroscepticism is so 1990s. The new and most virulent cultural contagion to grip the nation is Americo-scepticism. Taking a pot shot at Uncle Sam — kicking a Black Hawk when it's down, as it were — has become as, Quentin Tarantino would say, too cool for school. It's everywhere. Everybody's doing it: Damon Albarn, Noam Chomsky, Max Hastings, Matthew Parris . . . you know, anybody who's anybody. No middle-class gathering is complete without a papiermâché effigy of the President to pull down.

But are you an Americo-sceptic? To help you evaluate your position, The Spectator has devised the following psychometric test: Current affairs 1. 'The explosions in Istanbul are good news for prejudice and good news for George W. Bush.' (Matthew Parris, the Times, 22 November 2003). Do you: (a) Strongly agree (b) Wonder what Matthew would define as 'bad news' (c) Suggest that Matthew avoids Turkey and Texas as holiday destinations for a while 2. 'It is not surprising that some have seen the US failure to avert the 9/11 attacks as creating an invaluable pretext for attacking Afghanistan in a war that had clearly been well planned in advance.' (Michael Meacher, the Guardian, 6 September 2003). Do you: (a) Strongly agree (b) Wonder why you need a pretext to get rid of the Taleban (c) Suggest that Mr Meacher avoids New York and Kabul as holiday destinations for while Bush's magnificent memoir A Charge To Keep for Christmas. Do you: (a) Decline the gift angrily because to accept it would breach the spirit of the Kyoto agreement and encourage 'US corporate terrorism' (b) Accept it and politely conceal your copy of Michael Moore's Stupid White Men under the coffee table (c) Accept and politely conceal the signed first edition you already have of Bush's masterwork 4. When you heard President Bush's 'axis of evil' speech did you: (a) Call a friend to express disgust at 'American imperialism' (b) Hold forth knowledgably about who had written the phrase (c) Wish that the President had included more than three countries on his hit-list Ten telltale signs of an Americo-sceptic Have you ever said any of the below, before launching into a spirited or wholly unreasonable attack on the United States?

5. The fact that I'm anti-Bush doesn't make me anti-American. Actually, 6. I'd rather be absorbed into what you call the 'European superstate' than be the 51st state of America, thank you very much 7. The British know how to police a foreign country. They wear berets, not helmets. It's all about making the locals happy. . . Northern Ireland . . colonial past. . . regimental history etc., etc. (C Sir Max Hastings 2003) 8. If only Hillary would stand 9. If only Bill had been allowed to stand for a third term 10. If only Tony could stand General knowledge: do you know America?

1. Do you think Huey Long (a) Is what an unwell Scotsman of great height is prone to do (b) Is one of Donald Duck's nephews (c) Was Louisiana's greatest politician 2. Is Kimberly Fortier (a) a chain of Midwestern hotels (b) the governor of Rhode Island (c) the pulchritudinous publisher of The Spectator 3. Is a hanging chad (a) A pulse grown in Minnesota and delicious in soup (b) The name given by the Ku Klux Klan to its victims (c)The reason we've ended up with Bush as President 4. Is a Third Down (a) One of Sussex's claims to natural beauty (b) Somewhere between a quarter and a half of (a) (c) A term from American football 5. Was Ronald Reagan's greatest achievement (a) Morning in America (b) Bedtime for Boaz() (c) Bedtime for communism 6. George W. Bush says that 'baseball inspires the Muses'. Which other Western political leader is an obsessive follower of the game?

(a) A man in Washington committed to upsetting people wherever he can (b) An ingenious new financial scam (c) A man in Washington treacherously misrepresented by cheese-eating surrender monkeys (see next section) 9. Is To Kill a Mockingbird (a) Just another exercise in shabby pseudo-liberalism by the 'deceitful military-industrial complex' (b) Set to be outlawed as a cruel blood sport by Labour (c) A work of literary genius Good old boy or cheese-eating surrender monkey: can you stand the States?

L Your children request an exciting outing. Do you take them to: (a) The award-winning mime version of Madame Bovag at the Riverside Studios.

Hammersmith (b) Task for their presumption (c) Finding Nemo 2. A wedding anniversary approaches. Do you take your wife to: (a) The Pompidou Centre (b) Belgo, Covent Garden (c) Breakfast at Tiffany's 3. You see the new Michael Moore book (Dude, Where's My Royalty Cheque?) at your local shop. Do you reach for (a) Your wallet to buy several copies (h) The sick-bag (c) Your revolver (Colt, of course) 4. When you watch the helicopter attack scene in Apocalypse Now, do you (a) Weep for the pity of war (b) Fast-forward to the next scene of serious dialogue (c) Hum along happily to the Wagner 5. When Tony Blair agreed to appear in The Simpsons did you (a) Decide to cancel your satellite dish (b) Decide to vote LibDem (c) Decide to vote Labour 6. Gray Davis, the deposed governor of California, comes to dinner. Do you (a) Hide your boxed DVD set of Terminator (b) Make light of it by saying to Gray that Arnie should have stayed in the movies (c) Put the movie on while you go into the kitchen to make the popcorn, and leave Gray to enjoy it 7. The 'spell-check facility' on your computer will not accept that the noun 'practice' is spelt in Britain with a 'c', not an 's'. The red curly line that says 'you are thick' refuses to budge. Do you (a) Write an angry letter to Bill Gates (b) Ignore the provocation (c) Accept that this is a small price to pay for the spread of freedom around the globe How did you score?

1-30 points: while you may have the occasional moment of Americo-scepticism, you are basically happy to stand shoulder to shoulder with our cousins across the pond. God bless America!

30-70 points: you probably grumble quite often about the American takeover of your local cinema. You also complain that there is too much American TV on our screens. But you are happy to go to McDonald's.

70-100 points: you are rampant simian consumer of fromage. You go on marches as often as your freelance sculpture practice permits. Donald Rumsfeld knows where you live.

Matthew d'Ancona is deputy editor of the Sunday Telegraph.