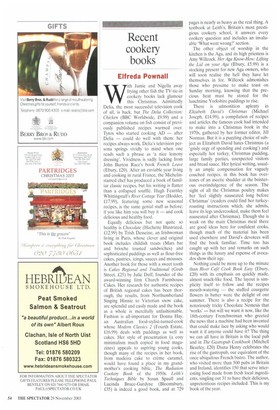 With Jamie and Nigella away frying other fish the TV-tie-in cookery books lack glamour this Christmas. Admittedly Delia, the most successful television cook of all, is back, but The Delia Collection: Chicken (BBC Worldwide, £9.99) and a companion volume on fish consist of previously published recipes warmed over. Tyros who started cooking AD — after Delia — could do well with them: her recipes always work. Delia's television persona springs vividly to mind when one reads such a phrase as 'a nice lemony dressing'. Vividness is sadly lacking from John Burton Race's book French Leave (Ebury, £20). After an enviable year living and cooking in rural France, the Michelinstarred chef has produced a book of familiar classic recipes, but his writing is flatter than a collapsed soufflé. Hugh Fearnley Whittingstall's River Cottage Year (Hodder, £17.99), featuring some new seasonal recipes, is the same genial stuff as before; if you like him you will buy it — and cook delicious and healthy food.

Equally delicious but not quite so healthy is Chocolate (Hachette Illustrated, £12.99) by Trish Desseine, an Irishwoman living in Paris, whose clever and original book includes childish treats (Mars bar and brioche toasted sandwiches) and sophisticated puddings as well as flour-free cakes, pastries, icings, sauces and mousses. Another book for those with a sweet tooth is Cakes Regional and Traditional (Grub Street, £25) by Julie Duff, founder of the award-winning firm Church Farmhouse Cakes. Her research for authentic recipes of British regional cakes has been thorough, the results, from Northumberland Singing Hinnie to Victorian snow cake, are splendid and easily made and the book as a whole is mercifully unfashionable. Fashion is all-important for Donna Hay, an Australian food-stylist-turned-cook whose Modem Classics 2 (Fourth Estate, £16.99) deals with puddings as well as cakes. Her style of presentation (a cosy minimalism much copied in food magazines) appeals to aspiring young cooks, though many of the recipes in her book, from madeira cake to creme caramel, would have found a place in my grandmother's cooking bible, The Radiation Cookery Book of the 1950s. Leith's Techniques Bible by Susan Spaull and Lucinda Bruce-Gardyne (Bloomsbury, £35) is indeed a good book, and at 729 pages is nearly as heavy as the real thing. A textbook at Leith's, Britain's most prestigious cookery school, it answers every cookery question and includes an invaluable 'What went wrong?' section.

The other object of worship in the kitchen is the Aga, and its high priestess is Amy Willcock. Her Aga Know-How: Lifting the Lid on your Aga (Ebury, £5.99) is a stocking present for new Aga owners, who will soon realise the hell they have let themselves in for. Willcock admonishes those who presume to make toast on Sunday morning, knowing that the precious heat must be stored for the lunchtime Yorkshire puddings to rise.

There is admonition aplenty in Elizabeth David's Christmas (Michael Joseph, £14.99), a compilation of recipes and articles the famous cook had intended to make into a Christmas book in the 1970s, gathered by her former editor, Jill Norman. But it is a puzzling choice of subject as Elizabeth David hates Christmas (a 'grisly orgy of spending and cooking') and especially hot turkey, Christmas pudding, large family parties, unexpected visitors and bread sauce. Her lyrical writing, usually an ample compensation for vaguely couched recipes, in this book has overtones of an ascetic shudder at the boisterous overindulgence of the season. The sight of all the Christmas poultry makes her 'feel slightly nauseated long before Christmas' (readers could find her turkeyroasting instructions which, she admits, leave its legs undercooked, make them feel nauseated after Christmas). Though she is weak on the main Christmas meal there are good ideas here for confident cooks, though much of the material has been used elsewhere and David's devotees will find the book familiar. Time too has caught up with her and remarks on such things as the luxury and expense of avocados show their age.

Nothing could be more up to the minute than River Café Cook Book Easy (Ebury, £20) with its emphasis on quickly made, almost snack-like food. The layout is simplicity itself to follow and the recipes mouth-watering — the stuffed courgette flowers in batter were the delight of our summer. There is also a recipe for the notoriously tricky Chocolate Nemesis that 'works' — but will we want it now, like the 18th-century Frenchwoman who greeted the news that a machine had been invented that could make lace by asking who would want it if anyone could have it? The thing we can all have in Britain is the local pub and in The Gastropub Cookbook (Mitchell Beazley, £20) Diana Henry celebrates the rise of the gastropub, our equivalent of the once ubiquitous French bistro. The author, who visited more than 500 pubs in Britain and Ireland, identifies 150 that serve interesting food made from fresh local ingredients, singling out 31 to have their delicious, unpretentious recipes included. This is my book of the year.