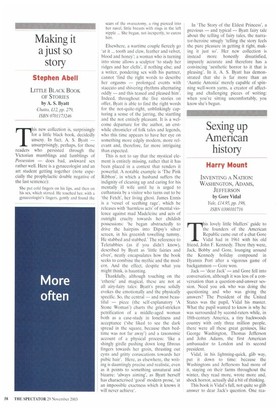 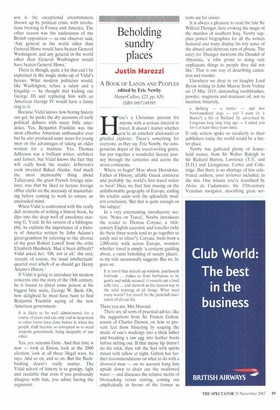 INVENTING A NATION: WASHINGTON, ADAMS, JEFFERSON by Gore Vidal Yale, £14.95, pp. 198, ISBN 0300101716 This lovely little bluffers' guide to the founders of the American Republic came out of a chat Gore Vidal had in 1961 with his old friend, John F. Kennedy. There they were, Jack, Bobby and Gore, lounging around the Kennedy holiday compound in Hyannis Port after a vigorous game of backgammon — Gore won.

Jack — 'dear Jack' — and Gore fell into conversation, although it was less of a conversation than a question-and-answer session. Need you ask who was doing the questioning and who was giving the answers? The President of the United States was the pupil, Vidal his master. What the pupil wanted to know is why he was surrounded by second-raters while, in 18th-century America, a tiny backwoods country with only three million people, there were all these great geniuses, like George Washington, Thomas Jefferson and John Adams, the first American ambassador to London and its second president.

Vidal, in his lightning-quick, glib way, put it down to time: because the Washingtons and Jeffersons had more of it, staying on their farms throughout the winter, they read more, wrote more and, shock horror, actually did a bit of thinking.

This book is Vidal's full, not quite so glib answer to dear Jack's question. One rea

There is, though, quite a lot that can't be explained in the magic make-up of Vidal's heroes. What modern politician would, like Washington, refuse a salary and a kingship — he thought that kicking out George III and replacing him with an American George IV would have a funny ring to it,

Because Vidal knows how boring history can get, he packs the dry accounts of early political debates with saucy little anecdotes. Yes, Benjamin Franklin was the most effective American ambassador ever but he also produced some notes for young men on the advantages of taking an older woman for a mistress. Yes, Thomas Jefferson was a brilliant writer, architect and farmer, but Vidal knows the fact that will really hook the reader: Jefferson's cook invented Baked Alaska. And much the most memorable thing about Talleyrand, the great French foreign minister, was that he liked to lecture foreign office clerks on the necessity of masturbating before coming to work to ensure an unclouded mind.

When Vidal is confronted with the really dull moments of writing a history book, he dips into the deep well of anecdotes starring G. Vidal. In his version of a bibliography, he explains the importance of a history of America written by John Adams's great-grandson by referring to the divorce of the poet Robert Lowell from the critic Elizabeth Hardwick, Had it been difficult? Vidal asked her. 'Oh, not at all,' she said, 'except, of course, the usual intellectuals' quarrel over which of us should get Henry Adams's History.' If Vidal is going to introduce his modern concerns into the story of the 18th century, he is bound to direct some poison at his biggest bete noire, George W. Bush. Oh, how delighted he must have been to find Benjamin Franklin saying of the new American government:

It is likely to be well administered for a course of years and can only end in despotism as other forms have done before it, when the people shall become so corrupted as to need despotic government, being incapable of any other.

Yes, yes, screams Gore. And that time is now — look at Enron, look at the 2000 election, look at all these illegal wars, he says. And so on, and so on. But the Bushbashing doesn't really matter. The Vidal school of history is so gossipy, light and readable that even if you profoundly disagree with him, you adore having the argument.