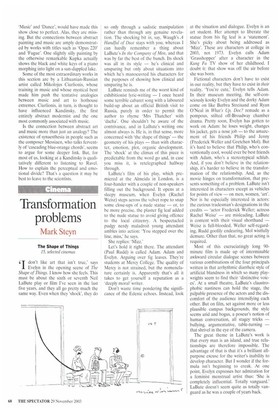 The Shape of Things 15, selected cinemas 41" don't like art that isn't true,' says 1 Evelyn in the opening scene of The Shape of Things. I know how she feels. This must be about the sixth or seventh Neil LaBute play or film I've seen in the last five years, and they all go pretty much the same way. Even when they 'shock', they do so only through a sadistic manipulation rather than through any genuine revelation. The shocking bit in, say, Waugh's A Handful of Dust stays with you, whereas I can hardly remember a thing about LaBute's In the Company of Men, and that was by far the best of the bunch. Its shock was all in its style — he's clinical and unsparing but only about situations into which he's manoeuvred his characters for the purposes of showing how clinical and unsparing he is.

LaBute reminds me of the worst kind of exhibitionist lyric-writing — I once heard some terrible cabaret song with a laboured build-up about an official British visit to Russia, purely in order to permit the author to rhyme 'Mrs Thatcher' with 'dacha'. One shouldn't be aware of the contrivance, and in LaBute's writing one almost always is. He is, in that sense, more concerned with 'the shape of things' — the geometry of his plays — than with character, emotion, plot, organic development. The 'shock' at the climax of this piece is predictable from the word go and, in case you miss it, is retelegraphed halfway through.

LaBute's film of his play, which premiered at the Almeida in London, is a four-hander with a couple of non-speakers filling out the background. It opens at a sleepy museum, when Evelyn (Rachel Weisz) steps across the velvet rope to snap some close-ups of a nude statue — or, to be more precise, the plaster fig leaf added to the nude statue to avoid giving offence to the local citizenry. A bespectacled pudgy nerdy maladroit young attendant ambles into action: 'You stepped over the line, miss,' he says.

Let's hold it right there. The attendant (Paul Rudd) is called Adam. Adam and Evelyn. Arguing over fig leaves. They're students at Mercy College. The quality of Mercy is not strained, but the nomenclature certainly is. Apparently that's all it takes to get yourself a reputation as a 'deeply moral' writer.

Don't waste time pondering the significance of the Edenic echoes. Instead, look

at the situation and dialogue. Evelyn is an art student. Her attempt to liberate the statue from his fig leaf is a 'statement'. She's picky about being addressed as `Mizz.. These are characters at college in 2003, not 1973. Evelyn calls Adam 'Grasshopper' after a character in the Kung Fu TV show of her childhood. I doubt it: that show was off the air before she was born.

Fictional characters don't have to exist in our reality, but they have to exist in their reality. 'You're cute,' Evelyn tells Adam. In their museum meeting, the self-consciously kooky Evelyn and the dorky Adam come on like Barbra Streisand and Ryan O'Neal in What's Up, Doc? remade as a pompous, stilted off-Broadway chamber drama. Pretty soon, Evelyn has gotten to work on Adam: he loses weight, changes his jacket, gets a nose job — to the amazement of his friends Philip and Jenny (Frederick Weller and Gretchen Mol). But it's hard to believe that Philip, who's conventionally cool, would ever be best friends with Adam, who's a stereotypical schlub. And, if you don't believe in the relationship, it's harder to believe in the transformation of the relationship. And, as the movie hinges on transformation, that presents something of a problem. LaBute isn't interested in characters except as vehicles for points of view — on men, women, 'art'. Nor is he especially interested in actors: the curious tradesman's designations in the credits — 'actor Frederick Weller; actress Rachel Weisz' — are misleading. LaBute is content with their visual shorthand — Weisz is full-blooded, Weller self-regarding, Rudd goofily endearing, Mol wistfully demure. Other than that, no great acting is required.

Most of this excruciatingly long 90minute film is made up of interminable awkward circular dialogue scenes between various combinations of the four principals written in that arrhythmic diarrheic style of artificial blandness in which so many playwrights seem to find their 'distinctive voices'. At a small theatre, LaBute's claustrophobic nastiness can hold the stage, the palpable presence of the actors and the discomfort of the audience intensifying each other. But on film, set against more or less plausible campus backgrounds, the style seems arid and bogus, a poseur's notion of human conversation, all stagey tricks — bullying, argumentative, table-turning — that shrivel in the eye of the camera.

The great theme in LaBute's work is that every man is an island, and true relationships are therefore impossible. The advantage of that is that it's a brilliant allpurpose excuse for the writer's inability to develop character. But I wonder if the formula isn't beginning to creak. At one point, Evelyn expresses her admiration for a feminist menstrual artist thus: 'She is completely influential. Totally vanguard.' LaBute doesn't seem quite as totally vanguard as he was a couple of years back.