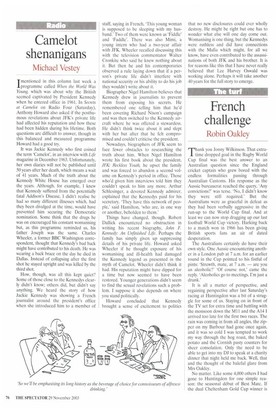 I mentioned in this column last week a programme called When the World Was Young, which was about why the British seemed captivated by President Kennedy when he entered office in 1961. In Secrets at Camelot on Radio Four (Saturday), Anthony Howard also asked if the posthumous revelations about IFK's private life had affected his reputation and how these had been hidden during his lifetime. Both questions are difficult to answer, though in this balanced and measured programme Howard had a good try.

It was Jackie Kennedy who first coined the term 'Camelot', in an interview with Life magazine in December 1963. Unfortunately, her own diaries will not be published until 50 years after her death, which means a wait of 41 years. Much of the truth about the Kennedy White House has emerged over the years. Although, for example, I knew that Kennedy suffered from the potentially fatal Addison's Disease, I didn't realise he had so many different illnesses which, had they been divulged at the time, would have prevented him securing the Democratic nomination. Some think that the drugs he was on encouraged his constant womanising but, as this programme reminded us, his father Joseph was the same. Charles Wheeler, a former BBC Washington correspondent, thought that Kennedy's bad back might have contributed to his death. He was wearing a back brace on the day he died in Dallas. Instead of collapsing after the first shot he stayed upright and was killed by the third shot.

How, though, was all this kept quiet? Some of those close to the Kennedys clearly didn't know; others did, but didn't say anything. We heard the story of how Jackie Kennedy was showing a French journalist around the president's office when she introduced him to a member of staff, saying in French, 'This young woman is supposed to be sleeping with my husband.' Two of them were known as 'Fiddle' and Tadclle'. There was also Mimi, a young intern who had a two-year affair with JFK. Wheeler recalled discussing this with the television commentator Walter Cronkite who said he knew nothing about it. But then he and his contemporaries observed a rule laying down that if a person's private life didn't interfere with national security or his ability to do his job they wouldn't write about it.

Biographer Nigel Hamilton believes that Kennedy drew in journalists to prevent them from exposing his secrets. He remembered one telling him that he'd been covering Richard Nixon's campaign and was then switched to the Kennedy aircraft where he was offered a stewardess. He didn't think twice about it and slept with her but after that he felt compromised and couldn't criticise the president.

Nowadays, biographers of JFK seem to face fewer obstacles to researching the truth about him. When Nigel Hamilton wrote his first book about the president, JFK. Reckless Youth, he upset the family and was forced to abandon a second volume on Kennedy's period in office. Those who'd given him interviews told him they couldn't speak to him any more. Arthur Schlesinger, a devoted Kennedy admirer, explained that the Kennedys paid for his secretary. 'They have this network of people,' said Hamilton, 'who are, in one way or another, beholden to them.'

Things have changed, though. Robert Da!lick encountered no obstruction in writing his recent biography, John F. Kennedy: An Unfinished Life. Perhaps the family has simply given up suppressing details of his private life. Howard asked Wheeler if he thought exposure of his womanising and ill-health had damaged the Kennedy legend as presented in the myth of Camelot. Wheeler didn't think it had. His reputation might have dipped for a time but now seemed to have been restored. Younger generations didn't seem to find the sexual revelations such a problem. I suppose it also depends on where you stand politically.

Howard concluded that Kennedy brought a sense of excitement to politics that no new disclosures could ever wholly destroy. He might be right but one has to wonder what else will one day come out. Womanising is one thing, but the Kennedys were ruthless and did have connections with the Mafia which might, for all we know, have even contributed to the assassinations of both JFK and his brother. It is for reasons like this that I have never really believed that Lee Harvey Oswald was working alone. Perhaps it will take another 40 years for the full story to emerge.