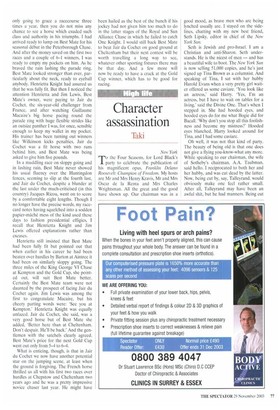 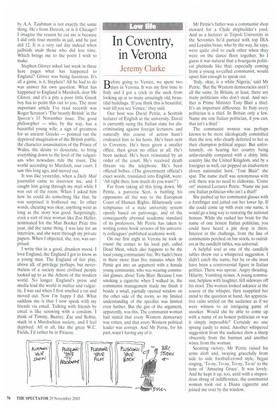 To the Four Seasons, for Lord Black's party to celebrate the publication of his magnificent opus, Franklin Delano Roosevelt: Champion of Freedom. My hosts are Mr and Mrs Henry Kravis, Mr and Mrs Oscar de la Rents and Mrs Charles Wrightsman. All the great and the good have shown up. Our chairman was in a

good mood, as brave men who are being lynched usually are. I stayed on the sidelines, chatting with my new best friend, Seth Lipsky, editor in chief of the New York Sun.

Seth is Jewish and pro-Israel. I am a Christian and anti-Sharon. Seth understands. He is the nicest of men — and has a beautiful wife to boot. The New York Sun is now selling 51,000 copies, and he's just signed up Tina Brown as a columnist. And speaking of Tina, I sat with her hubby Harold Evans when a very pretty girl waiter offered us some caviare. 'You look like an actress,' said Harry. 'Yes, I'm an actress, but I have to wait on tables for a living,' said the Divine One. That's when I stepped in. She had hooded eyes, and hooded eyes do for me what Bogie did for Bacall. 'Why don't you stop all this foolishness and become my mistress?' Hooded eyes blanched, Harry looked around for Tina, and I had some caviare.

Oh well, it was not that kind of party. The beauty of being old is that one does not give a flying you-know-what any more. While speaking to our chairman, the wife of Sotheby's chairman, A.A. Taubman, said hello. I reciprocated to both her and her hubby, and was cut dead by the latter. Now, being cut by, say, Talleyrand, would obviously make one feel rather small. After all, Talleyrand may have been an awful shit, but he had manners. Being cut by A.A. Taubman is not exactly the same thing. He's from Detroit, or is it Chicago? I imagine the reason he cut me is because I did only four months in jail, and he just did 12. It is a very sad day indeed when jailbirds snub those who did less time. Which brings me to the point I wish to make.

Stephen Glover asked last week in these here pages what has happened to England? Glover was being facetious. It's all a game, is it, Stephen? All he had to do was answer his own question. What has happened to England is Murdoch, dear Mr Glover, and it's a pity a poor little Greek boy has to point this out to you. The most important article I've read recently was Roger Scruton's 'The beastly British' in the Speccie's 15 November issue. The good philosopher — who, by the way, has a beautiful young wife; a sign of greatness for us ancient Greeks — pointed out the depraved imagination of the British public, the character assassination of the Prince of Wales, the desire to desecrate, to bring everything down to the level of the vulgarians who nowadays rule the roost. The world according to Murdoch, tout court. I saw this long ago, and moved out.

It was like yesterday, when a Daily Mail journalist came to interview me, and I caught him going through my mail while I was out of the room. When I asked him how he could do something like that, he was surprised it bothered me. In other words, cheating was okay, anything went as long as the story was good. Surprisingly, even a sort of nice woman like Zoe Heller, nominated for the Man Booker Prize this year, did the same thing. I was late for an interview, and she went through my private papers. When I objected, she, too, was surprised.

I write this in a good, drunken mood. I love England, the England I got to know as a young man. The England of fair play, above all, of privilege perhaps, but nevertheless of a society most civilised people looked up to as the Athens of the modern world. No longer. England's press and media lead the world in malice and vulgarity. I was sad when I first smelled a rat and moved out. Now I'm happy I did. What saddens me is that I now speak with my friends via email. Talking with friends by email is like screwing with a condom. I think of Timmy, Bunter, Zac and Robin, stuck in a Murdochian society, and I feel deprived. All in all, like the great W.C. Fields, I'd rather be in Piraeus.