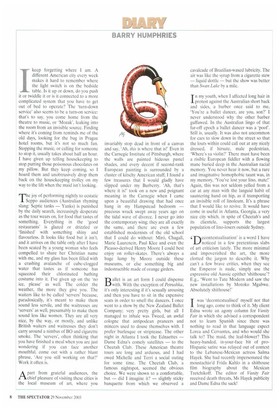 Page 8, 29 November 2003 — I keep forgetting where I am. A different American city every
Close

I keep forgetting where I am. A different American city every

week makes it hard to remember where the light switch is on the bedside table. Is it up or down, do you push it or twiddle it or is it connected to a more complicated system that you have to get Out of bed to operate? The 'turn-down service' also seems to be a turn-on service: that's to say, you come home from the theatre to music, or `Mozak', leaking into the room from an invisible source. Finding where it's coming from reminds me of the old days, looking for the bug in Prague hotel rooms, but it's not so much fun. Stopping the music, or calling for someone to stop it, usually takes about half an hour. I have given up telling housekeeping to stop putting those poisonous chocolates on my pillow. But they keep coming. so I hoard them and unobtrusively drop them back on the housekeeping trolley on my way to the lift when the maid isn't looking.

Thej"of performing nightly to ecstatic Seppo audiences (Australian rhyming slang: Septic tanks — Yanks) is punished by the daily search, increasingly desperate as the tour wears on, for food that tastes of something. Everything in the 'good restaurants' is glazed or drizzled or 'finished' with something shiny and flavourless. It looks like food but it isn't, and it arrives on the table only after I have been seated by a young woman who feels compelled to share her Christian name with me, and my glass has been filled with a crashing avalanche of cube-clogged water that tastes as if someone has squeezed their chlorinated bathing costume into it. I've given up on the 'no ice, please' as well. The colder the weather, the more they give you. The waiters like to be called 'servers' because, paradoxically, it's meant to make them sound less servile, and the waitresses are 'servers' as well, presumably to make them sound less like women. They are all very nice, by the way, or mostly, and unlike British waiters and waitresses they don't carry around a nimbus of 130 and cigarette smoke. The 'servers', often thinking that you have finished a meal when you are just wondering if you can face another mouthful, come out with a rather blunt phrase, 'Are you still working on that?' Work it often is.

Apart from grateful audiences, the chief pleasure of visiting these cities is the local museum of art, where you

invariably stop dead in front of a canvas and say, Ah, this is where that is!' Even in the Carnegie Institute of Pittsburgh, where the walls are painted hideous pastel shades, and every decent if second-rank European painting is surrounded by a cluster of kitschy American stuff, I found a few treasures that I would gladly have slipped under my Burberry. `Ah, that's where it is!' took on a new and poignant meaning in the Carnegie when I came upon a beautiful drawing that had once hung in my Hampstead bedroom — precious wrack swept away years ago on the tidal wave of divorce. I never go into the contemporary wing; they are all exactly the same, and there are even a few established modernists of the old school that I could do without: Mire), Chagall, Marie Laurencin, Paul Klee and even the Picasso-derived Henry Moore I could best enjoy on roller-skates. There's always a huge lump by Moore outside these museums, or else something big and indestructible made of orange girders.

Ballet is an art form I could dispense with. With the exception of Petrushka, ifs only interesting if it's sexually arousing and then you have to sit in the expensive seats in order to smell the dancers. I once went to a show by the New Zealand Ballet Company; very pretty girls, but all I managed to inhale was Tweed, an awful cologne that antipodean prancers and mincers used to douse themselves with. I prefer burlesque or striptease. The other night in Atlanta I took the Ednaettes — Dame Edna's comely satellites — to the Cheetah Club. These American theatre tours are long and arduous, and I had owed Michelle and Terri a social outing for some time. The Cheetah Club, a famous nightspot, seemed the obvious choice. We were shown to a comfortable, but — did I imagine it? — slightly sticky banquette from which we observed a

cavalcade of Brazilian-waxed lubricity. The air was like the syrup from a cigarette stew — liquid dottle — but the show was better than Swan Lake by a mile.

In my youth, when I affected long hair in protest against the Australian short back and sides, a barber once said to me, 'You're a ballet dancer, are you, son?' I never understood why the other barber guffawed. In the Australian lingo of that far-off epoch a ballet dancer was a `poof. Still is, usually. It was also not uncommon for cars to slow down in the street so that the louts within could call out at any nicely dressed, if hirsute, male pedestrian, 'Where's ya violin?' There must have been a risible European fiddler with a flowing mane buried deep in the Australian racial memory. You never hear it now, but a rare and imaginative homophobic taunt was, in my memory, 'You've lost your lino, mate!' Again, this was not seldom yelled from a car at any man with the languid habit of sauntering hand on hip, as if transporting an invisible roll of linoleum. It's a phrase that I would like to revive, It would have come in useful in Atlanta, Georgia, a very nice city which, in spite of Cheetah's and its clientele, supports the largest population of lino-losers outside Sydney.

1-1 econtextualisation' is a word I have I./noticed in a few pretentious slabs of art criticism lately. The more minimal and impoverished the art, the more clotted the jargon to describe it. Why can't a few brave critics, when they see the Emperor is nude, simply use the expressive old Aussie epithet `shithouse'? E.g., 'Went to Tate Modern and saw the new installations by Motoko Mgabwe. Absolutely shithouse!'

T was `decontextualised. myself not that I long ago, come to think of it. My client Edna wrote an agony column for Vanity Fair in which she advised a correspondent not to learn Spanish since there was nothing to read in that language expect Lorca and Cervantes, and who would she talk to? The maid, the leaf-blower? This heavy-handed, in-your-face bit of proHispanic satire was relayed out of context to the Lebanese-Mexican actress Salma Hayek. She had recently impersonated the moustachio'd Frida Kahlo in a shithouse film biography about the Mexican Tretchikoff. The editor of Vanity Fair received death threats, Ms Hayek publicity and Dame Edna the sack!