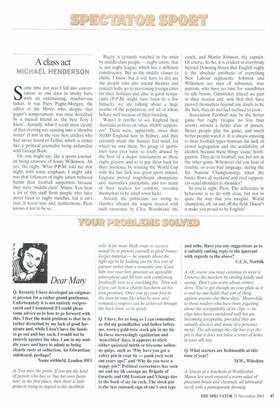 Some time last year I fell into conversation, as one does in smoky bars, with an entertaining, mischievous talker. It was Piers Pughe-Morgan, the editor of the Mirror, who, despite that paper's temperament, was once described by a mutual friend as 'the best Tory I know'. Actually, what I recall most clearly of that evening was running into a 'showbiz writer' (I mix in the very best circles) who had never heard of Fellini, which is rather like a political journalist being unfamiliar with George Bush.

Or, one might say, like a sports journalist being unaware of Jonny Wilkinson. Ah yes, the rugby. What P.P-M. told me that night, with some emphasis, I might add, was that followers of rugby union behaved better than football supporters because they were 'middle class'. Mrnm. You hear a lot of this stuff from people who have never been to rugby matches, but it isn't true, it never was, and, furthermore, Piers knows it not to be so. Rugby is certainly watched in the main by middle-class people — rugby union, that is, not rugby league, which has a different constituency. But as the middle classes (a cliché, I know, but it will have to do) are the people who also attend theatres and concert halls, go to interesting foreign cities for their holidays and dine in good restaurants (P.P-M. might have been to a few himself), we are talking about a huge swathe of the population, not all of whom behave well because of their breeding.

Wasn't it terrific to see England beat Australia in front of. what, 40,000 supporters? There were, apparently, more than 50,000 England fans in Sydney, and they certainly made the Aussies feel small, for which we owe them. No group of sportsmen have ever been so foully abused by the host of a major tournament as these rugby players, and so to pay them back for their insolence by winning the World Cup with the last kick was great sport indeed. England proved magnificent champions, and Australia's journalists, and too many of their readers for comfort, revealed themselves to be small-town hicks.

Already the politicians are trying to clamber aboard the wagon steered with such assurance by Clive Woodward, the coach, and Martin Johnson, the captain. Of course, ho-ho, it is evident to everybody beyond Downing Street that English rugby is the absolute antithesis of everything New Labour represents. Johnson and Wilkinson are men of substance, true patriots, who have no time for soundbites or idle boasts. Gimmickry played no part in their success and, now that they have proved themselves beyond any doubt to be the best, they do not feel inclined to crow.

Association Football may be the better game but rugby (league no less than union) attracts a better class of person. Better people play the game, and much better people watch it. It is always amusing to hear football types bemoan the lack of crowd segregation and the availability of alcohol, because these things 'cause' hooliganism. They do in football, yes, but not in the other game. Whenever did you hear of trouble, or even bad language, during the Six Nations Championship, when the booze flows all weekend and rival supporters stand shoulder to shoulder?

So you're right, Piers. The difference in behaviour is to do with class, but not in quite the way that you imagine. World champions, eh, on and off the field. Doesn't it make you proud to be English?