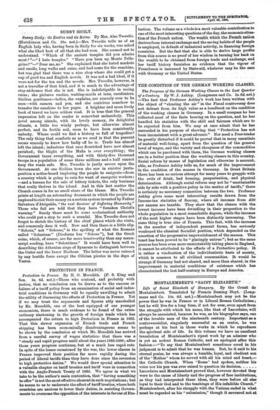 THE CONDITION OF THE GERMAN WORKING CLASSES.

The Progress of the German Working Classes in the Last Quarter of a Century. By W. J. Ashley. (Longmans and Co. is. 6d. net.) —The fact that Professor Ashley's work has been written with the object of "clearing the air" in the Fiscal controversy does not detract from its high value as a handbook on the condition of the working classes in Germany. In a small compass he has collected most of the facts bearing on the question, and he has handled his statistics with the skill and fairness which are to be expected from him. We may at once admit that he has succeeded in his purpose of showing that "Protection has not been inconsistent with a great advance." Nor need a Free-trader be greatly disturbed if it could be proved that in many essentials of material well-being, apart from theY question of the general level of wages, and the variety and cheapness of the commodities which can be purchased with them, the German working classes are in a better position than the working classes in this country. Social reform by means of legislation and otherwise is account.. able, as Professor Ashley tells us, for much of the improvement in the condition of the masses in Germany. In Great Britain there has been no serious attempt for many years to grapple with the evils of drink, bad housing, pauperisation, and physical deterioration. Although social reform may not be "unattainable side by side with a positive policy in the matter of tariffs," there is certainly no necessary connection between the two. Professor Ashley gives some most interesting results drawn from the Income-tax statistics of Saxony, where all incomes from .£20 per annum are taxable. They show that the classes with the lowest incomes have been dwindling in their proportion to the whole population in a most remarkable degree; while the incomes of the next higher stages have been distinctly increasing. The same thing is true also of Prussia. This fact, with the increase in the number of independent peasant farms, has seriously weakened the classical Socialist position, which depended on the assertion of the progressive impoverishment of the masses. This tenet has been proved to be "glaringly untrue"; but as the same process has been even more unmistakably taking place in England, it cannot be attributed to the effects of a Protective policy. It is rather a vindication of the individualistic basis of society, which is common to all civilised communities. It would be strange if Germany had not shared, and more than shared, in the improvement in material conditions of existence which has characterised the last half-century in Europe and America.