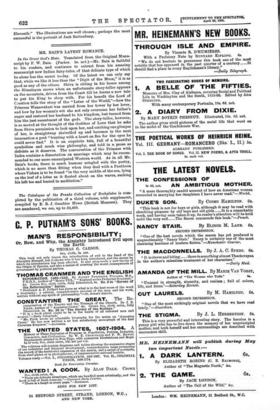 In the Great God's Hair. Translated from the Original Manu- script by F. W. Bain. (Parker. 5s. net.)—Mr. Bain is faithful to his readers, and continues to extract from his amazing manuscript new Indian fairy-tales. of that delicate type of which he alone has the secret to-day. Of the latest we can only say that, while we like it less than the "Digit of the Moon," it is as good as any of the others. Shiva is sitting in his house among the Himalayan snows when an unfortunate story-teller appears on the mountain, driven from the Court till he learns a new tale to put his King to sleep with. For his benefit the Lord of C:eation tells the story of the "Lotus of the World,"—how the Princess Wanawakari was carried from her tower by her lover, and how by her woman's wit she not only overcame her father's anger and restored her husband to his kingdom, but turned from him the just resentment of the gods. The story-teller, however, is so moved at the thought of the Goddess of Love that he asks from Shiva permission to look upon her, and catching one glimpse of her, is straightway shrivelled up and becomes in the next incarnation a poet "hunting with a heart on fire for the eyes he could never find." It is an exquisite tale, full of a beautiful symbolism and much wise philosophy, and told in a prose as delicate as it deserves. The conversation of the Princess with India contains a dissertation on marriage which may be recom- mended to our more emancipated Western world. As in all Mr.

Bain's books, there is much humour mingled with the poetry, which is no more than fitting when they deal with a Pantheon whore Vishnu is to be found "in the very middle of the sea, lying on the leaf of a lotus as it floated about on the waves, sucking his left toe and buried in meditation."