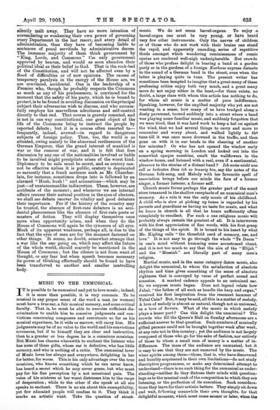 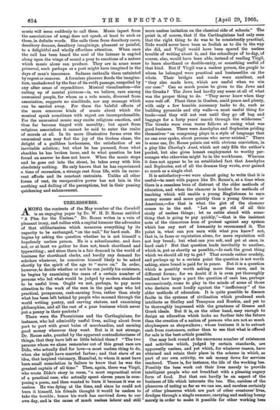 I T is possible to be unmusical and yet to love

music ; indeed, it is more than possible, it is very common. To be musical in any proper sense of the word a man (or woman) must have a true ear, a fair musical memory, and some critical faculty. That is, he must be able to exercise sufficient dis- crimination to enable him to conceive judgments and con- victions concerning composers and executants so far as his musical experience, be it wide or narrow, will carry him. His judgments may be of no value to the world and his convictions erroneous, but if to himself they are clear and instructive, then to a greater or less degree he is a conscious musician. But Music has charms wherewith to enchant the listener who has none of these gifts, whose ear is defective, who has little memory, and who is nothing of a critic. The unmusical lover of Music loves her always and everywhere, delighting in her for better, for worse. This is his only advantage over the true musician, who knows something which he can never know, has heard a secret which he may never guess, but who must pay for his fine perception by a not occasional pain. The voice of his mistress at her worst distresses him to the verge of desperation ; while to the other if she speak at all she speaks to enchant. There is no sin about this susceptibility, yet few educated people will confess to it. They think it marks an artistic want. Take the question of street- music. We do not mean barrel-organs. To enjoy a barrel-organ one must be very young, or have heard very few other instruments. Only the nerves of children or of those who do not work with their brains can stand the rapid, and apparently unending, series of repetitive thuds amongst which wandering reminiscences of comic operas are rendered well-nigh undecipherable. But crowds of those who profess delight in hearing a band at a garden party or in the gardens of a foreign Ifurhaus express distaste to the sound of a German band in the street, even when the latter is playing quite in tune. The present writer has sometimes been tempted to imagine that a great many of these professing critics enjoy both very much, and a great many more do not enjoy either in the least,—for there exists, no doubt, a large class with whom this article has nothing to do, for whom all music is a matter of pure indifference. Speaking, however, for the ungifted majority who yet are not wanting in a sense, how many of us have trudged along a dusty pavement, turned suddenly into a street where a band was playing some familiar music, and suddenly forgotten that we were tired, that it was hard work to keep a hat on against the wind, that we had several things to carry and more to remember and worry about, and walked lightly to the tune till it was once more drowned in the traffic, and then gone on with it in our heads to the cheering of another few minutes ? Or who has not opened the window early on a spring morning in London and looked out into the somewhat opaque sunshine, smelt the wallflowers in the window-boxes, and listened with a real, even if a sentimental, pleasure to the strains of a distant band P Ich weiss nicht was soil es bedeuten Doss ich so traurig bin, say the notes of the German folk-song, and Melody with her favourite spell of association brings before our minds the face of a former singer, a former listener, a former self.

Church music forms perhaps the greater part of the scant store treasured in the shallow receptacle of an unmusical man's memory. As a rule it was the only music of his childhood. A child who is slow at picking up tunes is regarded by his parents and guardians as having no taste for music, and what he hears in church is all that he hears sufficiently often completely to recollect. For such a one religious music will probably always remain the greatest of all. It is interwoven with his first appreciation of fine words, with his first grasp of the things of the spirit. It is bound to his heart by what Mr. Kipling calls "the threefold cord of memory, use, and love." It is not easy to go through the whole " Te Deum " in one's mind without humming some accustomed chant, and it is not too much to say that the airs of the " Elijah " and the " Messiah " are literally part of many men's religion.

Martial music, and in the same category dance music, also delight the unmusical, to whom the satisfaction of absolute rhythm and time gives something of the sense of absolute rightness that is conveyed by verse of perfect sound and scansion. A marked cadence appeals to an untrained ear. So we suppose music began. Does not legend relate how Jubal, "the father of all such as handle the harp and organ," received his first inspiration from the resonant hammer of Tubal Cain ? But, it may be said, all this is a matter of melody. A love of melody is almost as natural, though not so universal, as a love of flowers. What of the music in which melody plays a lesser part ? Can this delight the unmusical? The crowds who fill the Queen's Hall on Sunday afternoons are a sufficient answer to that question. Such numbers of musically gifted persons could not be brought together week after week, at any rate not in this country; yet the audience is not largely composed of those who go for the sake of fashion, nor entirely of those to whom a small sum of money is a matter of in- difference. The mass of the audience are unmusical, but it is easy to see that they are not unmoved by the music. The wiser spirits among them—those, that is, who have discovered and humbly acquiesced in their own limitations—do not study descriptive programmes, or make any determined attempt to understand—there is no such thing for the unmusical as under- standing—neither do they distress their minds with question- ings as to the musical rank of the composition to which they are listening, or the perfection of its execution. Such considera- tions they leave for their artistic betters. They simply sit down and wait, following meanwhile their own thoughts, for that delightful moment, which must come sooner or later, when the

music will seem suddenly to call them. Music (apart from the associations of song) does not speak, at least to such as these, in definite words. She calls them from desultory cares, desultory dreams, desultory imaginings, pleasant or painful, to a delightful and wholly effortless attention. When once the call has been heard the soul of the listener is cavied along upon the wings of sound a prey to emotions of a nature which music alone can produce. They are in some sense primeval, such perhaps as a poet might have imagined in the days of man's innocence. Sadness enthralls them untainted by regret or remorse. A formless pleasure floods the imagina- tion, unshadowed by the fear of its swift passage, unspoiled by any after sense of expenditure. Musical visualisation—the calling up of mental pictures—is, we believe, rare among unmusical people, for whom as a rule music, divorced from association, suggests no similitude, nor any message which can be carried away. For them the baleful effects of the more sensuous kinds of music about which the musical speak sometimes with regret are incomprehensible. For the unmusical music may excite religious emotion, and thus far become tinged with morality; but apart from religious association it cannot be said to enter the realm of morals at all. In its more illustrative forms even the unmusical man may feel the joy of the tireless chase, the delight of a guiltless lawlessness, the satisfaction of an inevitable solution; but what he has pursued, from what shackles he has broken loose, and to what question he has found an answer he does not know. When the music stops and he goes out into the street, he takes away with him absolutely nothing. He only knows that he has experienced a time of recreation, a strange rest from life, with its recur. rent efforts and its constant restraints. Unlike all other forms of rest, its recuperative power has not lain in the soothing and dulling of the perceptions, but in their passing quickening and enhancement.