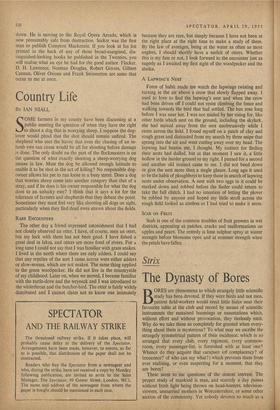 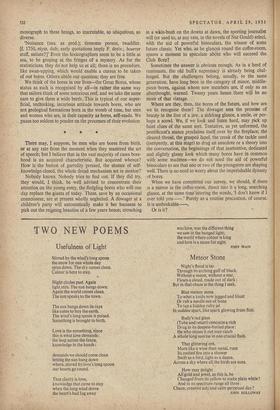 The Dynasty of Bores

monograph to these beings, so inscrutable, so ubiquitous, so diverse.

`Nuisance (usu. as pred.); tiresome person, twaddler. [f. 1750, etym. dub; early quotations imply F. deriv.; bourrer stuff, satiate?]' Even the lexicographers seem to be a little at sea, to be groping at the fringes of a mystery. As for the statisticians, they do not help us at all; there is no procedure, like swan-upping, which would enable a census to be taken of our bores. Others abide our question; they are free.

We think of the bores in our lives—the Great Bores, whose status as such is recognised by all—in rather the same way that sailors think of some notorious reef, and we take the same care to give them a wide berth. This is typical of our super- ficial, unthinking, incurious attitude towards bores, who are not geological formations born in the womb of time, but men and women who are, in their capacity as bores, self-made. We pause too seldom to ponder on the processes of their evolution.

There may, I suppose, be men who are bores from birth, or at any rate from the moment when they mastered the art of speech; but I believe that in the vast majority of cases bore- hood is an acquired characteristic. But acquired whence? How is the button of garrulity pressed, the shutter of self- knowledge closed, the whole dread mechanism set in motion?

Nobody knows. Nobody tries to find out. If they did try, they would, I think, be well advised to concentrate their attention on the young entry, the fledgling bores who will one day replace the 'giants of today. These, save by an occasional connoisseur, are at present wholly neglected. A dowager at a children's party will automatically make it her business to pick out the reigning beauties of a few years hence; crouching in a whin-bush on the downs at dawn, the sporting journalist will (or used to, at any rate, in the novels of Nat Gould) select, with the aid of powerful binoculars, the winner of some future classic. Yet who, as he glances round the coffee-room, spares a moment to speculate about who will succeed the Club Bore?

Sometimes the answer is obvious enough. As in a herd of ruminants, the old bull's supremacy is already being chal- lenged. But the challengers belong, usually, to the same generation, have long been in the category of minor, middle- piece bores, against whom new members are, if only as an afterthought, warned. Twenty years hence there will be no more of that vintage.

Where are they, then, the bores of the future, and how are we to recognise them? The dowager sees the promise of beauty in the line of a jaw, a sidelong glance, a smile, or per- haps a scowl. We, if we look and listen hard, may pick up faint clues of the same sort. Tentative, as yet unformed, the pontificant's stance proclaims itself over by the fireplace; the cleared throat, the grasped lapel, the creak of the tackle used (inexpertly, at this stage) to drag an anecdote or a theory into the conversation, the beginnings of that inattentive, dedicated and slightly glassy look which many bores have in common with some madmen—we do not need the aid of powerful binoculars to see that one or two of the youngsters are shaping well. There is no need to worry about the imperishable dynasty of bores.

When we have completed our survey, we should, if there is a mirror in the coffee-room, direct into it a long, searching glance, at the same time uttering the words. 'I don't know if I ever told you—.' Purely as a routine precaution, of course. It is unthinkable--.