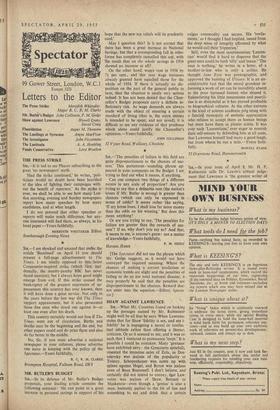 proposals, your leading article contains the following sentence: 'He can point to a great increase in personal savings in support of his hope that the new tax reliefs will hie prudently used.'

May I question this? Is it not correct that there has been a great increase in National Savings, but that a corresponding fall in other forms has completely cancelled this out, with the result that on the whole savings in 1954 showed no increase at all?

On the other hand, wages rose in 1954 by 71. per cent., and this year wage increases already granted have equalled those for the whole of 1954. If there is actually no dis- position on the part of the general public to save, then the situation is surely very serious indeed. It has not been denied that the Chan- cellor's Budget proposals carry a definite in- flationary risk. As wage demands are always made with the object of ensuring a certain standard of living (that is, the extra money Is intended to be spent, and not saved), it is difficult to see any evidence of that prudence which alone could justify the Chancellor's optimism.—Yours faithfully,