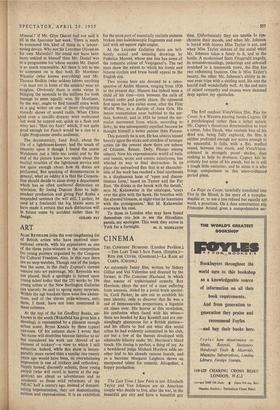 ALAN REYNOLDS joins the ever-lengthening list of British artists who have received inter- national awards, with his appearance as one of the three prize-winners in the competition for young painters organised by the Congress for Cultural Freedom. Alas, in this race there are no stop-watches. Though one of the judges was the same, in the Daily Express's current venture into art patronage, Mr. Reynolds was not placed. Such a spotlight is turned upon young talent today that the 251 works by 194 Young artists at the New Burlington Galleries can scarcely be said to spring many surprises. Within the age brackets there were few absten- tions, and of the eleven prize-winners, only three, I think, have not been mentioned in these columns.

At the top of the list Geoffrey Banks, un- known in the south (Wakefield has given him a showing), is represented by a pleasant enough urban scene; Bryan Kneale by three typical canvases. Of his autumn show I wrote that his name will doubtless become familiar to us' but considered his work not 'devoid of an element of trickery'—a view to which I still subscribe. Indeed, while this show is incom- parably more varied than a similar one twenty years ago would have been, its overwhelming Impression is one of trickery and orthodoxy. Neatly turned, discreetly eclectic, these young people (who will recoil in horror at the sug- gestion) are about as adventurous and as academic as those mild reformists of the NEAC half a century ago. Instead of domesti- cating impressionism, they are domesticating cubism and expressionism. It is an exhibition for the most part of essentially realistic pictures broken into kaleidoscopic fragments and over- laid with set-square right-angles.

At the Leicester Galleries there are bril- liantly casual and amusing drawings by Federico Moroni, whose pen line has some of the romantic colour of Vespignani's. The red stars show the extent to which his ironic and bizarre cyclists and brass bands appeal to the English eye.

Two rooms here are devoted to a retro- spective of Andrd Masson, ranging from 1930 to the present day. Masson has indeed been a child of his time—torn between the calls of formal order and poetic chaos. He appeared first upon the late cubist scene, after the First World War, as a disciple of Juan Gris. His innate romanticism soon bubbled to the sur- face, however, and in 1924 he joined the sur- realist movement from which, according to Soby, he was subsequently expelled because he thought himself a better painter than Picasso.

This patently he is not. He has always leaned heavily upon the sticks and crutches of stronger artists (in the present show there are echoes of Cezanne, Renoir, Dufy, Picasso among others). Now his expressionistic world of bulls and insects, erotic and cosmic cataclysms, has whirled its way to final destruction. In its place the unresolved flux that is so character- istic of his work has reached a final apotheosis in a diaphanous haze of 'open and discon- tinuous form,' based on Turner and the Far East. He drinks in the brook with the thrush,' says M. Kahnweiler in the catalogue, 'soars over the glen with the hawk. He breathes with the almond blossom, at night-time he luxuriates with the pomegranate.' But M. Kahnweiler overstates his case.

To those in London who may have found themselves too late to see the Hiroshima panels, my apologies. This week they arrive in