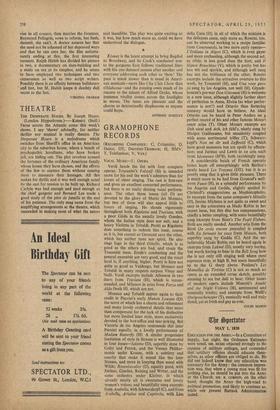 (RECORDING COMPANIES: C, Columbia; D, Decca; DT, Ducretet-Thomson; H, HMV; T, Telcfunken; V, Vox.) VOCAL Music—I: OPERA Verdi heads the list with four complete operas. Toscanini's Falstaff (H) is intended more for his and the work's admirers than for lovers of sheer singing. The cast is first-rate and gives an excellent concerted performance, but there is no really shining vocal perform- ance. The other three issues (all D) arc devoted to the glory of Mario del Monaco, but two of these will also appeal little to lovers of singing. He shouts vigorously throughout both Rigoletto and Traviata, with a poor Gilds in the usually lovely Gueden, whom the Italian style does not suit, and a heavy Violetta in Tebaldi. Protti as Rigoletto does something to redeem this issue, coarse as it is, but cannot as Germont save the other, which has neither taste nor spirit. He also sings lago in the third Othello. which is as good as the others are bad, and rivals the Toscanini issue. Erede's conducting and the general ensemble are very good, and the vocal level is, if anything, higher. Protti is here not quite as good as Valdengo, but Monaco and , Tebaldi in many respects surpass Vinay and Neill. Verdi excerpts include Albanese in two duets from Traviata (H), which is recom- mended, and Milanov in arias from Forza and Aida (both H), which are not.

Monaco and Tebaldi appear again to their

della Casa (D), in all of which the mixture is the delicious same, only more so. Rossini, too, can be observed working to a recipe familiar from Cencrentola, in two more early operas- L'Italiona in Algeri (C). which is even gayer and more enchanting, although the second act. as often, is less good than the first; and 11 Signor Bruschino (V), which is pretty but has less wit and sparkle. and although well sung has not the brilliance of the other. Rossini excerpts include the attractive overture to this work, by Toscanini (H), and Una voce poco fez sung by los Angeles, not well (H). Glynde- bourne's pre-war Don Giovanni (H) is welcome in a new issue, although slightly farther short of perfection in Anna, Elvira (as what perfor- mance is not?) and Ottavio than flattering memory would have us believe. An ideal Ottavio can be heard in Peter Anders on a perfect record of his and other famous Mozart tenor arias (T). Other Mozart excerpts are Deh vieni and Ach, ich fat's, nicely sung by Margot Guilleaume, but unsuitably coupled with some sentimental trifles (T).; Schwarz- kopf's Non mi dir and Zeffiretti (C), which have good moments but are spoilt by affecta- tion; and Jurinac and Lewis in an aria each from Idomenco (H78), both ravishingly sung.

A considerable batch of French operatic issues leads off enterprisingly with Berlioz's rarely heard Les Troyens (DT), but it is so poorly sung that it gives little pleasure. There is much more to be had from Gounod's well- worn Faust (H), in a splendid performance by los Angeles and Gedda, slightly spoiled by Christoff's exaggerations as Mephistopheles. In excerpts from the same composer's Mireille (0), Janine Micheau is not quite as sweet and easy in the coloratura as Mado Robin in her recent issue, but this disc has compensations, chiefly a better coupling, with some beautifully sung excerpts from Bizet's The Pearl Fishers. Both are really needed. Another aria from the Bizet (Je crois encore entendre) is coupled with En fermant les yeux from Mallon, both superbly sung by Gedda (C). And the un- believable Mado Robin can be heard again in excerpts from Lakme (D), mostly very boring, but worth having to hear in the Bell Song how she is not only still singing well where most sopranos stop, at high B, but soars beautifully up to the G sharp above. Poulenc's Les Mamelles de Tiresias (C) is not so much an opera as an extended revue sketch, possibly amusing to sec but dull to hear. Other issues of modern opera include Menotti's A►nabl and the Night Visitors (H), sentimental and musically trashy; and excerpts from Weill's Drcigroschenoper CD, musically well and truly dated, yet as fresh and gay as ever.