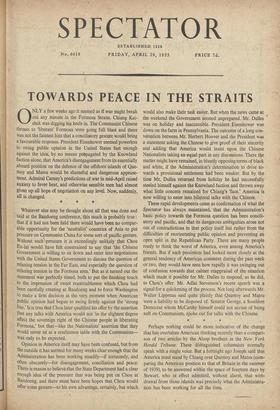 TOWARDS PEACE IN THE STRAITS

0 NLY a few weeks ago it seemed as if war might break out any minute in the Formosa Straits. Chiang Kai- shek was digging his heels in. The Communist Chinese threats to 'liberate' Formosa were going full blast and there was not the faintest hint that a conciliatory gesture would bring a favourable response. President Eisenhower seemed powerless to swing public opinion in the United States fast enough against the idea, by no means propagated by the Knowland faction alone, that America's disengagement from its essentially absurd position on the defence of the offshore islands of Que- moy and Matsu would be shameful and dangerous appease- ment. Admiral Carney's predictions of war in mid-April raised anxiety to fever heat, and otherwise sensible men had almost given up all hope of negotiation on any level. Now, suddenly, all is changed.

Whatever else may be thought about all that was done and said at the Bandoeng conference, this much is probably true : that if it had not been held there would have been no compar- able opportunity for the 'neutralist' countries of Asia to put pressure on communist China for some sort of pacific gesture. Without such\ pressure it is exceedingly unlikely that Chou En-lai would have felt constrained to say that 'the Chinese Government is willing to sit down and enter into negotiations with the United States Government to discuss the question of relaxing tension in the Far East, and especially the question of relaxing tension in the Formosa area.' But as it turned out the statement was perfectly timed, both to put the finishing touch to the impression of sweet reasonableness which Chou had been carefully creating at Bandoeng and to force Washington to make a firm decision at the very moment when American public opinion had begun to swing firmly against the 'strong line.' It is true that Chou later qualified his offer by the assertion that any talks with America would not 'in the slightest degree affect the sovereign right of the Chinese people in liberating Formosa,' but that—like the Nationalists' assertion that they would never sit at a conference table with the Communists— was only to be expected.

Opinion in America itself may have been confused, but from the outside it has seemed for many weeks clear enough that the Administration has been working steadily—if tortuously, and often obscurely—for disengagement, conciliation and peace. There is reason to believe that the State Department had a clear enough idea of the pressure that was being put on Chou at Bandoeng, and there must have been hopes that Chou would offer some gesture—to his own advantage, certainly, but which would also make their task easier. But when the news came at the weekend the Government seemed unprepared. Mr. Dulles was on holiday and inaccessible. President Eisenhower was down on the farm in Pennsylvania. The outcome of a long con- versation between Mr. Herbert Hoover and the President was a statement asking the Chinese to give proof of their sincerity and adding that America would insist upon the Chinese Nationalists taking an equal part in any discussions. There the matter might have remained, in bluntly opposing terms of black and white, if the Administration's determination to drive to- wards a provisional settlement had been weaker. But by the time Mr. Dulles returned from holiday he had successfully steeled himself against the Knowland faction and thrown away what little concern remained for Chiang's 'face.' America is now willing to enter into bilateral talks with the Chinese.

These rapid developments come as Confirmation of what the Spectator has always maintained, that the Administration's basic policy towards the Formosa question has been concili- atory and pacific, and that its dangerous ambiguities arose not out of contradictions in that policy itself but rather from the difficulties of reorientating public opinion and preventing an open split in the Republican Party. There are many people ready to think the worst of America, even among America's friends. But if such pessimists had looked more closely at the general tendency of American comment during the past week or two, they would have seen how rapidly it was swinging out of confusion towards that calmer reappraisal of the situation which made it possible for Mr. Dulles to respond, as he did, to Chou's offer. Mr. Adlai Stevenson's recent speech was a signal for a quickening of the process. Not long afterwards Mr. Walter Lippman said quite plainly that Quemoy and Matsu were a liability to be disposed of. Senator George, a Southern Democrat whom McCarthy himself could not accuse of being soft on Communism, spoke out for talks with the Chinese.

Perhaps nothing could be more indicative of the change that has overtaken American thinking recently than a compari- son of two articles by the Alsop brothers in the New York Herald Tribune. These distinguished columnists normally speak with a single voice. But a fortnight ago Joseph said that America must stand by Chiang over Quemoy and Matsu (com- paring the American position to that of Britain in the summer of 1939), to be answered within the space of fourteen days by Stewart, who in _effect admitted, without alarm, that with- drawal from those islands was precisely what the Administra- tion has been working for all the time.