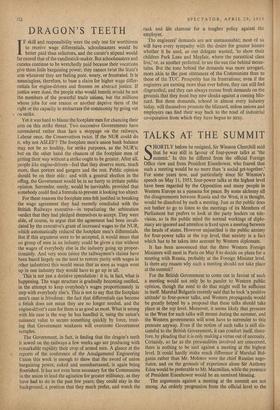 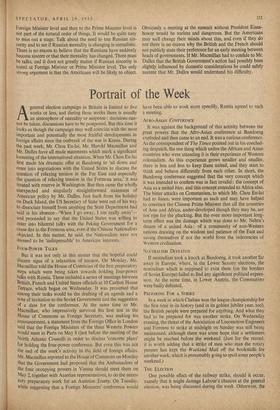 TALKS AT THE SUMMIT

SHORTLY before he resigned, Sir Winston Churchill said that he was still in favour of four-power talks at 'the summit.' In this he differed from the official Foreign Office view and from President Eisenhower, who feared that such a meeting would be no more than 'a social get-together.' For some years now, and particularly since Sir Winston's speech on May 11, 1953, four-power talks at the highest level have been regarded by the Opposition and many people in Western Europe as a panacea for peace. By some alchemy all the disagreements between Russia and the West, it is thought, would be dissolved by such a meeting. Just as the public does not bother to go to listen to the meetings of its Members of Parliament but prefers to look at the party leaders on tele- vision, so in the public mind the normal workings of diplo- macy are ignored and attention is fixed upon a meeting between the heads of states. However unjustified is the public anxiety for four-power talks at the top level, that anxiety is a fact which has to be taken into account by Western diplomats.

It has been announced that the three Western Foreign Ministers will meet in Paris on May 8 to decide on plans for a meeting with Russia, probably at the Foreign Minister level. Is there any reason why such a meeting should not take place at the summit?

For the British Government to come out in favour of such a meeting would not only be to pander to Western public opinion, though the need to do that might well be sufficient in itself. Marshal Bulganin recently said that he took 'a positive attitude' to four-power talks, and Western propaganda would be greatly helped by a proposal that these talks should take place at the top level. Moreover, it seems likely that pressure in the West for such talks will mount during the summer, and the Western governments will soon have to surrender to this pressure anyway. Even if the notion of such talks is still dis- tasteful to the British Government, it can comfort itself, there- fore, by pleading that it is only making a virtue out of necessity.

Certainly, so far as the personalities involved are concerned, there is nothing to be said against a meeting at the highest Foreign Minister level and then to the Prime Minister level is not part of the natural order of things. It would be quite easy to miss out a stage. Talk about the need to test Russian sin- cerity and to see if Russian mentality is changing is unrealistic. There is no reason to believe that the Russians have suddenly become sincere or that their mentality has changed. There must be talks, and it does not greatly matter if Russian sincerity is tested at Foreign Minister or Prime Minister level. The only strong argument is that the Americans will be likely to object. Obviously a meeting at the summit without President Eisen- hower would be useless and dangerous. But the Americans may well change their minds about this, and even if they do not there is no reason why the British and the French should not publicly state their preference for an early meeting between heads of governments. If Mr. Macmillan had to confide to Mr. Dulles that the British Government's action had possibly been slightly influenced by domestic considerations he could safely assume that Mr. Dulles would understand his difficulty.