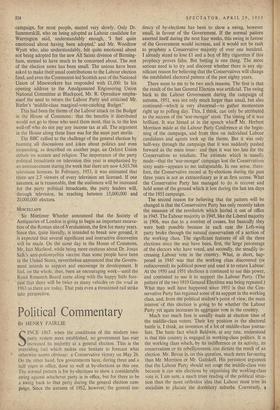 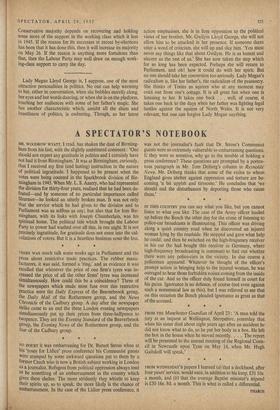 By HENRY FAIRLIE SINCE 1867, when the conditions of the modern two- party system were established, no government has ev,er increased its majority at a general election. This is the overriding fact which makes one hesitate to forecast what otherwise seems obvious : a Conservative victory on May 26. On the other hand, few governments have, during three and a half years' in office, done so well at by-elections as this one. The normal pattern is for by-elections to show a considerable swing against whichever party is in office, but for there to be a swing back to that party during the general election cam- paign. Since the autumn of 1952, however, the general ten- dency of by-elections has been to show a swing, however small, in favour of the Government. If the normal pattern asserted itself during the next four weeks, this swing in favour of the Government would increase, and it would not be rash to prophesy a Conservative majority of over one hundred. I already stand to lose £1 and a box of fifty cigarettes if this prophecy proves false. But betting is one thing. The more serious need is 'to try and discover whether there is any sig- nificant reason for believing that the Conservatives will change the established electoral pattern of the past eighty years.

There seem to me to be two such reasons. The first is that the result of the last General Election was artificial. The swing back to the Labour Government during the campaign of autumn, 1951, was 'nbt only much larger than usual, but also continued—which is very abnormal—to gather momentum right up to polling day. This, I think, can only be attributed to the success of the `war-monger' stunt. The timing of it was brilliant. It was hinted at in the speech 'whic1 Mr. Herbert Morrison made at the Labour Party Conference at the begin- ning of the campaign, and from then on individual Labour candidates and agents took up the theme. But it was only half-way through the campaign that it was suddenly pushed forward as the main issue : and then it was too late for the Conservatives to retaliate. The estimate which is usually made—that the `war-monger' campaign lost the Conservatives sixty seats—appears to me indisputable. In one sense, there- fore, the Conservative record at by-elections during the past three years is not as extraordinary as it at first seems. What the Conservative Party has managed to do is recover and hold some of the ground which it lost during the last ten days of the 1951 campaign.

The second reason for believing that the pattern will be changed is that the Conservative Party has only recently taken the measure of the revolutidn which hurled it out of office in 1945. The Labour majority in 1945, like the Liberal majority in 1906, was due to a number of causes, but basically they were both possible because in each case the Left-wing party broke through the natural conservatism of a section of the working class. The significant features of all the three elections since the war have been, first, the large percentage of the electors who have voted, and secondly, the steadily in- creasing Labour vote in the country. What, in short, hap- pened in 1945 was that the working class discovered (or rediscovered) its political power and used it to return Labour1 At the 1950 and 1951 elections it continued to use this power, and continued to use it to support the Labour 'Party. (The pattern of the two 1910 General Elections was being repeated.) What may well have happened since 1951' is that the Con- servative Party has regained some of its support in the working class, and, from the political student's point of view, the main interest of this election is going to be whether the Labour Party yet again increases its aggregate vote in the country.

Much too much fuss is usually made at election time of the middle-class voters. Their key position in the electoral battle is, I think, an invention of a lot of middle-class journa- lists. The basic fact which Baldwin, at any rate, understood is that this country is engaged, in working-class politics. It is the, working class which, by its indifference or its activity, its conservatism or its rebelliousness, can dictate the result of an election. Mr. Bevan is, on this question, much more far-seeing than Mr. Morrison or Mr. Gaitskell. His persistent argument that the Labour Party should not court the middle-class vote because it can win elections by organising the working-class vote is, I am sure, a much truer reading of the political situa- tion than the more orthodox idea that Labour must trim its socialism to placate the dormitory suburbs. Conversely, a Conservative majority depends on recovering and holding some more of the support in the working class which it lost in 1945. If the reason for its successes at recent by-elections has been that it has done this, then it will increase its majority on May 26. If the reason is anything more fortuitous than that, then the Labour Party may well draw on enough work- ing-class support to carry the day. action emphasises, she is in firm opposition to the political views of her brother, Mr. Gwilym Lloyd George, she will not allow him to be attacked in her presence. If someone dares utter a word of criticism, she will up and slay him. 'You must never say things like that about Gwilym. He is as honest and sincere as the rest of us.' She has now taken the step which for so long has been expected. Perhaps she will return to Parliament, and oh! how it could do with her spirit. But no one should take her conversion too seriously. Lady Megan's radicalism is, like her father's, the radicalism of the peasantry. She thinks of Tories as squires who at any moment may evict one from one's cottage. It is all great fun when one is listening to her. It takes one back . . . well, of course, it takes one back to the days when her father was fighting legal battles against the squires of North Wales. It is not very relevant, but one can forgive Lady Megan anything.