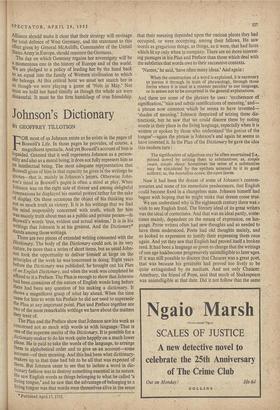 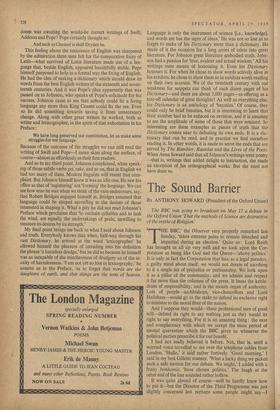 8Y GEOFFREY TILLOTSON FOR most of us Johnson exists as he exists in the pages of Boswell's Life. In those pages he provides, of course, a magnificent spectacle. And yet Boswell's account of him is lopsided. Granted that it well represents Johnson as a. person- ality and also as a moral being, it does not fully represent him as an intellectual being. The most adequate repr.esentation that Boswell gives of him in that capacity he gives in the writings he quotes—that is, mainly in Johnson's letters. Otherwise John- son's mind in Boswell's pages is often a mind at play. When Johnson was on the right side of dinner and among delightful Companions he displayed his mental powers rather for the sake of display. On these occasions the object of his thinking was not so much truth as victory. It is in his writings that we find his mind responsibly concerned with truth, which for him was mainly truth about man as a public and private person—in Boswell's words 'true, evident and actual wisdom.' It is in his writings that Johnson is at his greatest. And the Dictionary* stands among those writings. There are two pieces of extended writing connected with the Dictionary. The body of the Dictionary could not, in its very nature, be more than a series of short items, but as usual John- son took the opportunity to deliver himself at large on the Principles of the work he was +concerned in doing. Eight years before the Dictionary was published, he brought out his Plan of an English Dictionary, and when the work was completed he affixed to it a Preface. The Plan is enough to show that Johnson had been conscious of the nature of English words long before there had been any question of his making a dictionary. It shows a magnificent grasp of what lay ahead. When the time came for him to write his Preface he did not need to supersede the Plan at any important point. Plan and Preface together are two of the most remarkable writings we have about the matters they treat of.

The Plan and the Preface show that Johnson saw his work as Concerned not so much with words as with language. That is one of the supreme merits of the Dictionary. It is possible for a dictionary-maker to do his work quite happily on a much lower Plane. He is paid to take the words of the language, to arrange them in alphabetical order and to give us an account—some account—of their meaning. And this had been what dictionary- Makers up to that time had felt to be all that was expected of them. But Johnson came to see that to isolate a word in dic- tionary fashion was to destroy something essential in its nature. He saw English words as things belonging to what he called 'a living tongue,' and he saw that the advantage of belonging to a living tongue was that words were themselves alive in the sense

that their meaning depended upon the various places they had occupied, or were occupying, among their fellows. He saw words as gregarious things, as things, as it were, that had faces which lit up only when in company. There are no more interest- ing passages in his Plan and Preface than those which deal with the subtleties that words owe to their successive contexts.

`Names,' he said, 'have often many ideas.' And again : When the construction of a word is explained, it is necessary to pursue it through its train of phraseology, through those forms where it is used in a manner peculiar to our language, or in senses not to be comprised in the general explanations.

And these are some of the phrases he uses : 'exuberance of signification; 'nice and subtle ramifications of meaning,' and— a phrase now common which he seems to have invented— 'shades of meaning.' Johnson despaired of seizing these dis- tinctions, but he saw that we could discern them by noting words in their place in the living language, especially when it is written or spoken by those who understand 'the genius of the tongue'—again the phrase is Johnson's and again he seems to have invented it. In the Plan of the Dictionary he gave the idea this modern turn : The signification of adjectives may be often ascertained [i.e., pinned down] by uniting them to substantives; as, simple swain, simple sheep. Sometimes the sense of a substantive may be elucidated by the epithets annexed to it in good authors; as, the boundless ocean, the open lawns.

Now it had been the dream of some of Johnson's contem- poraries and some of his immediate predecessors, that English could become fixed in a changeless state. Johnson himself had begun with hoping that he might make that dream come true.

We can understand why in the eighteenth century there was a wish to see English fixed. The literary ideal of its great writers was the ideal of correctness. And that was an ideal partly, some- times mainly, dependent on the means of expression, on lan- guage. Prose writers often had new thoughts and so needed to have them understood. Poets had old thoughts mainly, and so looked to expression to justify their expressing them once again. And yet they saw that English had proved itself a broken reed. It had been a language so given to change that the writings of one age had.become progressively unintelligible to later 'ages. If it was still possible to discern that Chaucer was a great poet, that was because his greatness had proved too lively to be quite extinguished by its medium. And not only Chaucer. Atterbury, the friend of Pope, said that much of Shakespeare was unintelligible at that date. Did it not follow that the same doom was awaiting the would-be correct writings of Swift, Addison and Pope? Pope certainly thought so : And such as Chaucer is shall Dryden be.

This feeling about the transience of English was sharpened by the admiration these men felt for the comparative fixity of Latin—what survived of Latin literature made use of a lan- guage that, beside English, appeared beautifully stable. Pope himself purposed to help in a formal way the fixing of english. He had the idea of making a dictionary which should draw its words from the best English writers of the sixteenth and seven- teenth centuries. And it was Pope's plan apparently that was passed on to Johnson, who speaks of Pope's solicitude for his success. Johnson came to see that nobody could fix a living language any more than King Canute could fix the sea. Even so he did something towards saving it from unnecessary change. Along with other great writers he worked, both as writer and lexicographer, in the spirit of that exhortation in his Preface : We have long preserved our constitution, let us make some struggles for our language.

Because of the outcome of the struggles we can still read the writing of Swift and Pope—I mean skim along the surface, of course—almost as effortlessly as their first readers.

And so to my third point. Johnson complained, when speak- ing of those subtle verbs get, take, and so on, that in English we had too many of them. Modern linguists will resent that com- ' plaint. But Johnson himself knew it was an idle one. He saw his office as that of 'registering' not 'forming' the language. We can see how wise he was when we think of the vain endeavours, say, that Robert Bridges engaged himself in. Bridges assumed that language could be shaped according to the desires of those interested in shaping it. What a pity he did not read Johnson's Preface which proclaims that 'to enchain syllables and to lash the wind, are equally the undertakings of pride, unwilling to measure its desires by its strength.' Language is only the instrument of science [i.e., knowledge], and words are but the signs of ideas.' He was not so lost as to forget to make of his Dictionary more than a dictionary. He made of it the occasion for a long series of inlets into great literature. For Johnson great literature embodied truth. John- son had a passion for 'true, evident and actual wisdom.' All his writings were means of honouring it. Even his Dictionary honours it. For when he chose to show words actively alive in his exhibits, he chose to show them so in exhibits worth reading on their own account. We of the twentieth century with our weakness for snippets can think of each dozen pages of his Dictionary—and there are about 3,000 pages—as offering us a tear-off calendar of great thoughts! As well as everything else, his Dictionary is an anthology of 'beauties.' Of course, they could only be brief beauties, but it is interesting to learn that their number had to be reduced on revision, and it is amusing to see the amplitude of some of those that were retained. So interesting are these examples as pieces of truth that the Dictionary comes near to defeating its own ends. It is a dic- tionary that can be read, and in practice we find ourselves reading it. In other words, it is made to serve the ends that are served by The Rambler, Rasselas and the Lives of the Poets. When Anna Seward said that all Johnson's writings were poetry —that is, writings that added delight to instruction, she made an exception of his orthographical works. But she need not have done so.