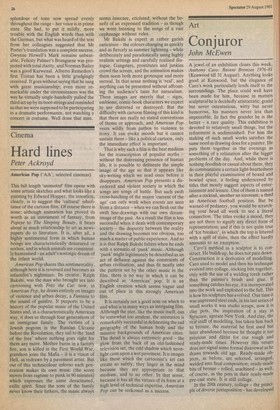 American Pop ('AA', selected cinemas) This full length 'animated' film opens with some artistic sketches and what looks like a painting by Edward Hopper; the intention, clearly, is to suggest the 'cultural' inheritance of the cartoon film. Of course there is none: although animation has proved its worth as an instrument of fantasy, from Popeye to The Sleeping Beauty, it bears about as much relationship to art as newspapers do to literature. It is, after all, a highly sentimental form in which human beings are characteristically denatured or sexless, and in which animals are consistently humanised — an adult's nostalgic dream of the infant world.

American Pop shares this sentimentality, although here it is reversed and becomes an infantilist's nightmare. Its creator, Ralph Bakshi, was the man who brought sex into cartooning with Fritz the Cat: now, in American Pop, he draws entirely on images of violence and urban decay, a Fantasia to the sound of gunfire. It purports to be a history of the popular music of the United States and, in a characteristically American way, it does so through four generations of an immigrant family. The victims of a Jewish pogrom in the Russian Ukraine before the Revolution, they sail to the 'land of the free' where nothing goes right for them any more. Mother burns in a factory fire, son is killed in the First World War, grandson joins the Mafia — it is a vision of Hell, as redrawn by a pavement artist. But out of this technicolour inferno each generation makes its own music (the score moves from ragtime to punk in 90 minutes) which expresses the same deracinated, exilic spirit. Since the sons of the family never know their fathers, the music always seems insecure, etiolated, without the benefit of an expressed tradition — as though we were listening to the songs of a vast orphanage without rules.

Mr Bakshi is expert at rather garish caricature — the colours changing as quickly and as fiercely as summer lightning — while deliberately and paradoxically using highly realistic settings and carefully realised dialogue. Gangsters, prostitutes and junkies crowd the screen, and the animation makes them seem both more grotesque and more surreal. In that sense nothing is 'real', and anything can be presented without affronting the audience's taste for naturalism. These images are merely that — signs, emblems, comic-book characters we expect to see distorted or destroyed. But the difficulty with cartoon filming of this kind is that there are really no stated conventions of theme or approach, and American Pop veers wildly from pathos to violence to irony. It can evoke moods but it cannot sustain them — like a political cartoon, only the immediate effect is important.

That is why such a film is the best medium for the transcription of populist myths — without the distressing presence of human life, it is possible to delineate the simple image of the age so that it appears like sky-writing which we read once before it disappears. American Pop presents a disordered and violent society in which the songs are songs of battle. But such swift cross-hatching of the major 'current of the age' can only work when events are seen from a distance — when we can flesh out the swift line-drawings with our own dreamimage of the past. As a result the film is less successful when it deals with contemporary society — the disparity between the reality and the drawing becomes too obvious, too much a matter of public experience. And so it is that Ralph Bakshi falters when he ends with a scenario of 'punk' music. Although 'punk' might legitimately be described as an act of defiance against the constraints of urban civilisation, and thus fit neatly into the pattern set by the other music in the film, there is no way in which it can be described as 'American' pop. It is an English creation which seems vague and out of place in this strongly American film.

It is certainly not a good note on which to end what is in many ways an intriguing film. Although the plot, like the music itself, can be somewhat too strident, the animation is remarkably successful in delineating the sad geography of the human body and the massive backgrounds of American cities. The detail is always extremely good — the glow from the back of an old-fashioned television set, the odd shadow which neonlight casts upon a wet pavement. It is images like these which the cartoonist's art can create so subtly; they linger in the mind because they are appropriate to that medium, and to no other. In that sense, because it has all the virtues of its form at a high level of technical expertise, American Pop can be reckoned as a success.