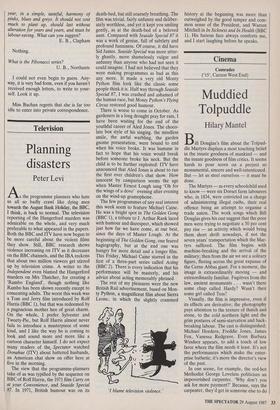 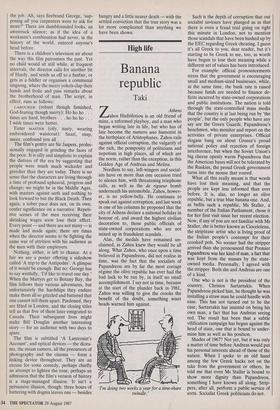 The Martyrs — as every schoolchild used to know — were six Dorset farm labourers who, in 1834, were convicted on a charge of administering illegal oaths, their real offence being an attempt to organise a trade union. The work songs which Bill Douglas gives his cast suggest that the poor men were trying to negotiate a 50 per cent pay rise — an activity which would bring them short shrift nowadays, if not the seven years' transportation which the Mar- tyrs suffered. The film begins with machine-breaking and the arrival of the military; then from the air we see a solitary figure, fleeing across the great expanse of the Cerne Abbas giant. For a moment, the image is extraordinarily moving — and extraordinarily familiar. Fugitives from the law, ancient monuments . . . wasn't there some chap called Hardy? Wasn't their some girl called Tess?

Visually, the film is impressive, even if its effects are derivative; the photography pays attention to the texture of thatch and stone, to the cold northern light and the grim postures of semi-starvation and back- breaking labour. The cast is distinguished: Michael Hordern, Freddie Jones, James Fox, Vanessa Redgrave. Even Barbara Windsor appears, to add a touch of low farce where the film needs it least. It's not the performances which make the enter- prise bathetic; it's more the director's view of the past.

In one scene, for example, the red-hot Methodist George Loveless politicises an impoverished carpenter. 'Why don't you ask for more payment?' Because, says the carpenter, they'd get in someone else to do the job. Ah, says firebrand George, `sup- posing all you carpenters were to ask for more?' There are dumbfounded looks, an awestruck silence; as if the idea of a workmen's combination had never, in the history of the world, entered anyone's head before.

There is a children's television air about the way this film patronises the past. Yet no child would sit still while, at frequent intervals, the director calls for another bit of Hardy, and sends us off to a funfair, or gets in a fiddler or organises a communal singsong, where the merry yokels clap their hands and frolic and pass remarks about the brotherhood of man. The script, in effect, runs as follows: LABOURER (robust though famished, God-fearing though merry): Ho ho ho . . . times are hard, brothers . . . ho ho ho . . . I wish times were better.

The film's gentry are Sir Jaspers, profes- sionally engaged in grinding the faces of the poor. It is silly and simplistic to explain the distress of the era by suggesting that people were much much wickeder and greedier than they are today. There is no sense that the characters are living through a time of profound upheaval, progress and change; we might be in the Middle Ages, with masters against serfs and nothing to look forward to but the Black Death. Then again, a sober pace does not, on its own, confer significance on a narrative. Repeti- tive scenes of the men receiving their shrinking wages soon lose their effect. Every point — and there are not many — is made and made again; there are times when the director seems to be fighting the same war of attrition with his audience as the men with their employers.

Nothing, either, is left to chance. At a fair we see a poster offering a sideshow called 'A trip to the Antipodes'. A glimpse of it would be enough. But no: George has to say wistfully, 'I'd like to travel one day.' When the Martyrs get to Botany Bay, the film follows their various adventures, but unfortunately the hardships they endure make them all so grizzled and battered that one cannot tell them apart. Pardoned, they are feted in London, and the closing titles tell us that five of them later emigrated to Canada. Their subsequent lives might make Bill Douglas another interesting story — for an audience with two days to spare.

The film is subtitled 'A Lanternist's Account', and optical devices — the diora- ma, the steam camera, all the precursors of photography and the cinema — form a linking device throughout. They are an excuse for some comedy, perhaps chiefly an attempt to lighten the tone, perhaps an admission that the film's version of history is a stage-managed illusion. It isn't a persuasive illusion, though: three hours of battering with dogma leaves one — besides hungry and a little nearer death — with the settled conviction that the true story was a lot more complicated than anything we have been shown.