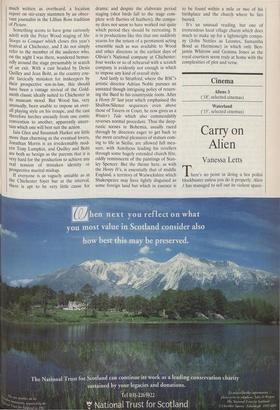 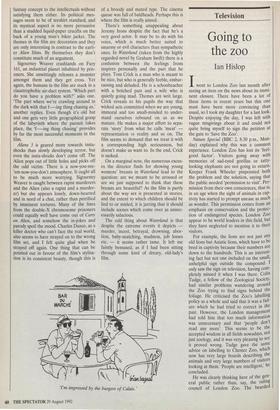 There's no point in doing a hoi polloi blockbuster unless you do it properly. Alien 3 has managed to sell out its violent space-

fantasy concept to the intellectuals without satisfying them either. Its political mes- sages seem to be of teeshirt standard, and its mystical aspect is no more persuasive than a studded liquid-paper crucifix on the back of a young man's biker jacket. The themes in the film are decoration and they are only interesting in contrast to the earli- er Alien films. By themselves they don't constitute much of an argument.

Sigourney Weaver crashlands on Fury 161, an industrial planet inhabited by pris- oners. She unwittingly releases a monster amongst them and they get cross. Yet again, the humans in the film are stuck in a claustrophobic air-duct system. 'Which part do you have a problem with?' asks one. The part where we're crawling around in the dark with that f—ing thing chasing us,' another replies. Even though it's old hat and one gets very little geographical grasp of the labyrinth where the pursuit takes place, the 1—ing thing chasing' provides by far the most successful moments in the film.

Aliens 3 is geared more towards insta- shocks than slowly developing terror, but even the insta-shocks don't come off. The Alien pops out of little holes and picks off the odd victim. There is a now-you-see- 'em-now-you-don't atmosphere. It ought all to be much more worrying. Sigourney Weaver is caught between rapist murderers and the Alien (also a rapist and a murder- er) but she appears lonely, down-hearted and in need of a chat, rather than petrified by imminent tortures. Many of the lines from the double-X chromosome prisoners could equally well have come out of Cany on Alien, and somehow the in-jokes and parody spoil the mood. Charles Dance, as a killer doctor who can't face the real world, also seems to have strayed on to the wrong film set, and I felt quite glad when he strayed off again. One thing that can be pointed out in favour of the film's stylisa- tion is its consistent beauty, though this is of a broody and muted type. The cinema queue was full of baldheads. Perhaps this is where the film is really aimed.

There's something unappealing about Jeremy Irons despite the fact that he's a very good actor. It may be to do with his voice, which is much better suited to smarmy or evil characters than sympathetic ones. In Waterland (taken from the highly regarded novel by Graham Swift) there is a confusion between the feelings Irons inspires personally and the part that he plays. Tom Crick is a man who is meant to be nice, but who is generally feeble, embar- rassing and deluded. He is a schoolteacher with a botched past and a wife who is quietly going mad. Themes are writ large. Crick reveals to his pupils the way that wicked acts committed when we are young, immoral and too small-minded to under- stand ourselves rebound on us as we mature. He makes a major effort to sepa- rate 'story' from what he calls 'meat' representation vs reality and so on. The film seems to demand that we treat it with a corresponding high seriousness, but doesn't make us want to. In the end, Crick is sacked.

. On a marginal note, the numerous excus- es the director finds for showing young womens' breasts in Waterland lead to the question: are we meant to be aroused or are we just supposed to think that these breasts are beautiful? As the film is partly about the way sex is presented in stories, and the extent to which children should be lied to or misled, it is jarring that it should include scenes which come over as unnec- essarily salacious.

The odd thing about Waterland is that despite the extreme events it depicts murder, incest, betrayal, drowning, abor- tion, baby-snatching, madness, job losses etc. — it seems rather tame. It left me faintly bemused, as if I had been sitting through some kind of dreary, old-lady's film.

'I'm impressed by the burgers of Calais.'