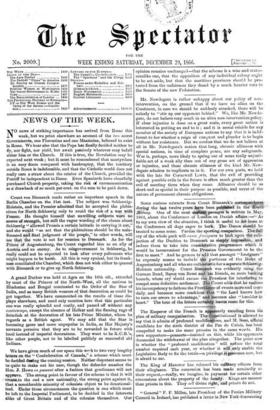 Mr. Newdegate is rather unhappy about our policy of non-

intervention, on the ground that if we have no allies on the Continent, in case we should be suddenly attacked, there will be nobody to "stir up our opponent behind." We, like Mr. Newde- gate, do not believe very much in an ultra non-intervention policy. If clear injustice is done on a great scale, every great nation is interested in putting an end to it ; and it is moral suicide for any member of the society of European nations to say that it is indif- ferent to her whether a reign of conquest and plunder is to begin without her resistance. But we confess that we do not believe at all in Mr. Newdegate's notion that long, chronic alliances with special nations, in time of complete peace, are any safeguards. War is, perhaps, more likely to spring out of some really unjusti- fiable act of a weak ally than out of any gross act of aggression or injustice, and these chronic alliances of the kind Mr. New- degate admires to implicate us in it. For our own parts, we hold with the late Sir Cornewall Lewis, that the evil of providing against possible evils in the future is often much greater than the evil of meeting them when they come. Alliances should be as short and as seial in their purpose as possible, and never of the nature of permanent chronic obligations.