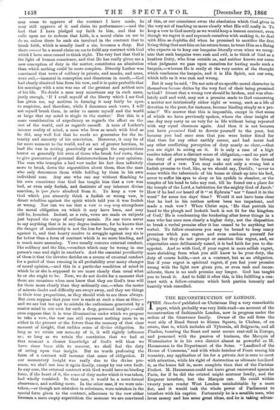 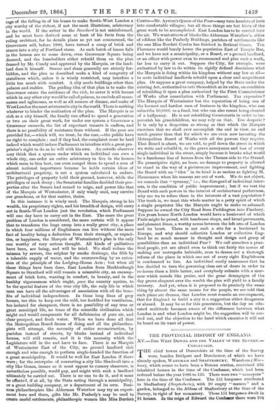 rilHE Standard published on Christmas Day a very remarkable paper, which probably was very little read—an account of the reconstruction of fashionable London, now in progress under the orders of the Grosvenor family. Owner of the soil from the west side of Bond Street to Sloane Square, in Chelsea, of an estate, that is, which includes all Tyburnia, all Belgravia, and all Pimlico, boasting the finest and most secure rent-roll in Europe, and possessed with the passion of business, the Marquis of Westminster is in his own district almost as powerful as M. Hau.ssmarui in the Department of the Seine. "Landlord of the House of Commons," and with whole batches of Peers among his tenantry, any application of his for a private Act is sure to meet with attention, while his right of destruction as ultimate landlord is, as the leases fall in, more complete than that of the Parisian Prefect. M. Haussmann could not leave great uncovered spaces in Paris, for if he did the evicted might murmur loudly, and the Emperor interfere, but the Marquis can. He could within twenty years render West London uninhabitable by a mere fiat, and it would task the whole power of Parliament to interfere with his caprice. Fortunately he is a sensible man, who loves money and has some great ideas, and he is taking advan-

tage of the falling-in of his leases to make South-West London a city worthy of the richest, if not the most illustrious, aristocracy in the world. If the writer- in the Standard is not misinformed, and he must have derived some at least of his facts from the ruling architect, for he details plans as yet not commenced, the Grosvenors will, before 1880, have turned a camp of brick and stucco into a city of Portland stone. As each batch of leases falls in the houses are to come down, even Grosvenor Square being doomed, and the leaseholders either rebuild them on the plan framed by Mr. Cundy and approved by the Marquis, or the land- lord does it himself. Stucco and sham generally are strictly for- bidden, and the plan as described seeks a kind of congruity of stateliness which, unless it is wisely restricted, may interfere a little too much with comfort. A city needs buildings other than palaces and stables. The guiding idea of that plan is to make the Grosvenor estate the residence of the rich, to cover it with houses which in any other city would be called palaces, to exclude all mean- noses and uglinesses, as well as all sources of disease, and make of 1VestLondon the most aristocratic city in theworld. There is nothing whatever to hinder the realization of the plan. The Marquis is as rich as a city himself, the family can afford to spend a generation .or two on their great work, for under our system a Grosvenor a Grosvenor succeeds, the list of expectant tenants is endless, and there is no possibility of resistance from without. If the poor are provided for,—which will, we trust, he the case,—the public have no right to complain ; and if they had, the complaint must be loud indeed which would induce Parliament to interfere with a great pro- prietor's right to do as he will with his own. An outside observer may think that a system under which an individual can own a whole city, can order an entire aristocracy to live in the houses which seem to him best, can even compel them to spend a sum of Almost national importance because he holds certain ideas of architectural propriety, is not a system calculated to endure. The privileges of property hold their ground, however, while the privileges of rank decay ; the Senatorial families doubled their pro - perties after the Senate had ceased to reign, and power like that of the Marquis of Westminster, if only wisely used, may survive -our grandsons, or for that matter, theirs.